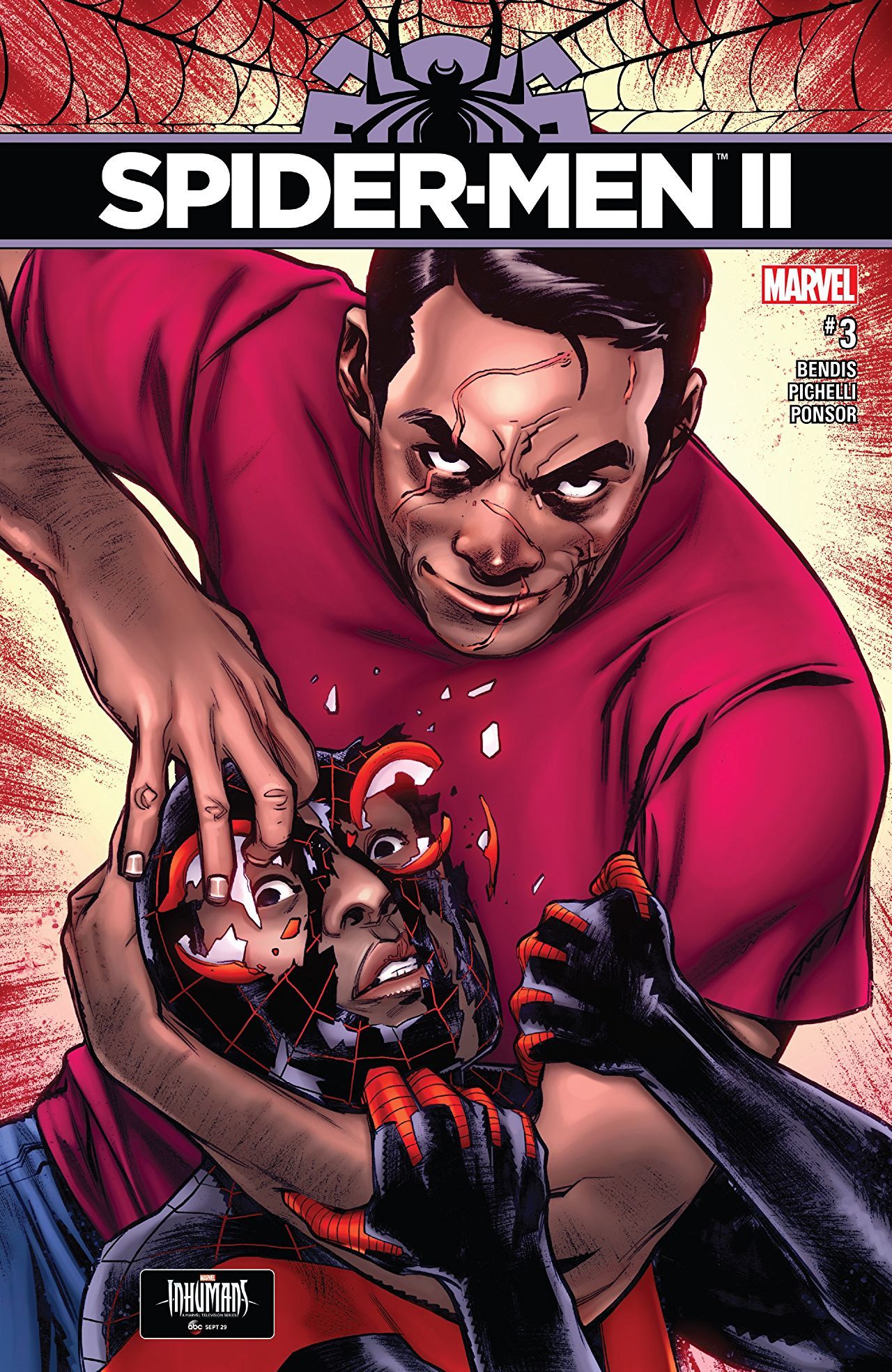 *Turns lamp on in a pitch black room while sitting in a chair with legs crossed* Brian Michael Bendis you clever sunvabitch. You got me. Youuuuuu got me. Spider-Men II # 3 takes us/ Travis Scott (way back) a few years on Rykers Island. Who should we see but a young Wilson Fisk arriving to do a bid up North. Fisk is probably in his early or mid 20’s, give or take, with a reputation behind him as an Arn Anderson (enforcer). The future kingpin is being told, however, that here in prison his reputation outside doesn’t mean anything in these close confines. Listen, even younger, Bendis displays the cool demeanor of Fisk as well as his trademark air of royalty and civility as being a huge part of his personality. That is, until you try the guy.

Yeah, even younger and all on his lonesome locked up, Wilson Fisk is still Wilson F’n Fisk. The turn then comes upon Fisk meeting a young (616) Miles Morales. Miles doesn’t really have a striking resemblance to the ultimate Miles we know today but that’s neither here nor there. What happens throughout the rest of this issue is pretty incredible as it’s a story about ….friendship. Yeah, that caught me off guard too. Now, this Bendis is obviously doing some tweaking and retconning of Wilson Fisk’s past to include Miles Morales (616) as apart of it, yet, it’s done so flawlessly that it doesn’t feel forced. There’s so much spread out through this issue that follows the initial meeting between Miles (616) and Fisk that it could really be an animated short.

We’ve known who the Kingpin is for years, how he came to power, and what he’ll do for said power. Bendis gives us a portrayal of another side of Fisk where dude is a fucking really really chill friend. We never really seen Fisk as having a friend. Not an assistant, business associate, but a friend and Miles (616) is that for Fisk. It’s weird to see but in a great way because Bendis makes Wilson Fisk a very likeable character through this one issue. Wilson Fisk has been a feared villain for over 50 years and in one issue, I’m feeling bad cause Bendis got me over her saying, “Maybe….he’s not that bad of a guy” when I know he is! Miles (616) isn’t overshadowed by Fisk either, we see his character traits and how these two are drawn to one another.

I been talking up Bendis’skill with the retcon world building, now let’s focus on Sara Pichelli’s art bringing this backstory to life. I’m fucking with her young Fisk interaction. I love it, the prison yard Fisk needs to be a unlockable skin when he’s finally in playable character the next Marvel vs Capcom game. Pichelli is able to capture the entire aura of what Fisk will become in his younger incarnation when in prison and then show him as this courteous polite gentleman (that some would call a front) in a sincere moment being a wingman for his guy Miles (616). Seeing, Miles’ rise with Fisk and how tight-knit they are as well, and his concerns about his scars give this new character a huge amount of depth in such a short amount of time. Again, I gotta state that I’m fucking with that.

You know you’re putting out a hit when you didn’t even have to include the heroes in the book for it to be a banger. You know you on one when you can add depth to a new character, retcon, world build from the past, all in one damn issue. I’ma Fisk stan ’cause of Daredevil, it’s hard to not be biased, especially when I’m getting some unexpected depth for Fisk with his loyalty, care, and friendship with Miles (616) while getting a fleshed out history for Miles as well, at the same damn time. I’m with it.

8.8 “Are we not saying phrasing anymore?” questions out of 10
Reading Spider-Men II? Find BNP’s other reviews of the series here.