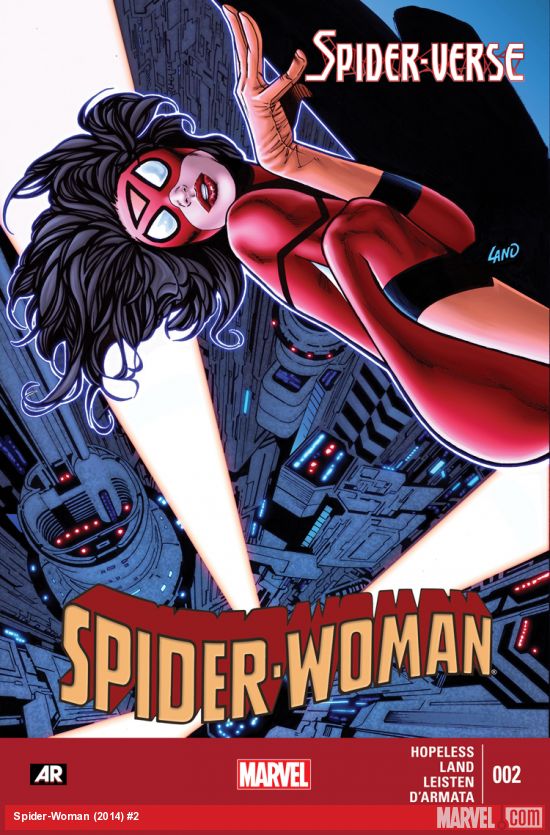 That’s what I hear in my head when I’m reading Spider-Woman #2 – Rocky’s trainer, Duke, cheering an effort that is inspiring, yet a little pathetic. Spider-Woman’s second issue is a step forward for Jessica Drew’s uphill battle, being more entertaining to read and easier to follow. The result is a comic that reminds me of the sixth installment of Rocky, when Duke explains a few harsh truths to the 93 year old fighter:

“To win this fight, you need speed – you don’t have it. Your knees can’t take the pounding, so hard running is out. And you’ve got arthritis in your neck. And you’ve got calcium deposits on most of your joints…”

In only its second issue, Spider-Woman had already dug a hole to climb out from. Starting in the middle of the Spider-Verse? Dig. Highlighting Silk more than Jessica? Dig. Drawing that stupid variant cover? Dig, dig, dig. But Hopeless is climbing his way out, fleshing out a Jessica Drew that is smart and cunning, more so than Land’s artistry would have you believe.

The issue takes place in Loom World, an unexplained, vague dimension, and home of the Lannister Twins who are the most nonsensical villains possible. They have terrible dialogue and very little explanation or development, so they come across flat at best, and rather annoying at worst. On the positive end, Jessica Drew’s character is really coming along, which is a huge upside. At first I was turned off by her bad jokes and ongoing internal dialogue, but they grew on me as part of what makes her character actually funny and became a welcome tool sharing Jessica’s craftiness and what makes her tick. Once this series gains some distance from the Spider-Verse and is done with the Inheritors, we have a lot of reason to hope for good things ahead.

Duke would tell Jessica “You need your own story plot – you don’t have it. Your variant cover already turned off respectable readers, so playing the feminist card is out. And your costar is more interesting than your character. And you’ve got weird villains chasing you…” But strangely enough, I look back somehow fondly at Rocky 6, so maybe this will turn out to be a good thing. And he only lost by split decision.