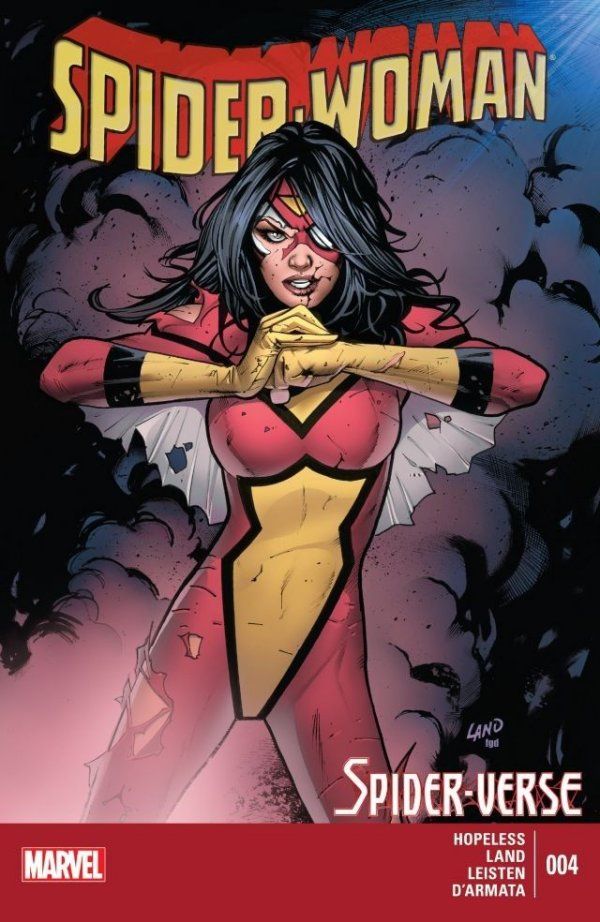 “Did you just… but you could’ve… are you kidding me?”

That’s my internal dialogue as I mutter through reading Spider-Woman – a book that I feel I should love but haven’t been able to get into yet. It’s like dating someone who meets all your criteria – education, character, basic beliefs – and becoming exasperated when it’s not working. Jessica Drew is meant to be a smart, clever, strong female character and yet I’m still pining to enjoy this series. It’s maddening.

The opening of Spider-Woman #4 is a great example leading to frustration. The scene is actually set up brilliantly: Jessica faces herself, arguing against the version of her that comes from another universe and whose views somehow diverge. They yell about responsibility, their backgrounds, and their resulting identities, and whether they should risk their lives to help save the people of Loom World from their own destruction.

The scene was set up. The tension had risen. And just when it could’ve finished strong, it ends with a punch line that reduced the whole dialogue to a joke. The tone of the comic incessantly forces itself towards frivolous, even when the opportunity presents itself for something awesome. The result is Jessica’s character falling flat when it could have been her own version of Batman versus himself, one of his greatest dialogues ever animated.

There were a few things I liked in Spider-Woman #4. Her BFF relationship with Carol Danvers was nice to read, and their exchanges were well done compared to Jessica’s angry-parent conversations with other Spider-people. The book’s humor finally felt genuine at times, with the exception of everyone bickering during a random alien attack. Ultimately, there’s one consequential event that happens in Spider-Woman #4: she quits the Avengers. That marks the end of the Spider-Verse and a new beginning for this series that suffered from being launched in the middle of it, so fans can look forward to the fresh start it originally deserved.

And how do you mark a fresh start? Spider-Woman is starting her new Avenger-free life with a new costume. Spider-Woman #5 is essentially Spider-Woman #1, a fresh start rid of the multiverse and out in the city as a solo lead. I look to shake it off, forget the past, and ride on to the brighter future of this series. The next issue is called “A Bold New Direction.” I hope so.

Catch up on previous reviews of Spider-Woman here.