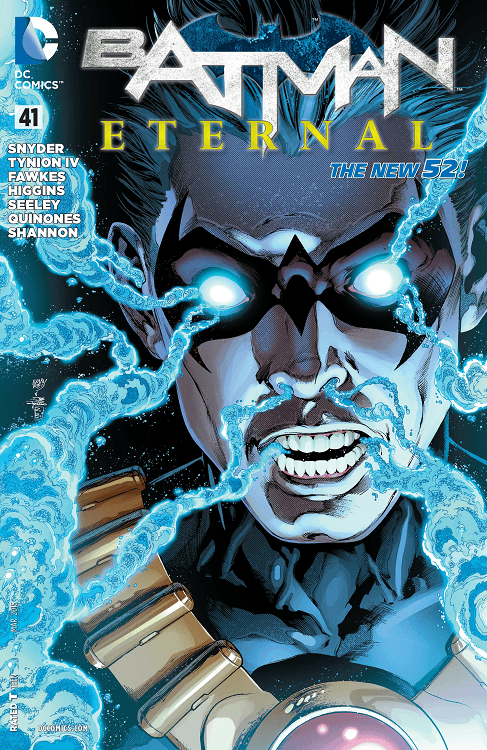 It’s only a matter of weeks until Batman Eternal’s first year winds to a close and each issue of the past month or so seems to come with a growing element of finality to it. As we come closer to finding out who’s been trolling Batman, Scott Snyder’s creative team seems to closing accounts, tying off long running loose ends, allowing character building to see some major payoff. But is it worth the wait?

This week, Kyle Higgins is back on scripting duties. Red Robin and the rest of the Bat-family assembles to take back the nanotech epidemic that has been slowly spilling out from the Narrows, but it might be part of a larger scheme that could prove to be more than they expected. The action beats were strong and Higgins seems to have the characters’ voices down well enough as far as advancing the plot, but Harper Row big upgrade moment felt a bit too telegraphed now that we’ve gotten to know the rhythm this book works under. And sadly, the artwork was a huge weak-link this week. It’s sort of sad because Joe Quinones seemed to mean well.

His characters are all very expressive and full of life, but the lack of detail is just too much. And for fuck’s sake, could just one artist take a little creative license and take the mouth off of Red Hood’s mask?! It’s not enough that it’s there to begin with, but now it has individual expressions, too. This shit has to stop, DC. Really, this is a fan saying he’ll do anything to put an end to this mouth madness. I’ll make the creative team grilled cheese sandwiches in return. I’m Southern so you know they’ll be delicious.

Bottom Line: Decent plot advancement, but the visuals were disappointing considering how last week showed off some of the best art we’ve seen in the series. 7 out of 10.