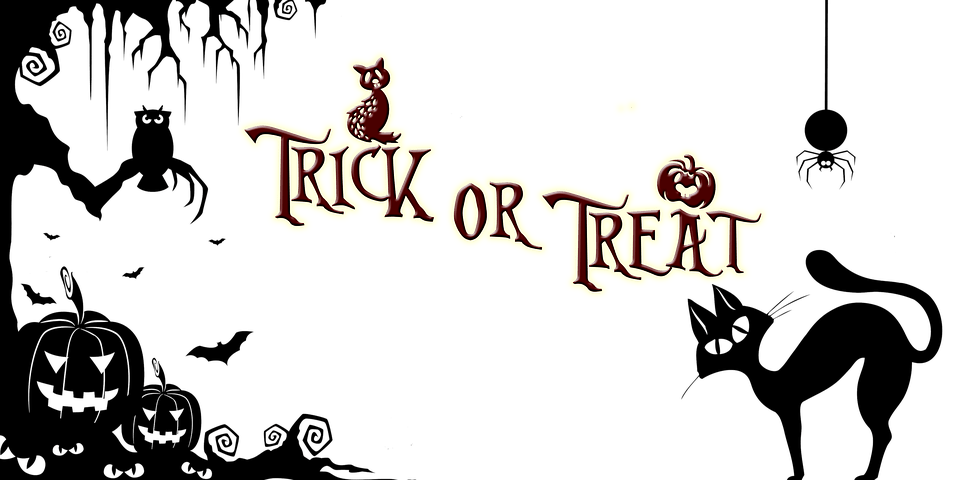 *inhales*
COME WITH US AND YOU WILL SEE. THIS OUR TOWN OF HALLOWEEEEEEEN.
I’ve been listening to this jam since September, when I got the faintest hint of a breeze in NYC. The Nightmare Before Christmas is a nostalgia roller-coaster, and my excitement could barely be concealed. Now that it’s finally the month of Halloween, I decided to take a stroll down memory lane with the rest of the BNP crew to talk of spooky times of Ocotobers past.

I love Hallows Eve man. Like more than a grown man should. Most of that stems from my college years at New Paltz. Those hippies go hard for this holiday. I’ve dabbled in costumes across the spectrum. I’ve donned the Spider-Man suit, been Samuel L. Jackson, Hugh Hefner, Agent J from Men in Black,

But there were 2 costumes that take the cake for me. The 1st was my take on the Muffin Man. This was dead smack in the middle of the college years so I was ballin on a budget. All borrowed items. The AEPhi sorority let me hold down their pink apron, I picked up a wicker basket from somewhere, got these ridiculous checkered pants from the rugby house, picked out my largest XXL white tee and stuffed that bad boy with rolls on rolls of toilet paper from my dorm. Finishing touches; I threw on an all white chef hat I got from my homie and stuffed my basket full of Little Debbie snacks and all throughout the night, I proceeded to bless those that I deemed worthy with a light snack to munch on. When you think about it, I helped dozens have an amazing night.

The other costume was James from Team Rocket. My wife and I did this one proper. The all white outfit, the wildly colorful hair, boots, and gloves. All we needed was somebody to be Meowth. We were a big hit at the party that night. Mostly because we kept saying “Prepare for trouble. And make it double!”. 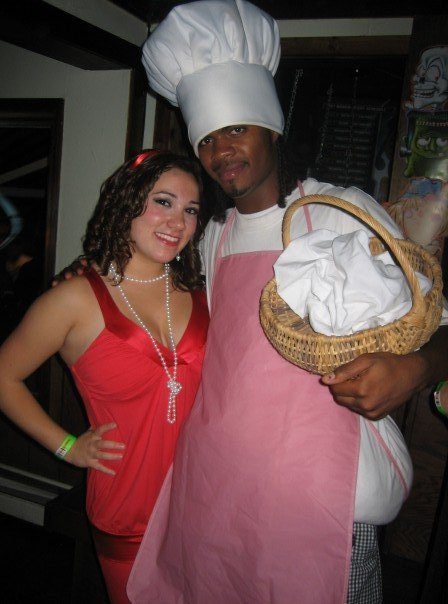 The best Halloween I ever witnessed still stands as 2014’s Halloween. Fuck what you were wearing and fuck what i was wearing, I saw a costume that blew everything i thought I knew away. I was walking out of the train station on my way toward a costume party, when I looked up and was taken back to the Monday Night Wars. I tell you no lies, I was taken back to the take over because as I lived and breathe, right before me stood the Black and White NWO faction.

To see this group of friends dressed up as wrestlers from an iconic faction is one thing but seeing that there were all Black? Come on, man. One dude had the Buff Bagwell hat too? Buff Bagwell?! Do you even know how deep cut of a wrestling reference that is? I was not letting these guys get by me without a picture. Look at that shit, look at that picture. Recognize greatness when you see it. This group costume is the definition of “Too Sweet”. 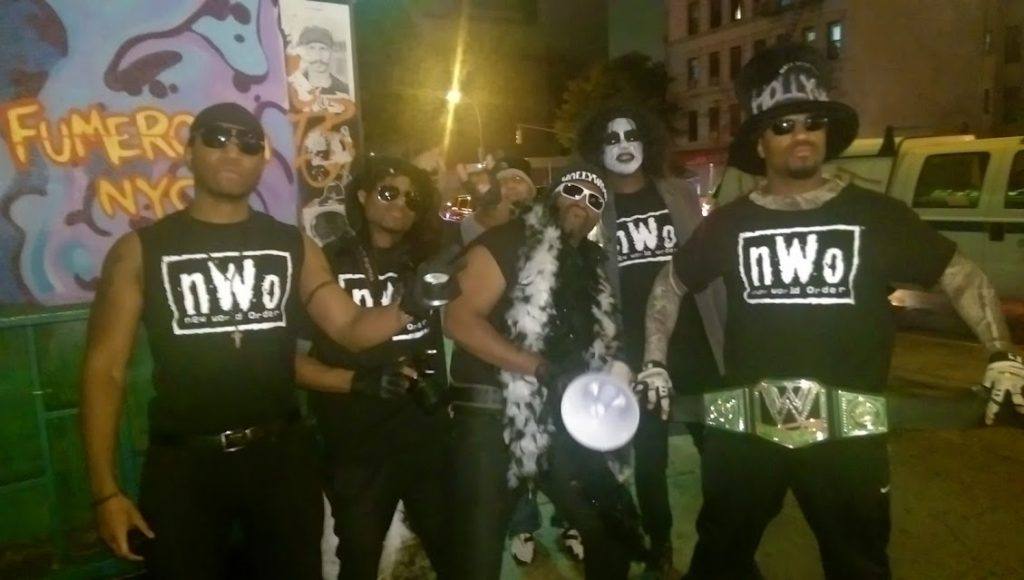 My kid has seen all of the Star Wars movies. Chewbacca was one of her first words. She thinks that the movies are actually about Anakin Skywalker/Darth Vader and Vader is the hero of the saga. For me Darth Vader is the villain. For her, Vader isn’t evil, the Dark Side isn’t a place you go, it is a place you go through to get to the Light Side.

This isn’t really an incorrect narrative reading, says my literary side, but it is COMPLETELY WRONG for my gut reaction.

Into this family conflict comes Clone Wars. That’s where my daughter saw Asajj Ventress for the first time and fell in love. Why shouldn’t she? Ventress is a powerful character with a cool outfit and two lightsabers. She takes on Obi Wan and Anakin, playing them both for fools on multiple occasions. She’s sassy and threatening, and generally badass from her bald head to her booted feet. She is not a pink princess in a ballgown.

With a little thrift shopping and some judicial Amazon work, we were ready. We sprung for the extra awesome lightsaber that lights up and makes noises, because Star Wars. For less than $100, I took my usual princess daughter and turned her into a black-clad assassin Sith. The family costume came easily after that — I may just have had a black cowl in my closet. When she has her lightsaber out, she now practices her force choke — which consists of her wiggling her fingers and looking menacing until you are overcome by how adorable it all is and fall to the ground laughing, I mean, um, choking. Plus, I get to embrace my Dark Side too. Can you tell we’re looking forward to the next movie in December? 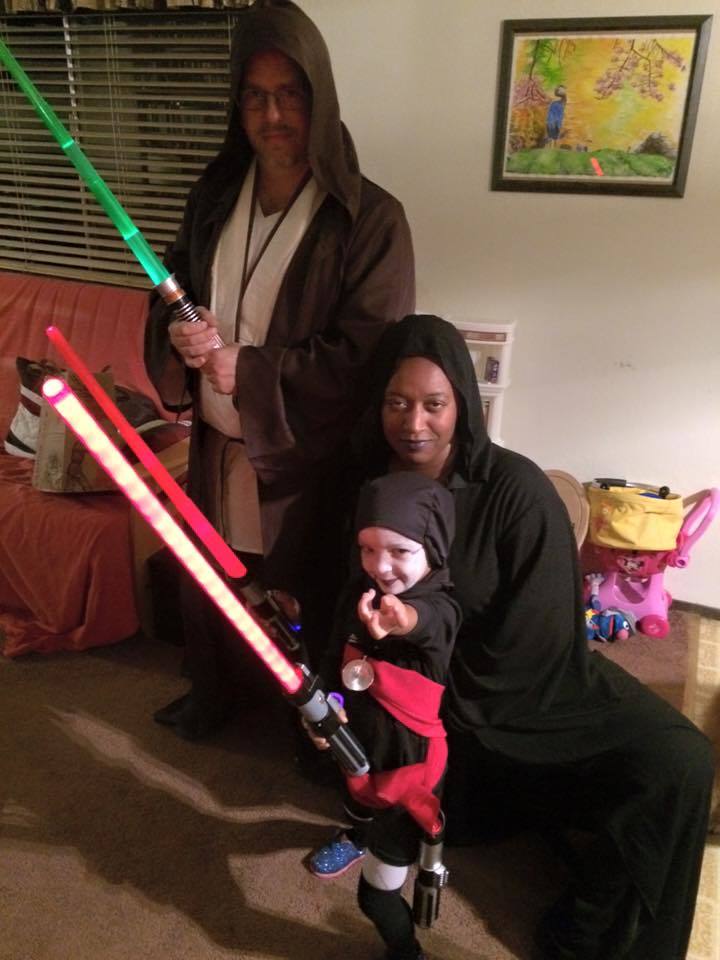 Back in 1999, I forgot about Hallowe’en. Okay, maybe I didn’t forget exactly, but I didn’t bother to put together a costume. This was right before the election that would win George W. Bush the presidency, destroying whatever faith I had in the American electorate–the first time, anyway. When I got to work that day and found out there would be a costume contest, I got an idea:

I raided the supply closet, printed out some of the choice Dubya quotes curated by Slate.com on file labels and stuck themselves all over myself, and finished it all with one of the those “My Name Is…” tags–with the name “M. Pending Doom.”

I ended up winning first place for Most Creative Costume.

For a little bit of background information, I’ve always loved the shit out of Halloween. I love the candy(I’m a notorious sugar whore), the decorations, and scariness (in small, tolerable doses). I ESPECIALLY love the costumes (I am a cosplay diva after all). One of my favorite memories is when my boyfriend took pictures of my Wednesday Addams cosplay before we went out to a Halloween party. We were chilling in his room, taking pics of me looking morbid and ghouly-perfect. It was one of the best times of my life. Who doesn’t enjoy spooky photo shoots??? 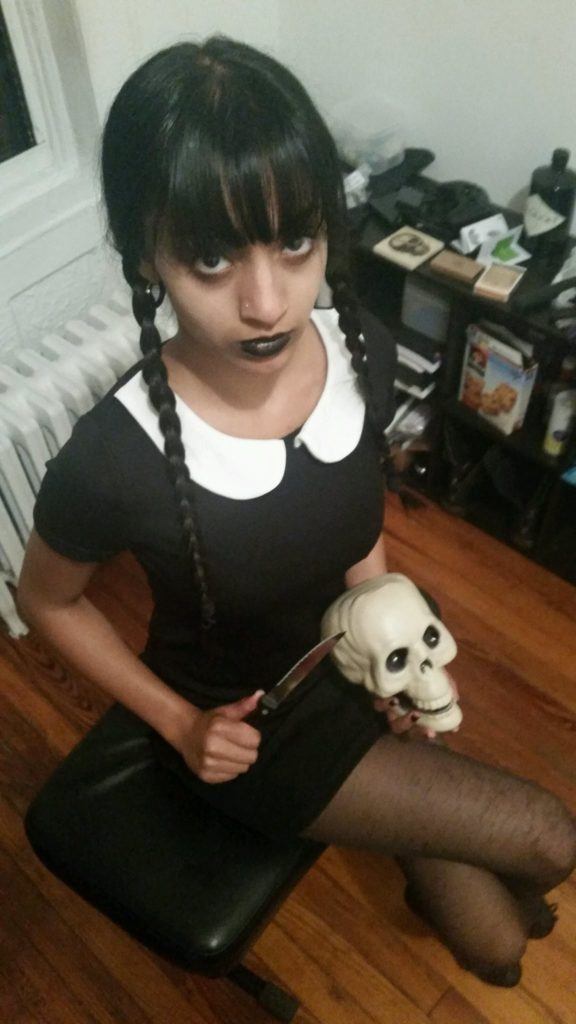 As you can see, the BNP staff consider Halloween a sacred time of year. It is a cherished and much-respected time for us all, and we hope that 2017 will bring us another bloody-good time. How are you all celebrating? Take care in whatever concoctions and outfits you come up with, and have a safe and fun holiday!