And you say National City all over CW!

This year, Supergirl is tapped to set up this 4 night crossover event, that we find out is more like a 3 show Flarrowverse crossover with Supergirl slidin up in all the DMs for the rest of the week. Luckily the episode did work and set up the wannabe Super Friends story nicely.

Off the rip, Thanksgiving Dinner at the Danvers spot is lit AF. Kara’s whippin up 3 second eye laser beam turkey. The girls have Dr. Eliza Danvers over at the crib putting Kara on to Mon-El’s obvious crush. Kara’s like naaaa then instantly sprung at the thought he might want some super cheeks. Her little giggle and smirk – hilarious. Mad 7th grade. Everyone is around the table giving thanks when a gigantic breach rips open a space time hole above the table.

DEO: Winn scans for Tachyons to find out about the breach and the team discuss the wild ass revelation that Lillian Luther is the head of Cadmus. They wanna figure out what Lena knows about her mom’s evil doing so reporter Danvers goes over to Lena’s office to ask her a few questions. Kara soon finds out that mom and adoptive daughter never really vibed. A weird little exchange goes down when they talk about the changing of Luthor Corp to L Corp then Lena calls her mom as soon as Kara dips.

Alien Stonewall Inn: Mon-El in his bag, drowning his crush sorrows away when when notices J’onn sitting at the bar. He calls his homie and when he doesn’t respond the Daxamite follows Hank outside and presses him, then gets tossed around lil a rag doll as he finds out the sociopathic difference between J’onn and Cyborg Superman. Mon-El runs back in to find out that all the aliens inside the bar have died. Back at the DEO, they quarantine Mon-El as he debriefs the squad. Alex thinks her boss ass doctor of a mom should be brought in to analyze the airborne killer situation.

L Corp: This Luthor relationship strange as hell. Lena hates on her mom for her Lex favoritism then asks mom dukes what she’s up to. Lethal Lillian Luther plays it cool like she aint tryna eradicate all the aliens. Lena warns her mom that a reporter is sniffing around and tells her she knows she’s lying trying to throw her off the evil trail cuz she said that she loved her. You knew she was lying cuz she said she lives you, Lena? THATS some cold ass shit right there!

DEO: Supergirl and Mon-El are both quarantined just to play it safe…so they decide to play some good ol Game Night Monopoly! Supergirl decides its a good time to have zero chill and drops the bombshell question.
Supergirl: Do you like me?
Mon Mon: Of course! You’re great. You helped me get used to this planet and hav–
Supergirl: Na son, you know what I mean. You tryna mate with this Kryptonian sex pistol?
Mon Mon: I mean you’re cute and all bu– aaaaannnnddddd he starts having convulsions.

Turns out Mon-El’s is slightly infected but Eliza figures out it’s an airborne Kryptonian virus and can’t be spread organism to organism, so Supergirl is good. Supes puts the pieces together that Cadmus must’ve used her blood to get into the Fortress of Solitude and created this chemical warfare Trump card. 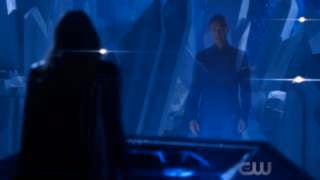 Fortress of Solitude: Supergirl flies out to the Arctic region and is attacked by her little R2D2 assistant when she gets there. She makes quick work of it, then sees that Cyborg Superman was looking into some Project Medusa when her Kryptonian dad pops up in a hologram and keeps it real. He and the military forces of Krypton developed this virus of a weapon to protect Kryptonians but kill all other aliens.

DEO: Mon-El iiight cuz he’s a Daxamite and their anatomy is similar to Kryptonians, but gonna die if they don’t find an antidote before it ravages his system. J’onn is doing his best Joe West impersonation convincing Kara that her parents were actually good people despite creating a genocidal virus. Moms figures out how they plan to weaponize the virus on a large scale then Kara bounces to do battle with Cyborg Hank (Im calling him that cuz his ass is Fake Hank, not Clark). They go blow for blow in the Super Cyborg battle until the Maggie led NCPD shows up and unloads 800 rounds into the cyborg. Supergirl is about to mop up the floor with his shiny ass but he shoots a hole though Maggie’s shoulder and makes a break for it.

Alex patches up Maggie then finally comes to terms with her new normal. She realizes her being gay isn’t/wasn’t all about the huge crush she had, but about herself. In my head, I’m throwin the illest side eye cuz I know the writers are finely crafting this lesbian love story that is most definitely going down ASAP.

L Corp: Kara goes back to Lena’s office for help. She tells Lena who her mom really is, but had a very different reaction go down following the reveal. Lena jumps down our girl’s throat and accuses her of lumping all Luthers in the same boat as criminal of the century, Lex. Lemma dismisses her and was lookin all sorts of evil.

DEO: Supergirl all sad that Mon-El is comatose, hovering over him like an abandoned puppy she brought home and got sick. Mon-El Wakes up knowing Dr. Danvers thinks he’s gonna die. Kara tells him that her birth father created the virus and feels responsible for his condition. They get cozy as he ribs her cheek to settle her nerves then goes in for the kiss he’s been waiting for! Then falls righttttt back to sleep! Classic male privilege.

L Corp: Lena calls her mother over and tells her that she knows she/Cadmus sent that Cyborg goon over to steal that Isotope 254 from L Corp. Mom is baffled to hear her daughter tell her that she didn’t need to resort to thievery, she just needs to ask for Lena’s help. Dun Dun Dun!

DEO: Cadmus hacks the city’s PA system again and lets everyone it’s about to go down at the port. Supergirl tells J’onn that she doesn’t want him to risk his life in this battle that’s bound to kill most, if not all aliens. She forgot one thing tho, J’onn the realest. Homie wants to die fighting with his alien brethren, if it comes to that.

Down at the port, Lena and Lillian prep their alien doomsday device and the hands down greatest line of maybe the entire series is dropped by Lena.
Some mothers wear a locket of their children, you wear the keys to a bazooka.

Then mom dukes has the audacity to clap back with, “It’s a rocket launcher.” Then forces Lena to prove her evil ways and tells her she has to be the one to launch the rocket to eradicate all the Alien races. That’s some next level evil motherly love. Supergirl and J’onn get there and try to convince Lena to not become the next Hitler. Lemma responds with a Heil Hitler salute and fires that bad boy. Supergirl takes off after the Syria sponsored rocket and J’onn goes after the cyborg giving his face a bad name. J’onn and Cyborg Hank go at in on some heavyweight title bout shit. These dudes at the port throwing shipping crates at each other like they water balloons! J’onn unleashes his new White Martian form and does battle while Supergirl tracks down the rocket and snags it before it reaches its destination. Too bad Cadmus the most diabolical mafuckas out there cuz these villains had a backup plan. They detonate that shit mid-air and alien destroying spores are released across the city. Supergirl jets back to the port to drop kick the Cyborg unconscious and witness J’onn embracing his impending death…but nothing happens. Lillian looks at Lena and immediately knows her daughter is responsible for the fake out. Turns out Lena had that good guy blood running through her veins the whole time. Called it. Knew she wasn’t an evildoer.

Alex gets a knock at her door, even though her apt has been nonexistent up until now…when it’s needed, if ya know what I’m talkin bout. It’s Maggie with a pizza pie. Pizza and apologies. Pizza apologies and I think you know what else. Bout time girls!

LENA LUTHOR IS A HERO. Kara gets home from her wild genocidal day to find Cisco and Barry all up in her apt like Bruh Man from the Fif Floor. Cisco makes a pretty sweet joke, Barry tells her that they need her help on OG Earth and the 4 night crossover event has officially popped off!