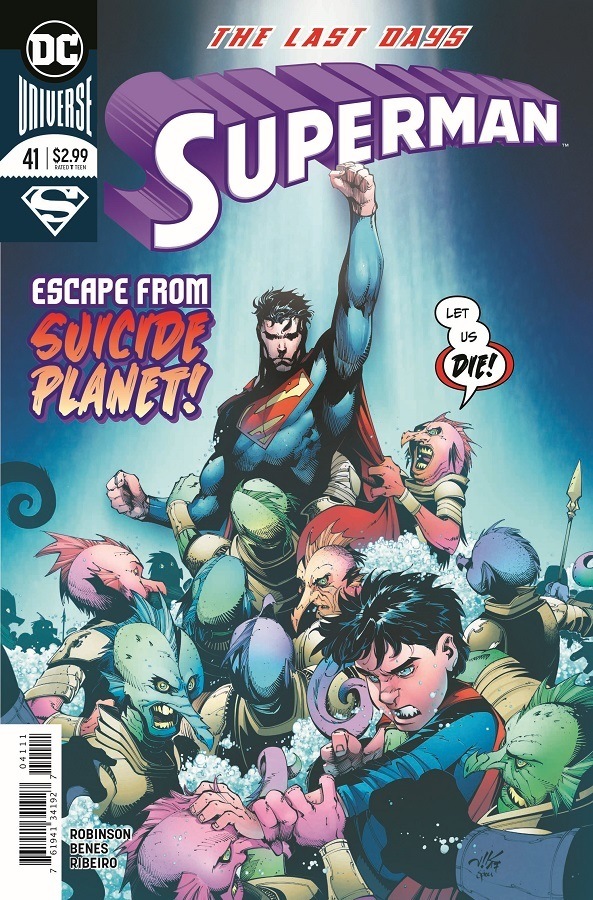 Superman is an absolute paragon of human virtue. Despite being of Kryptonian descent, he was raised on a farm in Kansas and instilled with human morality. And I specify human because as Robinson brings it up constantly in Superman #41, moral relativism is a very real thing and it’s not entirely right to try and impose one’s belief onto someone else. Or maybe it is? It’s a really murky cosmos, and while I can appreciate Robison’s attempted journey through religion and science dynamic, it feels like 20 pages wasn’t enough to get everything across. There are various moments that just stifle the momentum of the book.

In this installment of The Last Days, we pick up shortly after the end of the Superman #40, where Superman and Superboy are getting some exposition from the scientist, Klain, who is attempting to save his species from religious zealots. If it sounds a little over the top and on the nose, it’s because it’s both of these things. There’s not a lot of subtlety or nuance in the opening pages of the issue, and while Robinson tries to bring it all together, he positioned the two sides so diametrically that the conclusion feels unearned. Superman, an entity who very well may functionally be a god to humanity, and Superboy, essentially a demigod, attempt to muse on this moral relativism quandary and don’t really come up with any meaningful thoughts, let alone answers. It’s not fair to expect answers to the complicated topic, but there are a lot of implications that are not addressed properly.

Textual narrative aside, Benes on art and Dibeiro on colors do a stellar job bringing the story to life (pun very much intended). The Suicide Planet looks otherworldly, with a deep sea sort of glow to the alien technology. Details just pop off the page and there are some incredible stills and truly breathtaking moments.

While I can appreciate the attempt, this retread of the science and religion dichotomy with a Superman spin leaves me wanting more.