Superman, like any good hero, has been on a quite the journey of late. After Geoff Johns and John Romita, Jr took over in issue #32, Superman has become not just relevant, but an enjoyable read again. With the sagging creative that came before it, Johhs, the physician, came in to due some patchwork and get Superman as a comic book back into the consciousness again. For Johns, it was a short term ride this time around as he exited at issue 39 (#40 was written and drawn by Romita, Jr). Now, post Convergence, Superman has a new writer in Yang and seemingly a completely new direction. The biggest holdover from the previous issues that show up in this issue is Superman refining his Solar Flare ability and the fact that he has told his story to Jimmy Olson. An anonymous tip comes in about a weapons deal going down, so Jimmy and Clark go to investigate. And then shit gets crazy. 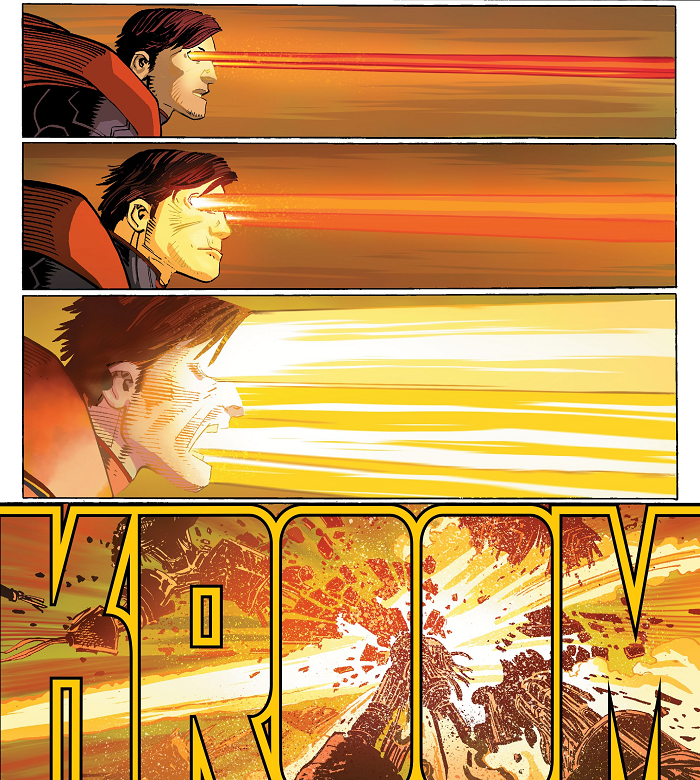 This is a pretty good issue and a very good starting point for Yang in his first Superman book. He is aided by the consistent and stalwart art of Romita, Jr. Not only in the quality that Romita, Jr produces, but also in retaining him as a partner on this book and keeping a continuity from Johns’ arc. The book feels familiar because of that and not necessarily brand new. Yang builds a cool story, gives Clark an invisible threat, a person to save and a mystery to solve. It all works very well together and allows us to see Clark / Superman in a slightly different circumstance than we’re used to.

If you’ve read Action Comics #41 (that came out three weeks ago) then its important to note this comes before that story, so it might feel slightly disjointed, but only by comparison. As a self contained story, it’s a very promising start to this specific story and one that should keep you engaged.