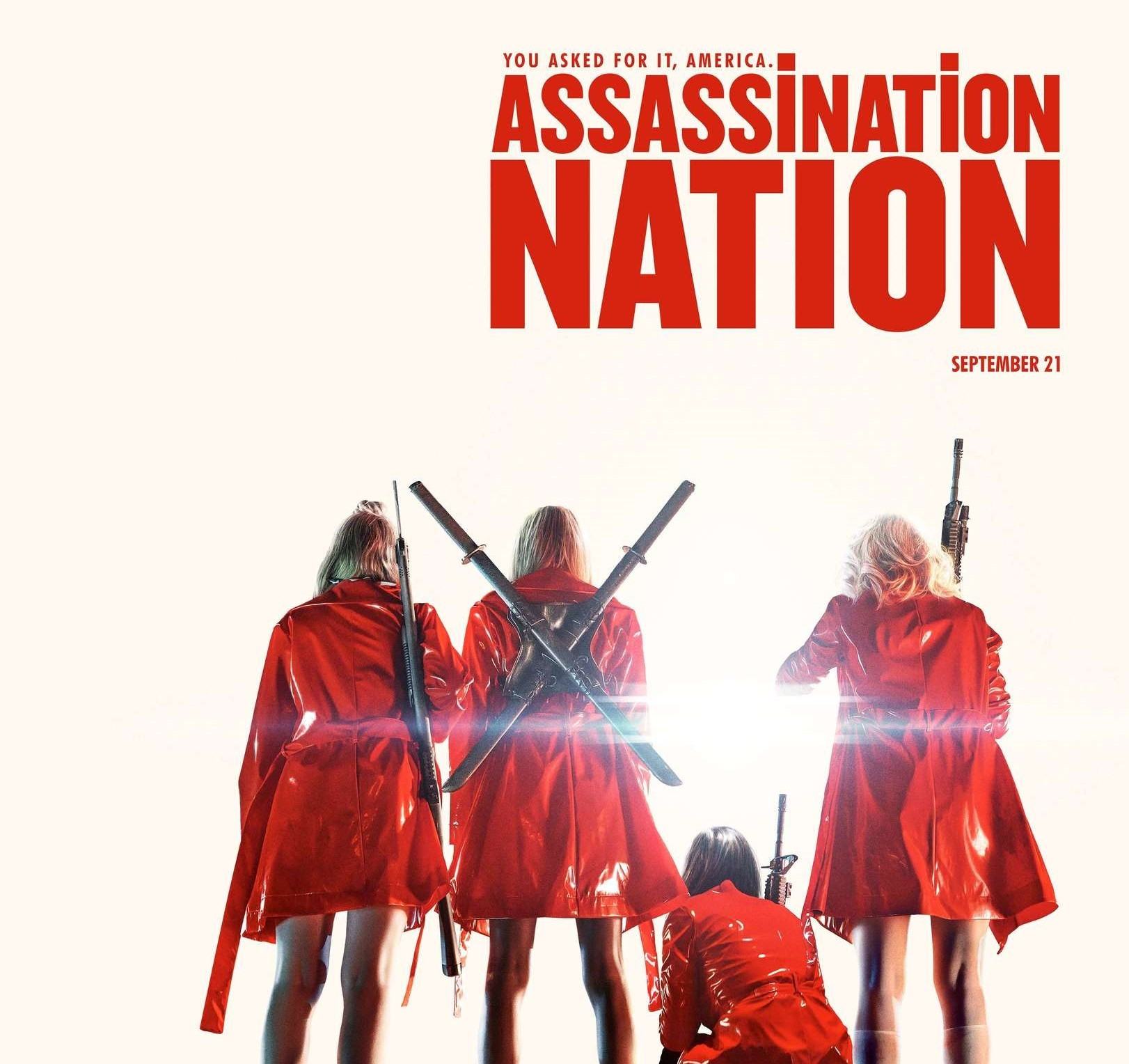 In the new movie Assassination Nation, the small town of Salem, Oregon is brought to it’s knees after a hacker leaks the private text messages, emails, and internet search history of its citizens. High school senior and staunch feminist Lily (Odessa Young) and her trio of equally empowered friends find themselves at the center of the hysteria when a murderous mob falsely accuses Lily as the source of the hack, despite her own leaked texts outing her affair with a married man. While the film is mostly innovative, the dark comedy has a few glaring issues, with one towering above the rest.

Assassination Nation is all dark, no comedy.

I first heard about Assassination Nation via trailers on Instagram, and while I knew to expect some violence neither I, nor the friend I invited, was ready for what we saw. The movie played up to its hard ‘R’ rating with multiple attempted rape scenes, graphic fight sequences, and gallons upon gallons of blood (one guy even gets his throat slit and bleeds out on top of another person). And despite the rather lengthy list of trigger warnings – some cheeky, some not – displayed at the top of the film, it’s still a lot to experience, especially considering today’s political climate. But maybe that was exactly the point.

Odessa Young’s “Lily” is a witty, sarcastic suburban white teen with a knack for empathizing with others, all of which are characteristics that put her at constant odds with her conservative parents. Even her high school boyfriend is a louse, requiring oral sex from Lily but too scared to perform it on her. But Lily’s BFFs are her true support system.

Openly transgender Bex (Hari Nef) is perhaps Lily’s closest friend who also happens to have the arguably more dramatic plotline. Bex’ secret love affair with a popular jock is both painful and heartwarming to watch as they both navigate the jock’s closeted status and exploration of his own masculinity. Sisters Sarah (Suki Waterhouse) and no-nonsense  Em (singer/songwriter Abra) round out the Fab Four. The question as to whether one or both of the sisters were adopted by their mother Nance (Anika Noni Rose) is left unanswered, but the tight bond of their family is crystal clear. As the town descends further into chaos, Nance and the four friends realize that they’re the only ones who can save themselves from a bloodthirsty mob hell-bent on maintaining the male-dominated social order.

Assassination Nation does an excellent job of highlighting the double standards women face when compared to men. When her affair with the married father of a child she used to babysit is exposed, it’s Lily who suffers the bulk of the consequences. She’s thrown out of the house, assaulted by her boyfriend and his pals, harassed in the streets, and threatened with rape. After her paramour’s wife learns of the affair after the citywide hack, even she blames Lily for the implosion of the marriage.

But while Assassination Nation soars in its examinations of gender dynamics and abuse of various forms, it falters in the mechanics of how the story focuses the wrath of the leaks squarely at the feet of our four heroines.

Earlier in the film, the mayor’s cross-dressing proclivities are exposed and the Black male principal is erroneously deemed a pedophile over misinterpreted pictures of his young daughter in the bathtub.

While Lily in particular leads thoughtful, nuanced debates on the fates of both men and society’s obsession with over-sexualizing young girls, both situations are quickly put aside and no longer referenced in the film. What follows is an eventual discarding of previously artful messages of female empowerment, digital privacy, and toxic masculinity. At that point it’s as if the film grows weary carrying the weight of cleverness or the filmmakers realize there are only 20 minutes left to wrap things up. Instead of an insightful connection back to the smartly woven narratives presented earlier in the film, we’re left with a random idea dump via a taped monologue by Lily that ends things with a whimper instead of a bang. 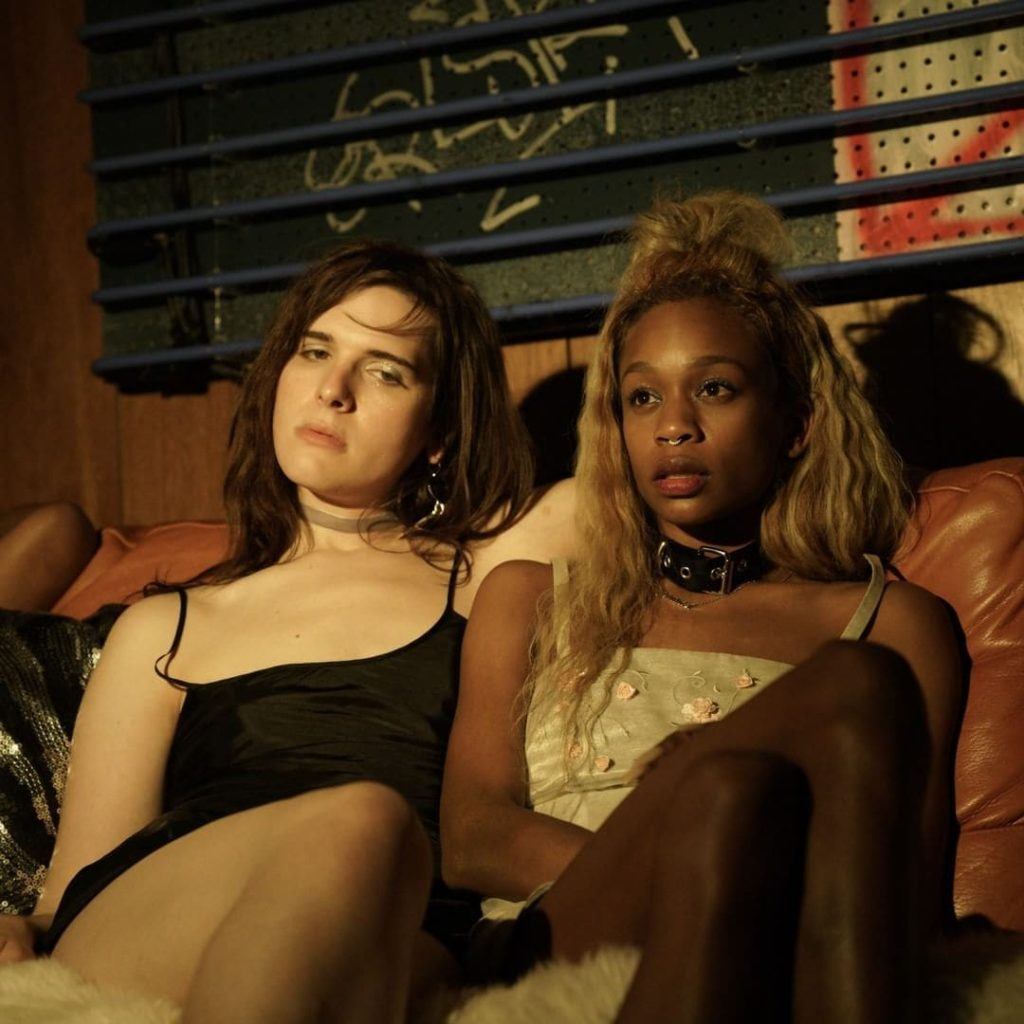 But perhaps having Salem’s wrath fall squarely on Lily & Co. instead of the town eating itself alive in the wake of the hack was entirely the point. Consider sexist school dress codes, rape victims being blamed for their assaults because of how they dressed or what they drank, or even the infamous Salem Witch Trials of the 1690s of which Assassination Nation is clearly a nod to. When it comes to “The Blame Game”, women more often than not come up short, whether the deserve to or not (NEWS FLASH: They don’t).

Other things that aren’t explained well in Assassination Nation are the dearth of Black residents in Salem followed by a random bevy of Black folks towards the end of the film. There is a weak explanation behind the FBI’s disinterest in a citywide data hack. Em’s hair is tangled and messy most of the movie, only to be mysteriously pressed to the Black diva gods during the film’s kickass climax. Someone behind the camera needs to check out Nappily Ever After on Netflix. 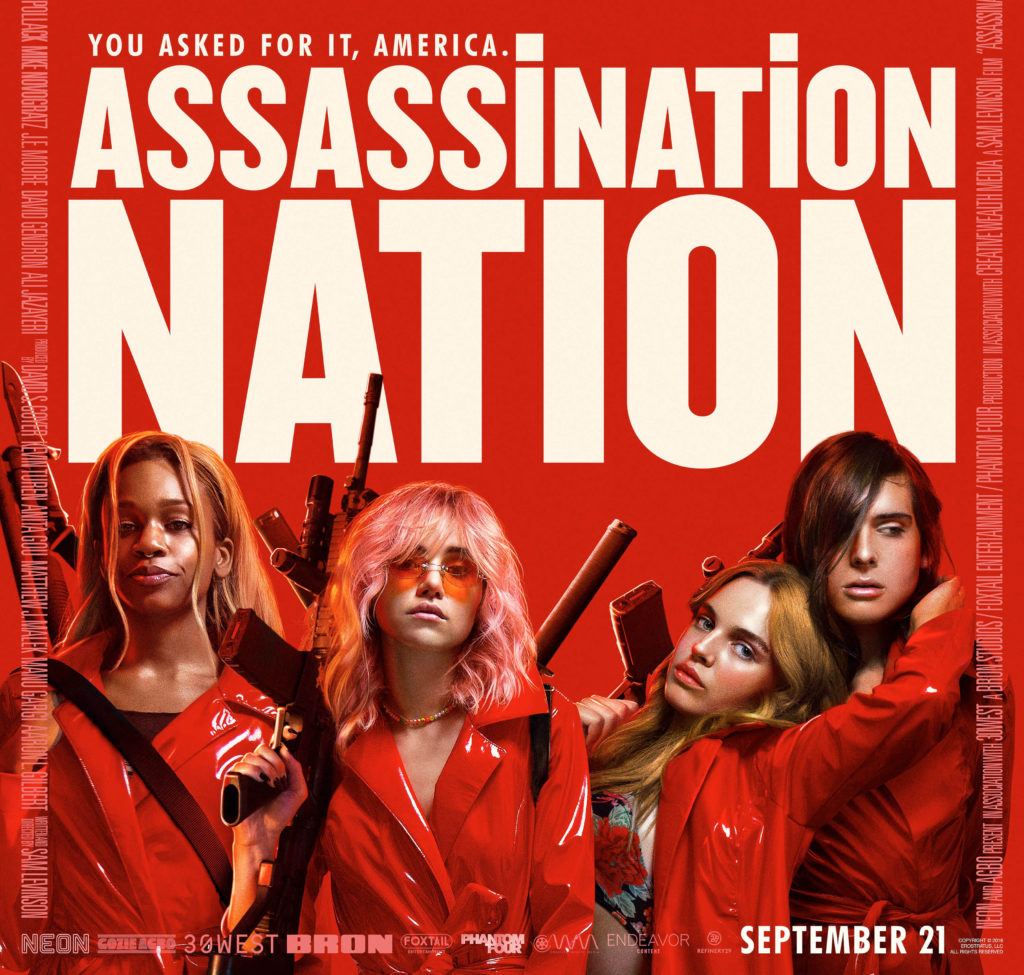 Assassination Nation is a smart movie that explores some serious themes that are especially topical in the wake of the #MeToo Movement, President Trump’s overall antics, and the Supreme Court nomination of Judge Brett Kavanaugh, a man accused of sexual assault when he was in high school.

While it stumbles on more than one occasion and is extremely graphic, its message is one that needs to be heard. It’s not quite worth paying full price for, but if you’re looking for a thought-provoking, albeit graphic matinee feature or eventual Netflix release, Assassination Nation is a good bet.

Assassination Nation opened in limited release in the U.S. on Friday, September 21, 2018.