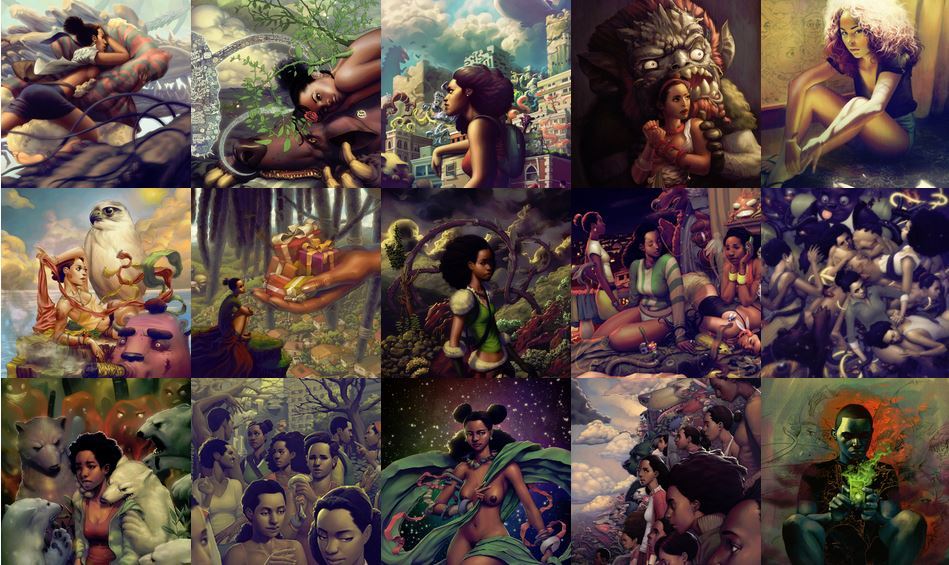 Black Nerd Problems: First let me say, for such a long time, I saw, reblogged, and shared your art on social media sites without any clear idea of who you were — of who the artist was. So now, it’s finally great to put a name to the work and a face to a name. Your artwork has always blown me away, in a good way of course, because of the subject matter. I feel like I’ve seen everything from hints of afro-futurism to creatures akin to what one could imagine from a Studio Ghibli film: wondrous and strange. Some even see your body of work as “baffling”. Can you touch upon how you came to be inspired to create such pieces?

Paul Davey: My sketchbooks are mostly filled with nonsense. It’s honestly the source of my creativity, doodling. I advise everyone, including non-artists, to try it. Just put the pen to the paper and see what happens. Preconceived ideas about what you should draw really get in the way sometimes. I haven’t made time for it lately and I feel guilty. BNP: I can recall reading an interview of yours where you were asked if you thought that you would gain a larger clientele if you drew more Caucasians. The abundance of black and brown bodies featured throughout your art caught my eye immediately because I’m way too familiar to NOT seeing black and brown folks in digital art. Thinking back, how did that question make you feel? And now, in present day, how does that question make you feel?

Paul D: Having a huge following would be nice but that’s not why I make art. I can’t think of a less corny way to say this: I do it to express myself.

It’s the same reason I don’t do much fan art or many commissions. If I don’t have a real personal connection to the work, I’m probably going to hate every second I spend on it. I’m not saying I’m not a fan of anything — countless drawings of Sonic The Hedgehog and Sonic-y OCs in my teenage sketchbooks would prove otherwise — but right now I feel like my time is better spent developing my own stuff.

I can understand why people ask. I’m one of the odd ones out. Soooo many black artists primarily depict white subjects. I can understand having to in order to make a living, but if the only black face I see on an artist’s page is in their profile picture, they get the ol’ side eye.

As for the question itself, I just wish it didn’t have to be asked. 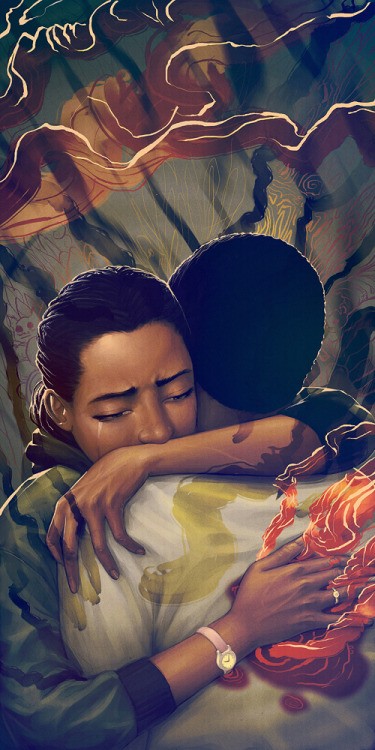 BNP: I’ve been curious about your user name/pen name/artist name: Mattahan. I wasn’t sure if it was a nickname or an alternative spelling of something, but turns out it’s actually a (close?) pronunciation of  Matterhorn, a Jamaican cigarette brand. So you’re Jamaican born, moved to the States as a kid and moved back (and then moved back to the U.S.)  Do you feel like any of your artwork represents your Jamaican heritage? Anything from your childhood inspired some of it?

Paul D: I first saw the mountain on a pack of cigarettes when I was 12ish. I was writing an embarrassing comic series and was searching for a name for the main character. The other characters were named after other cigarette brands popular in Jamaica at the time. All the materials from that project are tucked away inside a zip inside another zip on a secondary hard drive in an old computer in a box under a bed at my mom’s house, but that name stuck.

I think all of my work represents my heritage in one way or another. I looked out my window to the hillside for reference when doing the backgrounds in a lot of my pieces, and to people close to me for inspiration.

BNP: Can you share one of your favorite pieces and why it’s a favorite?

Paul D: My favourite piece (at the time I write this) is Lights Please. It’s named after a J. Cole song which I now find kinda meh, but at the time it brought up a lot of feels about a relationship I was on my way out of. It’s my favourite now because it perfectly illustrates the nature of our relationship.

BNP: You’re also attached to Cleversoft Studios for art for a new and up-in-coming video game titled EarthNight. If you don’t mind giving us the short version of how you came to be involved in the video game industry? Also you’ve been promoting EarthNight currently, right? How has that experience been? 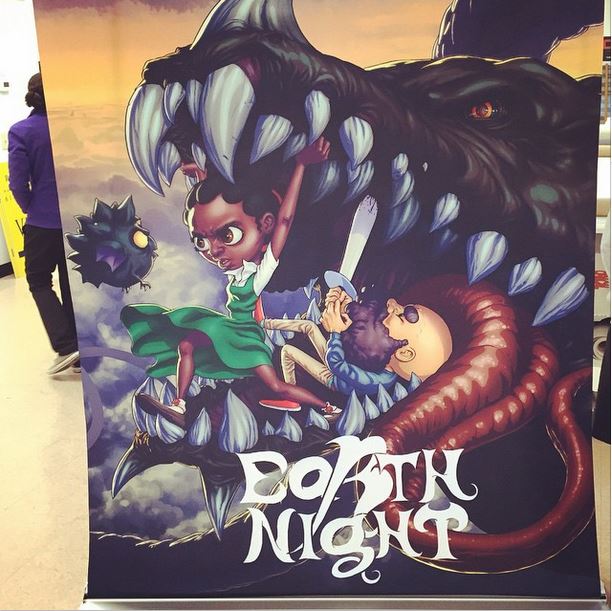 Paul D: Cleaversoft’s Rich Siegel contacted me some years ago about doing icons for some of their apps. When that was done he expressed interest in making a game centered around my art and asked if I had any ideas. Thus, EarthNight. Back then it was called Dragon Runner but apparently that’s also the name of a military robot.

EarthNight promotion has been going fine I guess. I’m a little burned out from doing shows. I’ve always been more interested in making the game polished and fun. Everything else, including promotion, is more Rich’s purview. Having said that, we will be at E3 this year.

EarthNight? A black girl with spirit magic and a non-white dude with a sword fight dragons as they fall from space. https://t.co/zzsRGNFlKj

BNP: Why is EarthNight important to you?

Paul D: I’ve played a lot of runners and platformers in my time, but I’ve been dissatisfied with most of them. They all feel kind of light. I get that they’re intended to be played in brief intervals, but that shouldn’t occlude them from being deep and engaging. In some ways, EarthNight is an attempt at making a game I’ve always wanted to play; one that is light-hearted and approachable, but also challenging and unpredictable.

BNP:What is it about this project that makes you proud to work on it and have your name attached to it?

Paul D: EarthNight represents a lot of firsts for me. I’ve never worked on anything this long (over 3 years), I’ve never worked on a team project this big, never done animation before, and I’ve never had to show unfinished work as much as I have with EarthNight. So I guess I’m pretty proud about not failing miserably at any of those things. Also, there are, like, 3 black female protagonists in video game history. BNP: What do you want people to take away from playing this game?

Paul D: I want people to examine their choices. An admittedly lofty goal for what is ostensibly a runner game, but I think we’ve come up with some great ideas to make it the most non-linear runner ever.

BNP: Lastly, I feel like you’ve done so much for a young artist as someone still in his twenties. What’s next for you? Care to share any hints at your next project?

Paul D: My next project is mostly sci-fi with a little fantasy, it stars a black girl, and I’m hoping to launch it this year 🙂 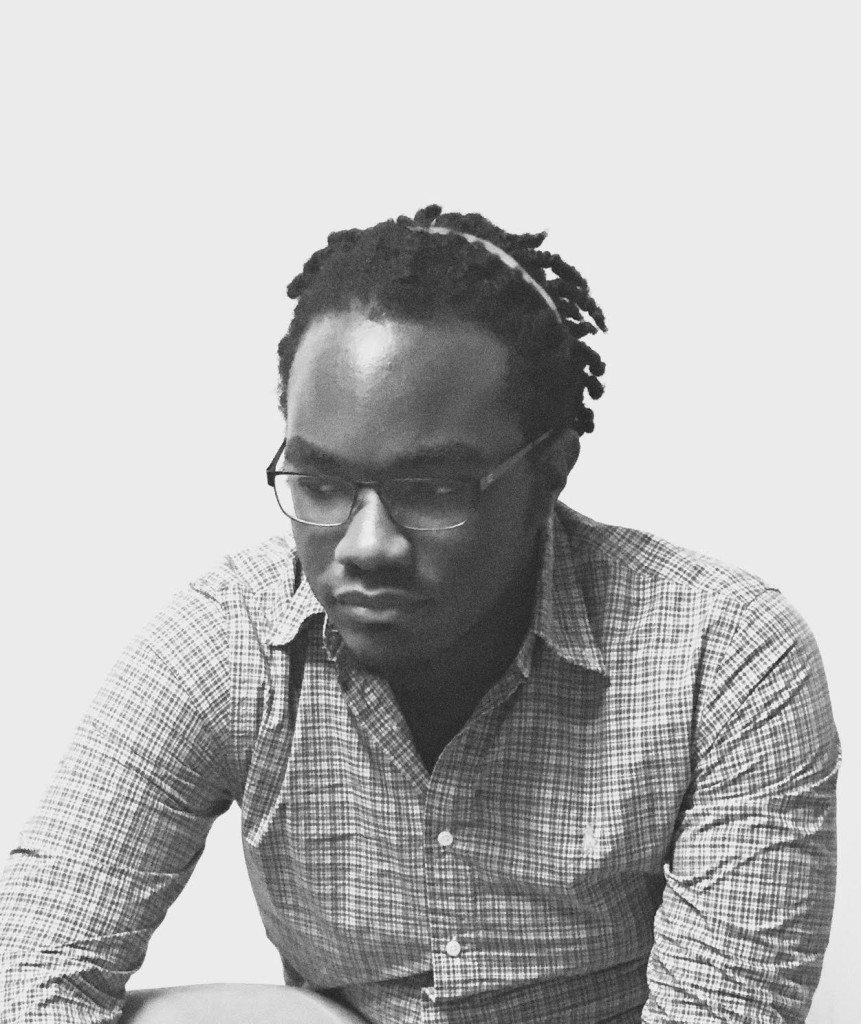 If you’re attending E3 this year, be sure to follow CleverSoft to catch updates and see what cool freebies the team may be giving out. See more of Paul’s art on his website, tumblr and Society6 store.