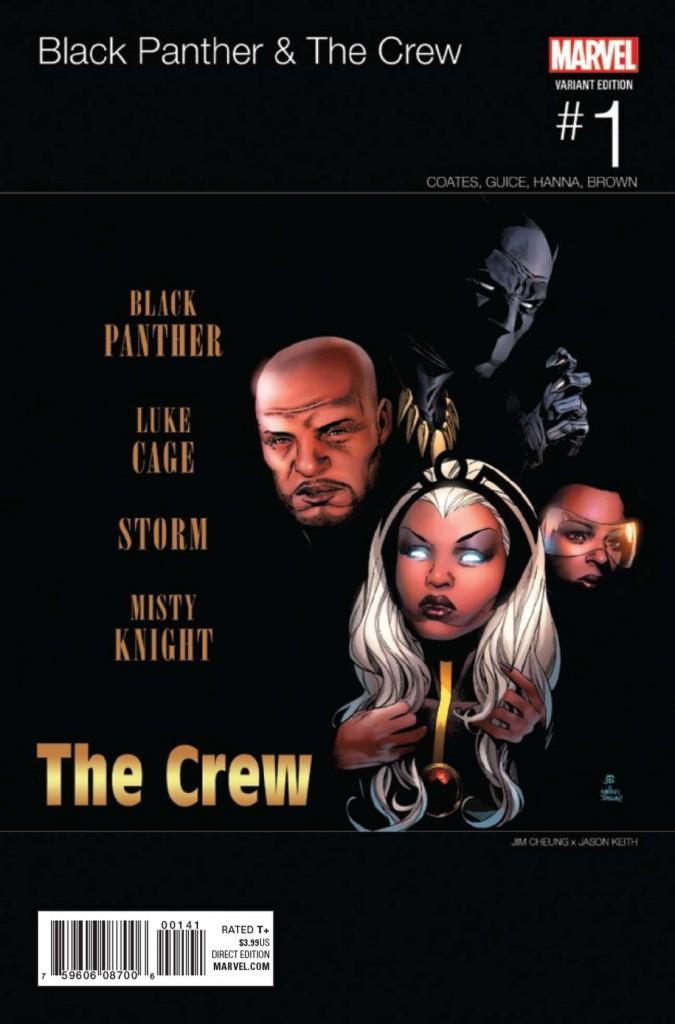 [quote_simple]”We don’t believe you ’cause we the people
Are still here in the rear, ayo, we don’t need you”- Q-Tip[/quote_simple]

I’ve been waiting for this series to return for fourteen years. Y’all ever waited that long for the universe to bring a fandom back for you? Do you understand what I’m talking about right now? I’m talking cult classics; I’m talking art that wasn’t appreciated in its prime. I’m talking about Christopher Priest’s original iteration of The Crew that gave us street-level heroes mixed with The Wire. Don’t talk to me about fandom unless you waited a decade and a half for your shit to come back around, b. We saw Coates pay homage with a new incarnation of The Crew in Black Panther and now he’s tag teamed with Yona Harvey to take this shit back to the stateside streets and give us a not only an homage of Easter eggs to the original Crew, but a brand new history lesson on crews we ain’t even know about.

We start off in the late 1950’s with Tommy Manfreidi employing the services of Ezra Keith in order to clear out Harlem. Ezra has a wrecking crew that was not only clearing out Harlem but other boroughs as well. From jump you can tell Ezra is straight up on some straight Gus Fring type of final boss battle shit. We see what each member of the squad can do and that Ezra, AKA Lynx, is the brains of his crew’s operation. From first meeting him you’d think this team is comprised of mercs or villains but that gets dead quick. Ezra’s squad is the golden era of street level heroes, they’re the Invaders/Crusaders of Harlem and other Harlems of America. They were straight up Black Ops about their shit too, as their dealings were shrouded in myth and legend.

I want to point out how genius this world building is on Harvey and Coates’ part, as we now have a golden era squad of Black heroes as an Invaders/Crusaders team in addition to The Black Captain America Isiah Bradley’s and Blue Marvel Adam Bradshear’s mythos as well. This building of Black heroes operating pre-Civil Rights era is my shit.

Now fast forward a few weeks prior to present day and we see that in his old age, Lynx, AKA Ezra Keith, kept up with activism and fighting the good fight. It isn’t until his funeral that people are able to connect Ezra to his Lynx alias. Ezra Keith died in his cell in police custody but the authorities are being funny with the details, autopsy, the private police force of the Americops patrolling the neighborhoods, even adding a curfew for citizens on top of that. I ain’t gotta tell y’all that Harlem ain’t about that shit at all and tensions are running high. Enter Misty Knight investigating the case and trying to get to the root of the facts. Misty discovers that Ororo Munroe (or “Blue” as she is being called up in these parts ) has ties to Ezra’s family, and the family requests her services in getting to the nitty-gritty of the shit involving their father’s death.

Misty Knight’s history as a detective comes into play heavy here. We see Knight able to shut other officers down with her reputation (on top of having Steve Rogers on speed dial) as well as how she just saw Ezra as a cop-hater. She isn’t calling foul play on dude’s death until she investigates further, and we get to see your girl doing that real rap raw detective work as she finds her answers. Misty’s trust in the law is understandable as she is (to quote The Wire) “natural police,” and as a reader and fellow Black person, I found myself reading this issue sayin’ aloud, “Come on, Misty!” As the story unfolds Harvey and Coates do a great job displaying Misty’s frustration for there actually being fuckshit involved in Ezra’s death. You know the pen game is impeccable when the writers got you talking at panels.

The best thing about this book is how street level the believability is. There’s elements of gentrification, abuse of authority, and you know police brutality appears up in this piece. Harvey and Coates do a great job keeping this all on street level even during the entry-level boss battle Storm and Misty find themselves in. Shout out to just having Storm and Misty at the forefront of this issue, walking and talking their shit with each other. Guice’s art does a great job setting the mood of each panel, from the protests, to Misty investigating the jail cell, to her walk with Storm. The action moved naturally and the look of the book feels very down to earth as well. There’s almost this hint of a modern noir interpretation of the art that is growing on me.

I’ve been fanboying for this new iteration of The Crew, and it came through with the quarterback sneak hitting us with references of Little Mogadishu from the original series, as well as the Americops prior to the ones Sam Wilson encounters. Harvey and Coates did their homework and not only did their own world building with new characters, but seamlessly incorporated unique happenings taking place in other series as well. We’re in for a compelling story with this one. We got a winner over here, guys. 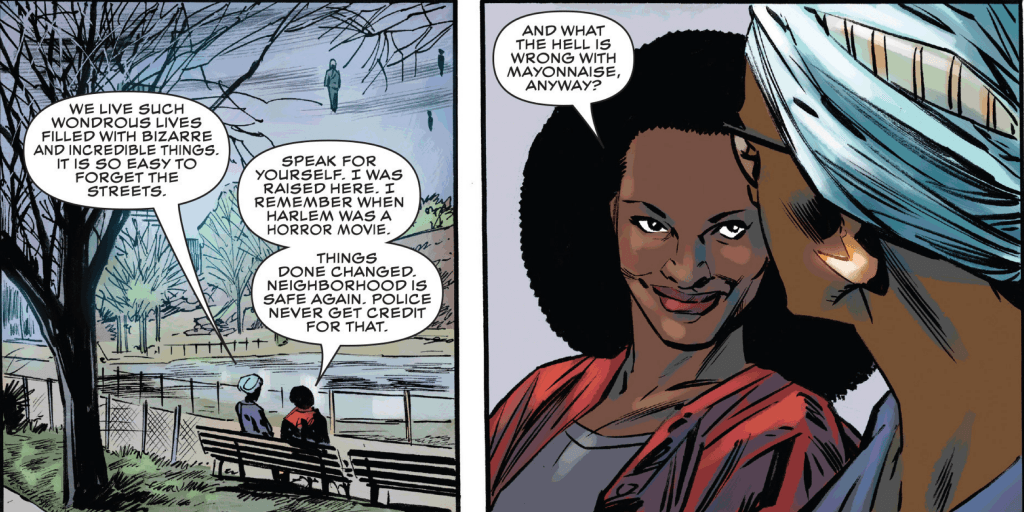 Also, it should be noted this is a story told with no money shots of Black pain spread across two pages or respectability politics at play. Would you look at that, it’s almost like that shit gets deaded when there are Black writers behind Black characters. Hmph, who would’ve thought?

9.7 Jars of Sriracha Mayonnaise out of 10