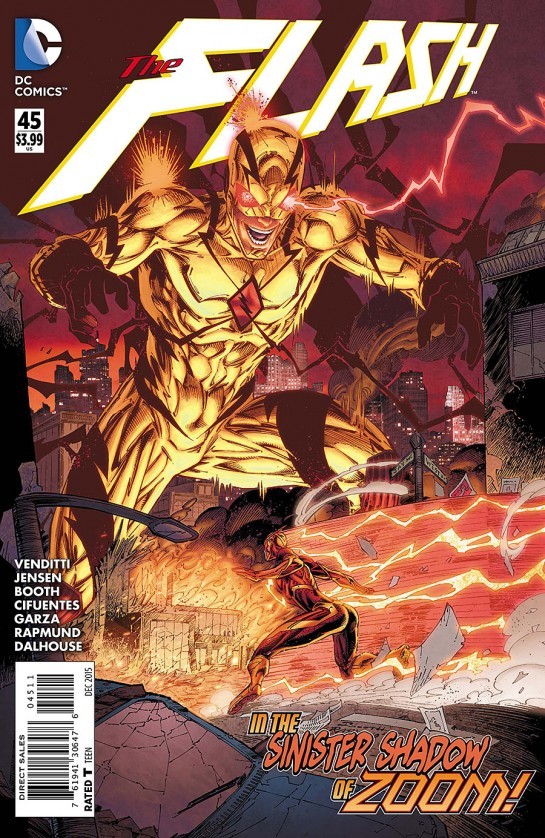 Issue #45 of The Flash focuses on multiple characters coming into their own. Professor Zoom’s true plans to rid the world of all other speedsters, past and present, are revealed, as well as Wally’s potential to be a hero and David Singh’s relationship with Hartley Rathaway, formerly known as the supervillain the Pied Piper.

Things pick up where they left off in issue #44. Flash is trapped in an impenetrable dome of solid air along with Wally West and the CC police department. The main catch is that the use of his super speed slowly charges up a bomb that will eventually destroy everything inside.

Barry’s story itself was the connector for a lot of other interesting, smaller stories in this issue. Sure, he has to save the day, but Wally’s natural heroism (and genius) is starting to reveal itself. Also, kudos for making it appear that David was afraid to reveal that he was with Hartley because he was afraid of people finding out he was dating a former super villain, not because he didn’t want people to know he was dating another man. He realizes that it shouldn’t matter and comes around in the end.

While nothing happened in this issue to make you jump out of your seat, it kept the plot going and you can see that plenty of interesting things are still left in this story arc before we move on to the next one. Barry’s still in way over his head with Professor Zoom and has to figure out how to even the odds somehow.