Okay, Omar’s sitting out this turn on the Flash recaps, so you’re all stuck with me this week. Deal with it. So, when we start this one off, it’s a new day as Joe West and Eddie Thawne have a busy night multitasking on the night beat with a little help from the Flash. Actually, to be fair, they had a lot of help from the Flash. I mean… basically he just stopped to drop off a perp and take a breather in their car. Anyway, it seems things are just a tad easier now that Joe and Barry have let Eddie in on the whole secret identity thing. For some reason. I’m sorry, guys, but I have to say Eddie Thawne is pretty lame in the Arrowverse. Honestly, name two awesome moments he’s had since this show started. Really… I’ll wait.

Anyway, while you’re thinking that over, back to the episode. So, Barry and Joe later find themselves at a crime scene where the people have been attacked by a swarm of killer bees. Shit like this makes Starling City look appealing in comparison to Central City. I grew up in the hood. I can deal with crime, but y’all got Barry out here fighting biblical plagues and shit. Cisco feels me. Right, Cisco?

Now, Barry’s a little gun shy about doing the usual “figure out what we’re dealing with in five minutes at Star Labs” thing in light of the fact that Harrison Wells is the Reverse Flash. Also, he’s not entirely sure that Cisco and Caitlin aren’t in on the whole thing considering that they’re nerds and nerds stan for Dr. Wells the way Twitter stans for One Direction. However, Joe reminds him that he’s a superhero, so he has to suck it up and be cool. After all, you don’t see Oliver Queen getting all twitchy when he rolls up on the Russian mob looking for favors like he owns the place.

Back at Star Labs, it’s business as usual until the gang gets a visit from the sundress GAWD, Felicity “I Woke Up Like This” Smoak (oh, yeah and Ray “Not Quite Iron Man” Palmer too). Yeah, folks… we have to spend another one of our weekly shows with this lame.

Teachable Moment: For those of you not up to date on current events, Ray debuted his new super suit, code-named Atom, on a recent episode of Arrow. In an attempt to bring Oliver to justice for a crime he didn’t commit, Ray got his ass handed to him by a guy whose primary weapon has been around since the stone age in somewhere close to 45 seconds. To put that in perspective, it took three Tomahawk helicopters to bring down Tony Stark in Iron Man 3. It took a dart to the hip and a kick in the nuts to beat the Atom.

His shareholders would have felt better if he’d blown all the R&D money on that billion dollar Wu-Tang album and a cocaine habit.

So, as it turns out, Tony… I mean, Ray’s super suit doesn’t work very well and he was hoping that the Star Labs gang could lend a hand in making some improvements and exchanging in awkward nerd banter. Barry is less than pleased about this because it’s putting more people in the line of fire being too close to Dr. Wells, whose intentions still aren’t completely clear to them. I’m sure it has nothing to do with Felicity being the one that got away and Ray being completely annoying. 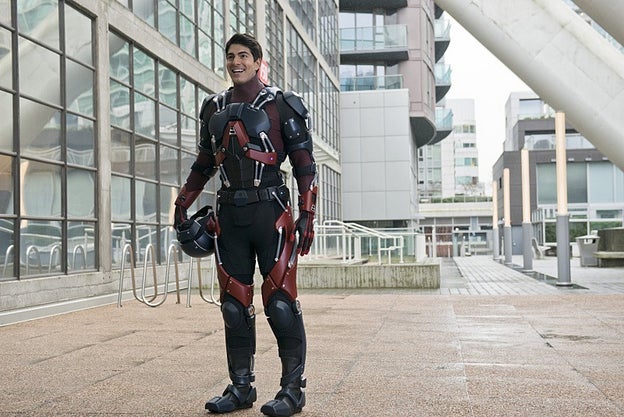 Meanwhile, Eddie’s not making Team Men-In-Iris’-Life look very good as a unit right now. He’s sworn to secrecy about Barry’s secret, but it turns out that he has the worst poker face in town. And given how cartoonishly obtuse Iris is when it comes to Barry being the Flash, that’s saying something. Iris knows her boyfriend, Captain Fauxhawk, is hiding something and she doesn’t appreciate it at all. Needless to say, things didn’t get any better for him during their impromptu evening out with Barry and Raylicity. (By the way, its gotta be weird for Barry hanging with the two women that “friend zoned” him and their pretty, not too bright boyfriends.) Iris didn’t even make it past the first entree before giving Eddie the blues about hiding shit from her. 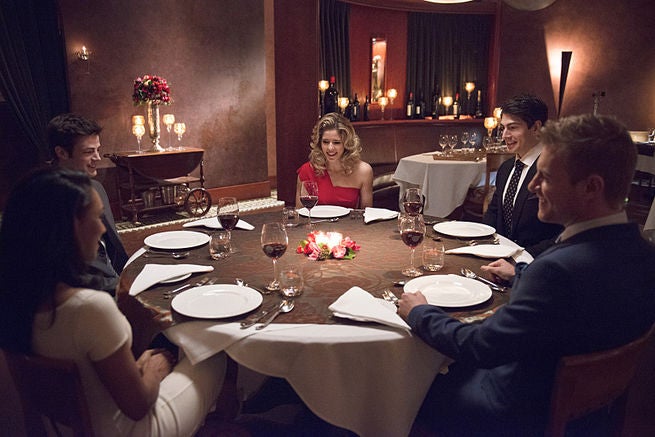 Sidenote: I have to say it. Iris’ anger about this is beginning to match my own. Joe’s whole keep Iris out of this thing made sense at first, but that was over a dozen episodes ago when literally the entire supporting cast didn’t know that Barry Allen was the Flash. Seriously, his father knows. His wrongfully imprisoned father who has seen him maybe three times since all this started knows he’s the Flash. Stevie Wonder could see that Barry Allen is the Flash and somehow this seems to evade crack reporter, Iris West, at every turn. C’mon son.

On the supervillain tip, it turns out the killer bee killer is Brie Larvan, a disgruntled employee from Mercury Labs who stole the technology during the iCloud leak along with those J Law nudes. When Barry and Dr. Wells reach out to Tina McGee to warn her the swarm is probably targeting her next, she met Harrison with that epic shade like, “If you protect me like you protected your legs, I’m not going to make it to season 2. I’ll take my chances on my own.” Well, eventually, she gets her wish when another attack from Brie becomes imminent. Team Flash sends Barry to find Brie, who is controlling these robot bees, and cut her off at the source while Ray suits up to protect Dr. McGee. Barry runs into another swarm of bees but Felicity manages to hack her way into the signal Brie is using to control them.

Ray figures out a way to shut the bees down by leading them into a body of water. And then his suit gives up. Again. For those of you keeping score, Ray Palmer new and improved super suit held out for exactly one fight. Against bees. He’d better watch his ass if the Candyman ever gets a sequel. Of course, there’s one remaining bee that hijacks its way onto Ray’s suit and tries to attack the triumphant, celebrating team when Cisco jumps in the way and takes the hit. Fortunately, before his heart stops completely, Barry figures out how to vibrate his hands to get enough static charge to use his suit’s built in defibrillator (I shit you not) and save Cisco’s life. Barry is left convinced by his friend’s sacrifice that he and Caitlin can be trusted after all.

After everything’s all over, Dr. McGee gives Joe and Barry a much deserved apology for not letting them help to begin with. She also reveals that she and Harrison Wells were once as tight as JD and Turk from Scrubs, but grew apart once his fiancee died; “almost as if he became a different man.” Later, Iris approaches Eddie after visiting Barry in his cell in the Friend Zone and getting some much needed advice about the dangers of Detective Thawne’s job. Of course, all that went in one ear and out the other with her (because I guess what happens in the Friend Zone stays in the Friend Zone) and she gives him an ultimatum: confess his big secret or say goodbye to Iris and the bizarrely sexy freakum dresses that she wears to work.

Finally, Barry brings Cisco and Caitlin to his crime lab at the police station to confess that he and Joe have been compiling evidence that Dr. Wells is the Reverse Flash. Cisco confesses he’s been having visions of Dr. Wells killing him in cold blood (which we saw happen in the “Out of Time” episode because time travel). Caitlin is like, “But that’s impossible. Harrison Wells is paralyzed.” Right, Caitlin, and allegedly, Suge Knight is 87.3% blind. He’ll be quadriplegic next week if his lawyer says it’ll help him beat that murder case. You believe him, too?