And you say awkward Iris date requests! And you say Reverse Flash da malnourished prisoner of the year! And you say Momma and Poppa Allen living a nice retired life! And you say NEW FRESH TO DEATH FLASH IN THE BUILDINGGGGG!!!!

Flashpoint is the story for season 3 and most people on this block don’t need no splainin bout that. Long story short, Flash went back in time to stop Rev. Flash from killing his moms and created an alternate timeline where errrrrythang is all jacked and out of wack.. but his mom is still alive though. Yup. Barry really being the hero we deserve.

Of course the first scene features the most anticipated Flash reveal of the season, with a new and particularly dark skinned young fellow taking up the cowl. His opponent is a man called Rival and they look a lot doper on screen than they were looking in the promo shots. Annnnddddd of course we finish up the new season intro with the Barry and Iris love connection 2K16. I can’t lie, it was kinda smooth tho.

Barry stops by his job at the CCPD, and doesn’t do much but remind us that he’s still a Forensic Scientist and that Captain Mendez is in the building! In the building and looking for Joe West. Barry comes up with an excuse weaker than an infant on the bench press, but convinced Cap to let him off work early so he can drop off a bag of Kennedy’s and toss up 2 giant middle fingers at Reverse Flash. Well, actually it was so that we could have the defining name of the season dropped on us all cute and shit.

Barry wakes up the next day hugging mom dukes tighter than a boa constrictor, has a nice breakfast with the fam, reveals he asked out the girl he’s been seeing at Jitters. They’re happy for him. They ask him to move out. Quick quick!

Ok, so Barry done tore up the timeline, again. His selfishness has had ramifications across the Flash-scape but none seem as depressing as Joe West.

Captain Mendez is as strung out as ever looking all over the place for Joe West when Barry flies over to his place to investigate and finds frat boy Joe West laid up like a bum. He flashes Joe out of his house into some spiffy duds, resting him on the wall in the elevator at the CCPD. He snaps his bender, wakes up, and stays to go HAM on Barry but before Joe could unleash a berserker barrage of more hate and insults, Iris comes strutting in looking like Cleopatra reincarnated. Joe realizes they’re about to go on a date and the roof of his skull nearly turns into a volcanic eruption. They skate, and while on their oddly familiar but oh so new stroll, Barry has some trippy flashback premonition. Just as he comes back to our stratosphere, CCPD tells them to get out of the area because New Flash and Rival are going at it. New Flash puts in a lil’ work then gets bodied and Flash saves him from dying..then goes in because he has some inkling that IT MIGHT BE WALLY FUCKING WEST lying in that dumpster!! What we all knew ages ago is finally revealed.

Barry makes up another one of the worst lies I’ve ever heard to get out of admitting how he knows who Wally is. THEN gets to become the interrogator and ask Wally how he got his powers. Wally tells Barry his story, a story that many people expected could be the way Speed Racer Wally gets powers. Windows tinted, rims shinin’, sittin’ high driving through the wrong damn thunderstorm, at the wrong damn time, getting hit with the right lightning bolt. Wally admits he needs help taking down Rival and the best option they have left on the table is to go see Cisco Ramon. But not before all agreeing that Wally is and will forever be stuck in the baby bro role and will be known as Kid Flash, much to his chagrin.

NOW LEMME STOP YOU RIGHT HERE. The next 3 minutes drops some of the funniest, most fire, grade A, rib shattering new personality intro scenes that The Flash has ever come up with. Richest man in America, Cisco Ramon comes thru on the illest corporate douchebag billionaire playboy pretentious asshole tip. He out here talking bout taking helicopters to work, tossing 20 million dollar offers at some small startup company like Floyd Mayweather tossin’ singles up in Magic City with Drake and 2 Chainz. Cisco acting wild fam. Being blatantly pompous, dropping dirty references to his Ivanka Trump in the face ass girlfriend, dismissing her after that gross AF ridiculously sloppy make-out session all up in front of everybody!! Shit was hilarious doe.

Andddd just like that, he’s telling the team they were told to never come back to Ramon Industries. Then 16 seconds later he gets selective amnesia and invites them into R.A.M.O.N Labs all the while spouting all the reasons he’s not going to help them. Homie one confused ass cat. But he does do us one solid when he drops our first original Earth (or what I’m calling OG Earth) easter eggs when he keeps it 100 with his reason for not wanting to help them. He doesn’t want a mothafuckin supersonic vibrating hand to be plunged into the depths of his extremely shallow heart. Good call back on that one writers.

Then Barry, being the sucker for manipulating others that he’s becoming, drops the helping out Cisco’s cousin in his biggest time of need story and really stuns Mr. Ramon on some heartfelt shit. BOOM another trippy memory brain attack.

Fed up with his half answers, Barry finally runs back to the Speed Jail to ask Reverse Flash WHAT’S REALLY GOOD. Turns out Barry’s memories are vanishing the more he uses his speed. Eventually he won’t even remember he’s the Flash and this world will become permanent. For some reason this is an excuse to go all out on taking down Rival, so he dons his suit and snatches up all the Team Flash pieces he’s set up on this timeline’s chess board, reveals his identity and tells them everything. They need a few extra seconds to get the whole Flashpoint angle, but a quick little jump into the season 1 and 2 past does the trick, as Barry officially dons the Harrison Wells trope by picking up the white marker and fuckin up some commas on the glass board. He offers up his crime fighting services then snatches up Caitlin from her optomologist gig, because clearly fuck her job and we needed the whole gang back together in order to figure out a way to find and stop Rival.

Iris keeps it real with our boy as we cue the CW Sawft violin and piano music!!

Iris: I believe you Barry boo boo. I love everything about my life, except for one thing I haven’t been able to put my fine ass finger on. That thing went away the moment I met you, Barry. What were we on your Earth?
Barry:

Iris: No matter what you did or didn’t call it, I know this is what love feels like.
Barry: You right..

Of course we get into full on Mt. Olympus Greek Gods vs The Titans, Super Saiyan turnt levels of ass kickin’ when Caitlin come flying into the screen deep from left field with a suggestion to modify all speed cameras in the city (with the help of Cisco) to measure near sonic velocities so they can locate Rival. Plan was fuckin flawless as Flash and Kid Flash skip on down to Prescott Sawmill to do battle with this Tick-Zoom hybrid. 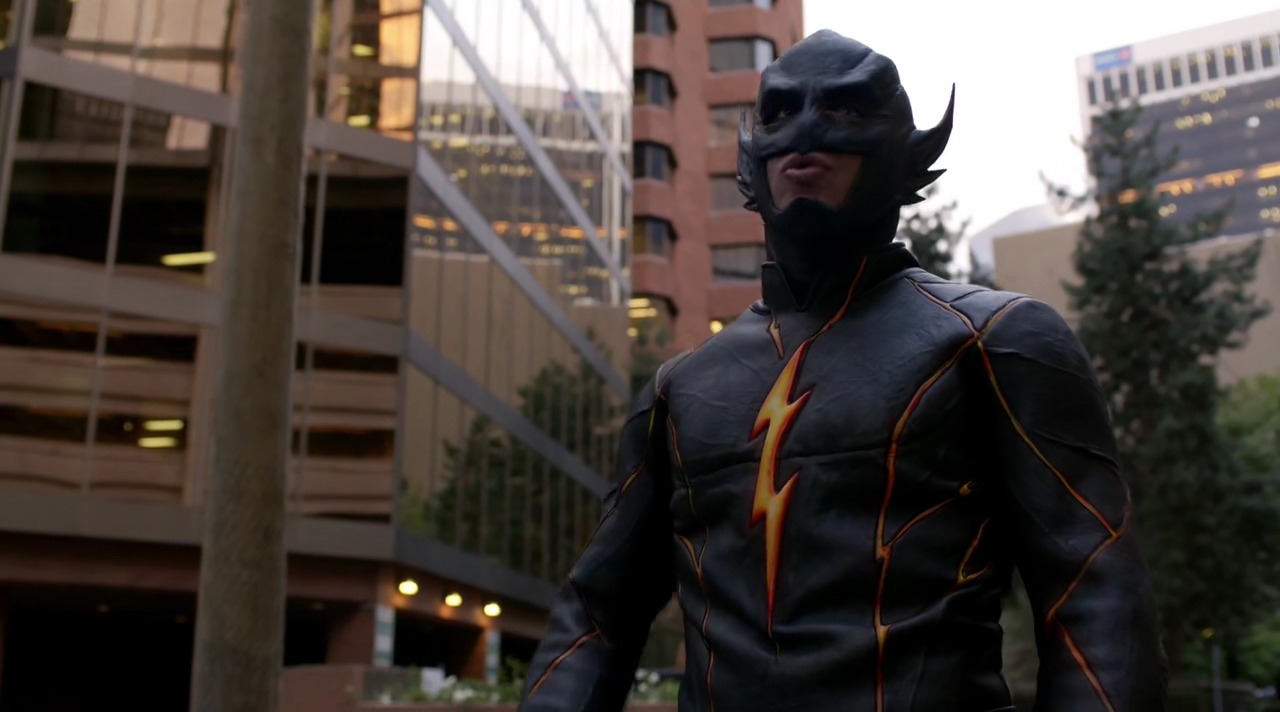 Both Flashs engage in a horrible conversation about flanking. I think there must be a joke or metaphor to be made in there but I’m too through shitting on Millenials for not knowing how to appreciate the ways we once did things. Anyway Rival shows he ain’t no shook one by taking off his mask and announcing his name, Edward Clarence, then the battle pops off when Kid Flash ignores the plan and rushes in because he knows he “can take this guy”. Yea, that’s what you thought Kid Flash, that’s what you thought! You thought that all the way up to the moment when you got a metal rod javelined through your body son!!

Nah, but on some real shit, da homie Kid Flash took a jagged pole thru his vital organs and Flash responds by getting that ass handed to him when he tried to put Rival in his place. And what does it take to get Flash to dig deep inside his flashy speed force awesomeness? Who’s seductive, sultry, serenading voice washes over Flash and gives him the strength and testicular fortitude to rise above this chump in an evil black Flash suit?? None other than the future Mrs. Allen, Iris ‘I met you like 2 days ago but feel eternally connected to your dopeness and know exactly what to do and say in these dire situations’ West! Barry turns on the afterburners and delivers the knockout 2 piece combo with biscuits and gravy to take the victory and serve up Rival a fatter L than Snoop Lion ever seen. The bad guy is taken down and Barry finally comes to his senses and tells the team that he has to right his selfish wrongs and correct the bizarro timeline. He goes to visit his parents and weirds them the hell out when he says he just wanted to see them one last time. Iris helps him stumble his way back to Speed Prison and gets Reverse Flash to bring him back to OG Earth…butttt not before making Barry say, in his own quivering words, that he needs Rev. Flash to kill his mother.

Some Antarctic levels of cold shit right there. Barry does what he has to and Reverse Flash props our boy up and zips them back to the night Barry’s mother was murdered. This time he allows the most tragic moment of his life happen and everything goes back to normal…yeah, normal.

[quote_box author=”” profession=””]Late Episode Shockers[/quote_box]
[divider type=”space_thin”]
Rev. Flash drops Barry off at home like a neighbor dropping off your 9 year old son. He done returned to OG Earth and decides to give Boa hugs and have drinks with Wally and Joe, in honor of Henry ‘Da Fallen Angel’ Allen cuz we cant forget that the 2nd greatest dad on television went RIPs at the diabolical hands of Zoom last season. Everything was all good until Barry asks where Iris is. Such a simple question. Such a normal thing to ask..until you enter the wrong timeline.

Soooo Iris no longer has a relationship with her father? For the whole upcoming season? Is Barry gonna come along on his white savior flow and mend their downtrodden relationship? Naaaaa that’s too much for me to handle. I’m out. This premiere was dope. Lot’s of moving parts in this Flashpoint story.

Turns out there’s gotta be an Edward Clarence on OG Earth because a man that looks awfully like him is being called by some demonic voice to scratch the name of and most likely become this season’s villain, Alchemy. I like that.