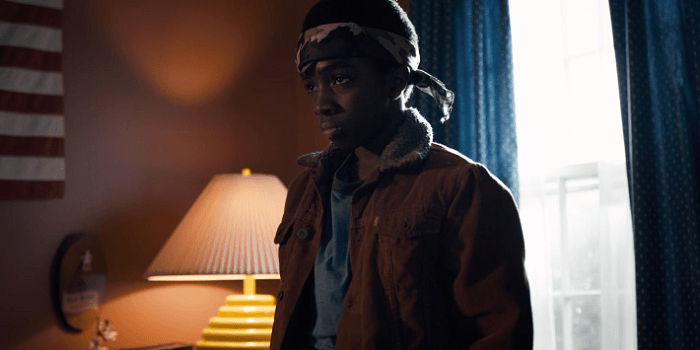 109 Shares
*Some spoilers for the Netflix show Stranger Things*

Let me be clear about something up front: if you coming for Lucas on some BS, then you coming for me. I ride out for Lucas like Monster when he got in the 6-4 with Doughboy looking for Ricky’s killers. I got Lucas’ back like he know where I hid the body at, fam. Lucas too mean for y’all? Oh word? Dude is the only Black person under the age of 35 in the whole gotdamn town. He is the voice of reason among his White friends, the friends that don’t listen to him ever, the friends that go off and do irresponsible shit that Lucas gets dragged into. Yeah… Lucas is mad and he’s earned the right, yo.

So while I ride for Lucas on gawd levels of loyalty, even the unbiased can see that your boy is also the most versatile of the crew. Gathering Intel, navigator or warrior, Lucas could do it all, fam. If Stranger Things partnered with Mattel (and they absolutely, fucking should) and gave us some action figures, I got some suggestions for the different iterations they should cook up for Lucas Da Gawd Sinclair.

This is basically the prequel to Samuel L Jackson, people. Lucas just a regular role playing, questionable language using dude, always on the offensive and much rather hit the Demogorgan with the hot shit than cast a protection spell.

Lucas looks laid back in this state, but he always seems on the verge of saying, “If you don’t fireball this muthafucka maaaaaaan…”

Action: Fully moving upper body with hands that stay parallel to each other as they move for emphasis.

Right around the time Lucas was fed up with White folks but simultaneously wanted to get some answers for himself, ya dude jumped on his quicksilver bike and made his way out to the Facility where the real shit be going down. Your boy rode his bike through the woods and up to a fence that looks like some shit they construct around San Quentin. Lucas staked that shit out until he saw the ambush was coming so he could alert his peoples and get them out of there before the wet work team caught up with them. Accessories: Camouflage bandana, red coat with the faux fur on the collar, blue Jansport backpack (which includes binoculars) and banana seat Huffy bike with the light on the front.
(Sniper Rifle optional)

Action: working wheels and led light on bike so that Lucas can simulate the recon work.

Fam, when Lucas pulled out the artillery and had that look in his eye like, OH, Y’ALL TRYING TO GO TO WAR? OK, I’LL TAKE YOU MONSTERS TO WAR in his eyes? Sheeeiitt. Your boy was ready to put numbers on the board. Your boy out here packing straight up Geneva convention violations into his backpack. Tiny Rambo Lucas ain’t nothin’ to fuck with.

Action: Quick wrist action that allows you to hit a monster in the eye with a wrist rocket on the quick scope.

We’ll probably never get this, but the fan fiction I’ve written about Stranger Things has a time jump where the facility finally explodes and takes most of the state of Indiana with it. After 82% of the population has been wiped out and the toxins kept the government out of the state for years, some of those that were left had to learn a different type of survival. At age 29, years after Lucas was blinded by the explosion, he has honed his survival skills and evolved the remaining senses so that he can still deal with the scavengers and canibals in brutal, blade wielding fashion.

Accessories: Straight up Book of Eli look. Long brown trench cloak with homemade pockets for supplies, a sawed off shotgun, a handmade machete with waist sheath, sunglasses and a long scarf/head wrap combo to keep the dust off his face.

Any other badass action figures you can think of for Lucas. Or, dare I say, action figures for 11. Cuz that would be lit. Leave some of your suggestions in the comments.