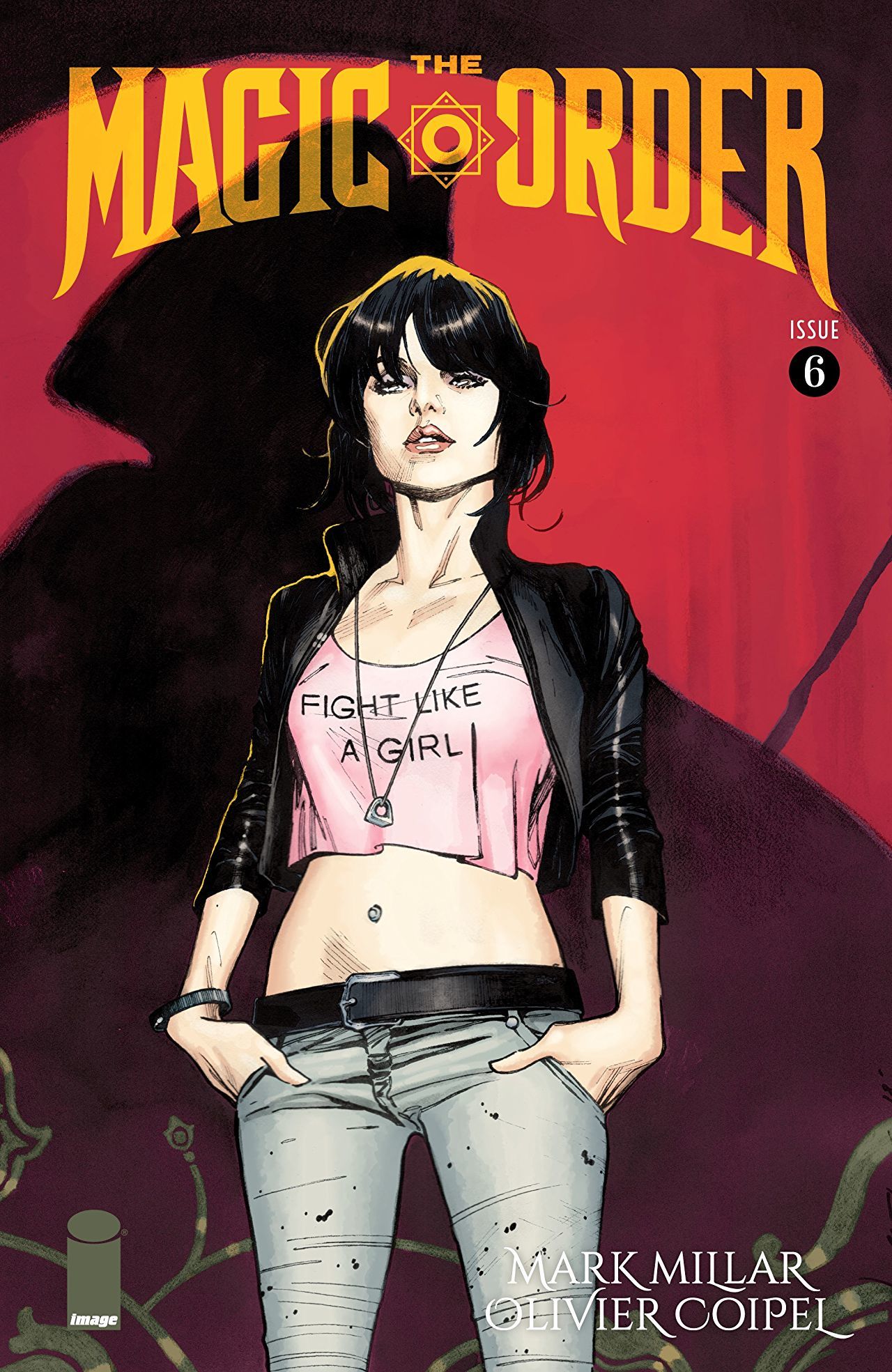 *Light Spoilers Be Turning Egypt Into a Desert*

The finale to this highly anticipated Mark Millar creation has arrived, sliced through expectations and wrapped up an excellent introduction to the world of The Magic Order. Not only does this story finish with an immensely satisfying ending, but the tragic demise of daughter Rosetta is finally revealed in full, agonizing detail. Gabriel’s heel turn was a jaw dropping turn of events, so we needed a complete picture of his descent into the evil clutches of Madame Albany. He’s turned on everyone in The Order, and Cordelia is the last hurdle before he can seal his deal with the devil in black. 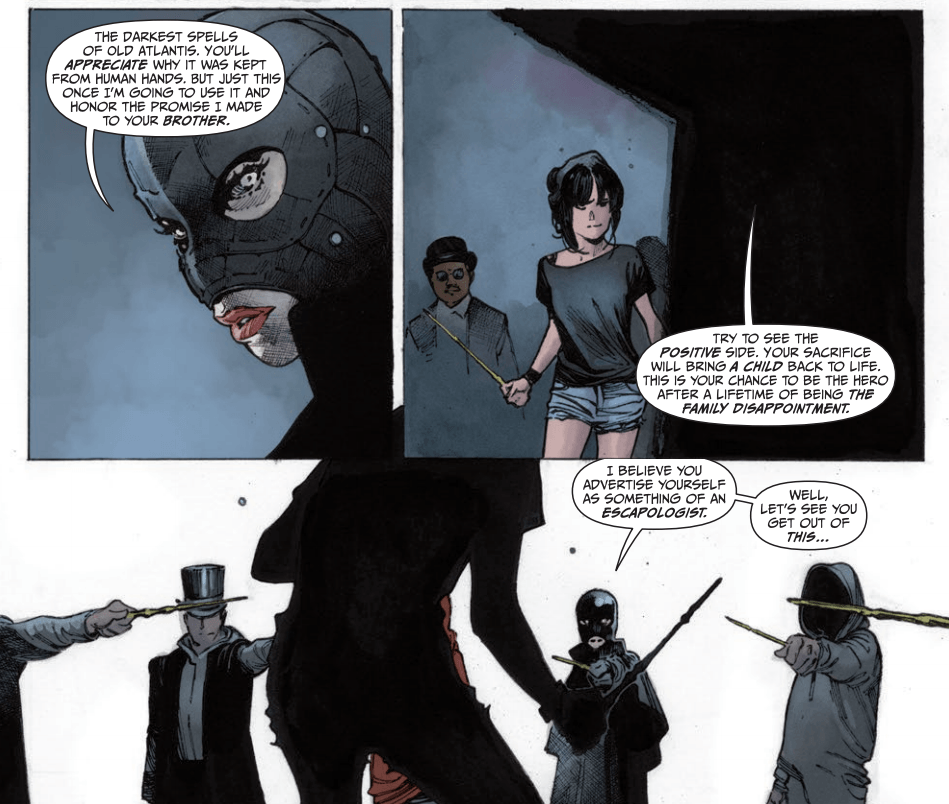 Gabriel has been masquerading around as The Venetian, murdering his family members in elaborate fashion. Albany has promised him Rosetta back from the dead, his sole wish in the world. The Madame and her magical murderers have Cordelia surrounded, wands raised, but Mark Millar has a soft spot for a good heroine redemption story. Little do they know, Cordelia has been waiting for her moment to own the family fuck up label and use it to her advantage. I’m talkin bout a retribution flex that leaves our villains reeling! But is one Moonstone enough to take on the most powerful wizard alive, driven by grief and accompanied by sadistic slayers of various sociopathic levels?

Meanwhile, the other side of Madame Albany’s grand plan is to have her shape shifting scoundrel Lord Cornwall retrieve the mighty Orichalcum from Moonstone Castle. Bast bless Millar’s kind heart, for he saw it fit to bless us with one of the most savage and unexpected unveilings. 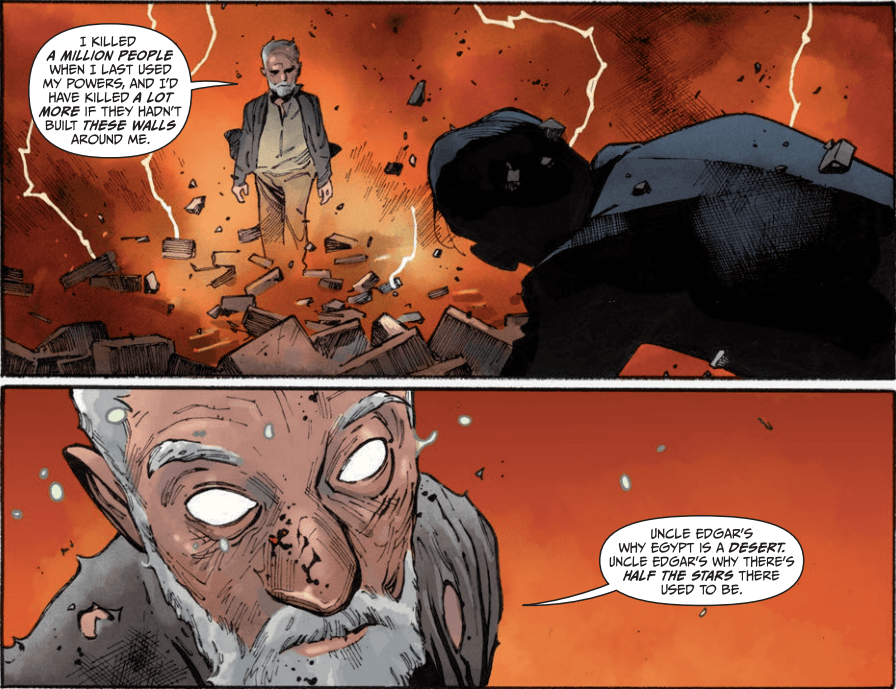 Uncle Edgar was an afterthought for me. I didn’t feel compelled to get to the bottom of his whole confined to the castle situation, but my Goddess was I hype when I saw that man basically go Super Saiyan on Cornwall’s overconfident ass! Homeboy was spittin straight bars while defending his home and the book containing the darkest spells in history. And Coipel has him looking so good while doing it.

Mannnnn, all of this dope action, and I haven’t even gotten to Olivier Coipel’s phenomenal job on the artwork. Him and Dave Stewart combine to score big in this finale. When there are so many awe inspiring moments of mayhem and destruction deserved of praise, I like to highlight the subtle panels that wow. The first example popped out to me early in the issue, as Cordelia reveals her trump card. Madame Albany blurts out an absolutely stunned, “Oh no,” and Cordelia responds with a sly, “Oh YES” that was so minimal, yet so powerful. The panel features nothing but Cordelia’s vibrant red lips replying with a wry, confident smile that made for a phenomenal tone setter.

Coipel lends his epic pen to the Moonstone battle as they rip LA to shreds, sending stars flying up and down the Hollywood walk of fame. And as nice as it would’ve been to get this story of betrayal and revenge wrapped up with a cute Cordelia victory, Mark Millar does not place bows atop the final chapters of his sagas. No, it was another tragic ending that gave me wild Jupiter’s Legacy vibes. By the end it’s time to head back to where this all began; a funeral. The snap of a wand is the true mark of an ending in The Magic Order, and Coipel’s rendering of this scene is enough to send shivers down your spine.

Mark Millar and Olivier Coipel have churned out a brilliant first volume of The Magic Order. From start to finish, this title has been a stellar ride of mystical exploration, villainous exploitation, and heroic vindication. The hundreds of years old foundation has been laid so that this comic can (hopefully) live on in the hands of future artists who also possess impeccable attention to detail. Millar’s first comic run after Netflix acquired Millarworld is a bonafide hit, and I’m fully expecting an adaptation in the next 5 years. For the time being, I’ll be back to re-read this harrowing tale of wizards and bloodshed as often as possible because it’s just that good.

Reading The Magic Order? Check out BNP’s other reviews here.