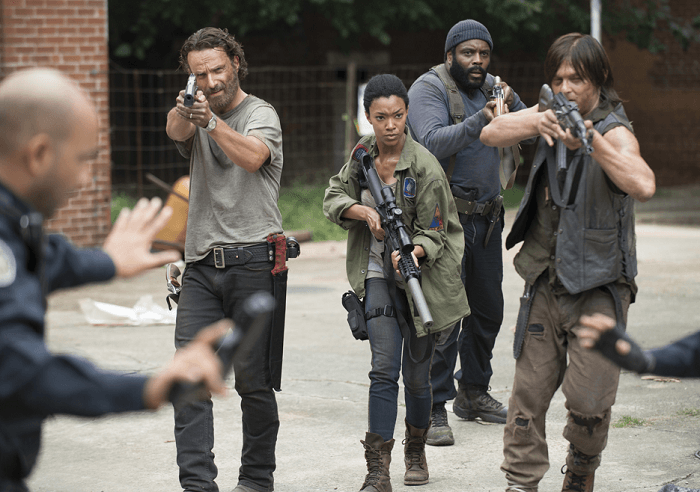 To be honest, this column started off being titled “Dr. TV Snob: Or How I Learned to Stop Hand-wringing and Learned to Love the Walkers” or “How The Walking Dead Got It’s Staggered, Growl and Bite Back.” But I can forgo some of that pretentious garble and just state that while I still don’t have it among my top shows on TV (the finale left much to be desired), The Walking Dead is back to being a “good” show for me. Or at least one where it doesn’t get pushed to “when I’m bored and have an hour to spare on Wednesday night, I guess I’ll watch it from my DVR” status. I say this with some trepidation as The Walking Dead in recent years has been much better in the first half of the season then it has been in the second, so it could be history repeating itself. But I’m willing to remain optimistic that showrunner #4 has figured out how to make this a sustainable show that won’t make me roll my eyes hard enough to put me to sleep any more.

So who gets the praise outside of the production and casting staffs? Well, we actually had some strong character portrayals this season, so I guess that’s a good place to land. Remember, this is just for the first 8 episodes of season 5, not the entire series.


***Spoilers if you haven’t seen the midseason Finale.***

Yes, a newcomer cracks the top five in a surprisingly shallow MVP field from this first half of the season. Michonne, Daryl, Glenn and Maggie all spent a lot of time on the bench this season and not having large impacts on the story. Noah put the plan in motion for his (successful) and Beth’s (attempted) escape from the hospital, shook down the New Gawds (Carol and Daryl) for their weapons and was part of the assault plan on the hospital for the prisoner exchange.

He was even willing to submit back to Antebellum Hospital to avoid bloodshed until Beth stoop up for the protest (more on that later).

Big Red got to be more than just a caricature this season so far as he leads the “we all knew that shit wasn’t gonna end well” expedition towards DC. For the record, these cats didn’t even make it out of Georgia, did they? Anyways, the Sargent gets points for being singularly focused, willing to sacrifice himself for what he thought was the greater good and ultimately having the best two piece and a biscuit combo in the post apocalyptic world.

Learning about the fate of his family, especially about how they chose a gruesome death over his brutal protection helped humanize him and make more sense of why he so desperately needed another mission to accomplish.

I know fam, how could I? Karaoke Beth has been one of the most annoying characters on the show ever since Lori told Rick that Shane needed to be killed because he was too dangerous, then gave Rick the silent treatment for half a season because he killed Shane. And yes, her focused episode was one of the weaker ones of the half season. The reality is, Beth was Agent Zero in the hospital: working behind the scenes to undermine the power structure, using a zombie as an ambush to avoid a sexual assault, going first person shooter in the basement with Noah, keeping Carol alive and of course her ultimate sacrifice when she hit Dawn with the Oz shank during the exchange to save Noah. Again. Beth’s last act of defiance towards Dawn and the rest of the hospital survivors was #BlackLivesMatter. An honorable death indeed.

Perfect Dark Carol has had the best and most consistent story arc since the show began. The once battered wife and passive mother is now Lara Croft’s cool aunt that used to take her out on expeditions when her parents didn’t know. The characterization of Carol is not only best on the show right now, but surprisingly, the actress Melissa McBride has been pretty damn good in showing a good arc as well. For this list, she might have peaked too early though, as her single-handedly leading the prison break was followed by a seatbelt and white privilige protecting her from a fall off an overpass and getting “Meet Joe Blacked” before becoming a prisoner of the Hospital.

Here’s the deal, this show is at its best when Rick is in full, “my last fucks were given when my wife gave birth to mine or my former best friends daughter and bled out on the floor before my son had to put a bullet in her brain” mode. Rick led the boys away from the slaughter room, gunned down about 5 Terminus folks in the street, led the rest of the party out and then wanted to go back into Walker Heaven and finish the job.

The “we didn’t want to waste the bullets” line before beating Gareth to death might be the most chilling shit we’ve seen Rick deliver. And we’ve seen dude rip someone’s throat out with his teeth before. And also, for the record, Rick gave Sgt. Bob Lamson a chance to surrender himself before he Grand Theft Auto-ed your boy in the Finale. A pissed off Rick that isn’t haunted by morality anymore is the best Rick. Lets hope that keeps up after the break.

Do you have a different Top 5 for this season? Let us know in the comments.