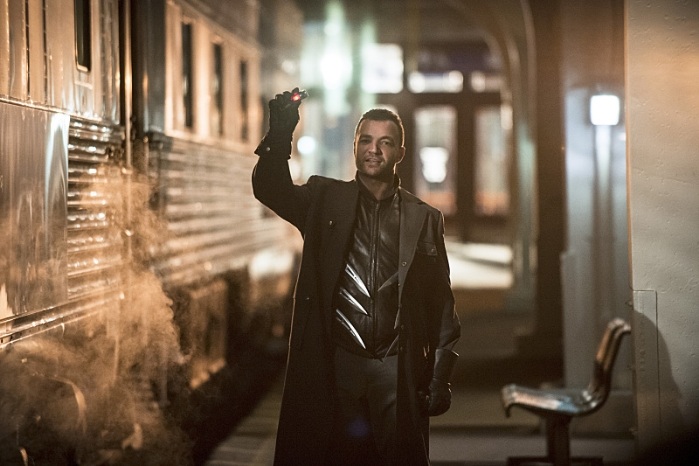 We back up in Starling City this episode. Ollie and Roy out in the dead of the night repping their hoods, scope’n their Boomerang Killer’s hide out. Now I said last week that the Mayor would need to put a law in play to get these Paleolithic era weapons on the streets under control cause he saw a house get hit up with arrows in a drive by. Shit outtta hand. Ollie and Roy out here doing another drive by this week as they go Modern Warfare on their perps safe house. The used explosive arrows to kick in the door waving their bows like they waving the four-four.

Their dude ain’t inside tho but Argus shows up to the party late as fuck. Some soldier not knowing his ass is just an extra in Ollie’s life telling him to drop the case. That this is their jurisdiction. Roy said, “You ain’t finna drop shit are you?”. Ollie looked at him sayin, “Just these arrows b… just these arrows”. Meanwhile Caitlin and Cisco arrive at Felicity’s work to get the DNA sample from Sarah’s murder in person because they got time off, they wanna help and cause…um..well..

Ollie comes back to the cave seeing Cisco touching shit, Caitlin and Felicity comparing fan fic. He already done with all of this. He tells Diggle Argus messing up then dropping them jabs on Lyla making Diggle have to play middle man and get some info form his “it’s complicated” Lyla. Diggle is at Argus hitting her with the “baby please” R&B face. She tells him the dude slanging them Boomerangs is Digger Harkness. He was Suicide Squad and he may be holding a grudge on her cause she tried to detonate the bomb in his head. Other than that it was just a typical day at Argus. Digger shows up on cue gunning for Lyla. He took out mad dudes with his Boomerangs. I don’t know what kinda physical fitness test Argus employees go through but me personally? I’m not having “Death by Boomerang” anywhere on my autopsy. Even as an extra on the show I wouldn’t be able to go out by a boomerang. Nope, not me.

Diggle calls in Ollie & Roy for that back up. Roy came in thinking, “Boomerangs? Man listen, I’ma put the arrows on– aaaaaand he knocked my bow out my hands. Lemme pull out these escrima sticks and beat his ass up close for that”. Digger was straight up man handling both Ollie and Roy with nothing but hand to hand combat. He then chucked them rangs at Ollie (and when I say rangs I ain’t talking NBA Championships memorabilia or engagement celebrations, I’m talking them Boomerangs). Ollie was dead to rights until Barry Allen decided he was ready press start on this team up.

Digger sees a dude moving at Mach 1 and says, “I’m good” throws a smoke bomb and literally walks out. Like literally walks away. Making me wonder, could Barry not just run around to find this guy cause Diggger is also Australia’s Hide & Seek champ since 1976? Anyhow, Barry beats Ollie to his hide out real fast just to break his high score on the salmon ladder.

This guy Barry is hilarious man, he can’t even sit still for five minutes. He goes to get sushi and arrives after Ollie, Diggle and Lyla are in the cave. Lyla lookin at him like, “who the fuck is this and why is he moving faster than my internet which I just upgraded?” Caitlin telling Barry to at least fucking pretend he got a secret identity. Barry is all, “It’s cool it’s cool”.

Ollie tries to tell Barry that things operate a bit different in Starling City but Barry is persistent in another team up. They rebuild Digger’s Boomerangs and find the maker. Barry gets an up close look at how Ollie operates as he put the arrows to their lead. Ollie goes straight up interrogation mode making Barry think he is in the middle of Batman Begins.

Barry: Yooooo chill! He said he doesn’t know where Digger is
Arrow: HE IS LYING!
Lead: I swear to god I don’t know man
Arrow:

After getting a phone that they are going to try to trace back to Digger. afterwards Barry hits Ollie like, “Man what the fuck was that all about? This ain’t Gotham. You can’t be torturing leads b, you supposed to be a hero”. Ollie hits Barry with that gut check EARLY!

“Gotham? This hero just say Gotham? This ain’t Gotham? Mutha fucka, have you seen Gotham latley? That show sucks. This is Starling City baby. Not soft ass Central City. I said this right here? Star. Mother Fucking. City. This is as close to Gotham as you’ll ever get. This is straight up in the dirt grimy, this is Taj recapping The Walking Dead talkin bout the MVP “RICK GRIMES BUSTIN HOLLOWS IN THE HOUSE OF THE LORT” GRIMY. We in the muck right now, lemme tell you bout my hood, lemme tell you bout where the fuck I live–“

Back at the “Arrow Cave” Lyla and Ollie bonding over having to do extreme measures to protect the world… but basically talking that shit as they watch Barry mope in the corner on his lonesome.

Lyla: Look at this pouty ass hero over here.
Ollie: I know right… (laughin) You ever seen “Don’t be a Menace–
Lyla: To South central while drinking your juice in the hood?” Yeah
Ollie: His name is Barry…
Lyla: and if he can’t hang…
Both: He’s got to get out the gang (what) get out the gang!

Felicity gets a hit off Digger’s location from the phone, all the boys head out. Cisco Roy and Diggle talk about the differences in the severity their heroes opposing villains posses. They arrive on the scene and figure out it was a ruse. Digger used the phone to bounce back off the signal felicity used to find him an….. man, its some fucking tech nerd shit explanation but basically dude hit *69 on Team Arrow and got their location. Digger showed up SLANGING DEM RANGS (boomerangs) and bad “comes back around” puns.

He HAAAAAWKED Lylya in the chest with a boomerang then bounced when Felicity dropped a grenade on his ass. The team gets back and has Barry rush Lyla to the nearest hospital.

Ollie is thinking this is all his fault. Had he not gotten the phone all this woulda been avoided and that would brought the count of people that know where his hide out is down to 48. Barry hits him with the “it ain’t your fault” Goodwill Hunting scene (even though we know it is his fault but whatevers). Felicity gets a location on Digger whose ass is about to leave town at a train station. Barry clears out all the civilians so Ollie can have the entire station free to mollywhop Digger’s ass.

Digger knew he might get caught so he did like Saturday morning cartoon villains taught him and placed 5 bombs all around the city. Flash is on that,he figures out he gets the whole team to each bomb’s location to defuse them at the same time. Which means it’s time for Ollie to get that revenge served up 32 degrees below the no chill.

Diggle decides to stop the “we’re not married” running joke with Lyla and get the marriage on again. Barry and Ollie tell the team that Digger is now sharing a cell with Slade Wilson on Lian Yu.

Barry earns a place to hang his suit in the Arrow Cave (why isn’t it called the quiver) whenever he is in town but before they say their good byes Ollie wants to pull an Apollo Creed and do an unsanctioned match just to see who would really win in a fight.

Now for a new segment I’ve added to Arrow recaps.

Round of applause for Ollie for snatching this week’s unnecessary parkour move in fight. A bit of dated move but Ollie actually made it 34% necessary in this fight. Let’s take another look at that in the highlight reel

Good job Ollie but you’re going to need more than that to catch up to the current king of the hill’s portfolio.