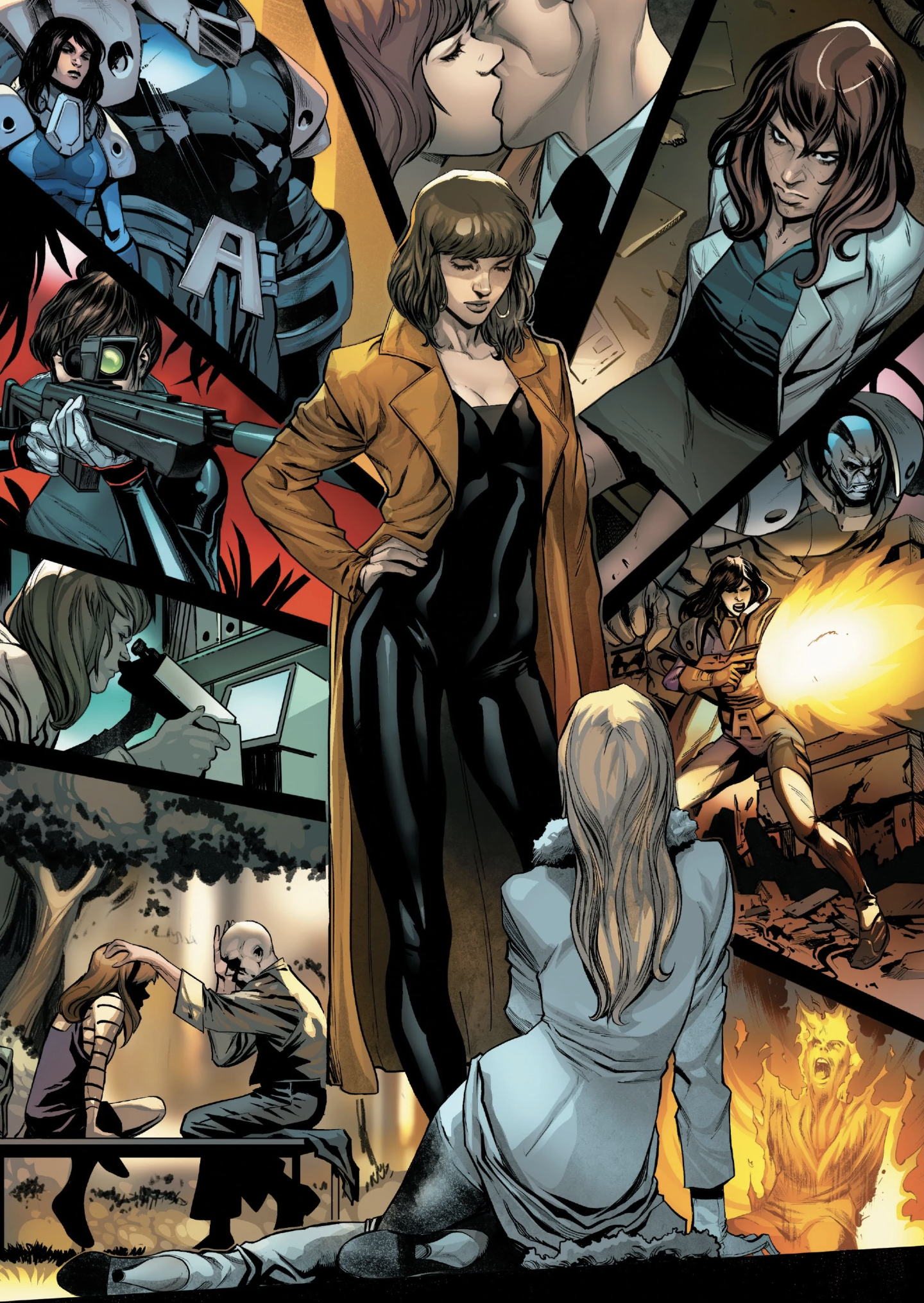 X Deaths of Wolverine has come to an end, and Moira McTaggart’s future is now cemented in vengeance and villainy. Good for us readers, bad for Moira, and it’s really grimy how it all went down. Charles, Erik, and Moira are Krakoa’s 3 Legendary Sannin turned Illuminati. They pulled the strings behind the scenes like Kankurō and created a paradise.

It was that fateful park bench meeting of Charles and Moira that set mutants on this path to an island nation in the Pacific. It was Moira’s ability to resurrect herself in a restarted timeline over and over that allowed Charles to overcome 70 years of failed dreams. It was their partnership with Magneto that allowed former X-Men ops to live in peace and harmony on Krakoa. And it was ultimately, the trio’s decision to deny the resurrection of all precogs that led to the unfortunate turn to the dark side for terminator Sith Moira.

But let’s backtrack real quick for those who are unfamiliar with this tale or need a quick refresher. Everything was going so well. Moira was chilling in her little “no place bubble” where psychics could not detect her and ordinary mutants couldn’t reach her. Charles and Magneto were the only ones in the know, leaving the master of magnetism and the godfather of the X-Men to create a nation of mutants devoid of human hate and persecution.

It was All Good Just a Week Ago

And then Mystique had an epiphany. These motherfuckers have suspiciously avoided adding the love of my life to the resurrection queues.

These motherfuckers have sent me on missions that were nigh impossible with the stipulation that I must succeed in order to have my wife brought back. These motherfuckers are screwing me over, and I shall not have it! Mystique finally took action into her own hands and finessed the shit out of everyone involved in the running of this society and decision making process of bringing certain mutants back to life. She used her shapeshifting abilities to bring Destiny back and once she was in the mix, all bets were off.

While it was clearly a group decision to leave precogs off the rez queue, Moira became the scapegoat. Mystique came for that woman with every ounce of pain and suffering chakra she was storing up. This was becoming the forbidden love story that neither Charles, Erik, or Moira could handle and it all came to a head when Mystique played her trump card and dealt the final blow to the woman who, up until that point, dedicated her whole life to helping mutants win the simultaneous wars being waged against them by man, machine, and more.

Moira was the fucking messiah, and I don’t say that shit lightly. She has literally died and come back to life like 9-10 times (depending on what timeline theory you believe in), doing her darndest to help Charles realize this ideal he covets so. I mean, if I’m keepin it a hunnit, mutants should be saying Merry Moira Day to each other on December 25th each year, and that’s on Apocalypse da gawd.

Buttttt instead, Mystique snitched to Emma Frost about Charles and Magneto’s dirty little secret. She snatched up the power neutralizer yopper that Forge built and faded Moira’s gifts of resurrection, then hunted her down like a man-eating tiger B.

In the end, X Deaths/Lives of Wolverine proved a few things. The most glaring for me, is that Marvel will never cease to capitalize on the birth of a good X-Men villain. Mystique and Destiny’s passion filled, hell bent revenge mission pushed Moira to charter a new path to immortality, and in doing so, she became the murderous machine woman she’d been trying so desperately to avoid becoming. It also proved once again that Wolverine is the best there is at what he does, but we don’t got time to get into all that.

While looking like a techno-organic cyborg, Moira is born from her 1st life’s, Moira Kinross’, grave. The X-Men now have arguably their biggest threat to deal with (on top of Nimrod, Orchis, Homines Verendi, etc). Kudos to Jonathan Hickman for mapping out this 3-year heel turn. He really utilized a dusty character that could’ve remained muddled in obscurity and transformed her into the mutant savior nobody knew we needed to help explain 7 decades of X-lore. She has now become mutants most dangerous new foe and reset the timeline to a fixed storyline moving forward.