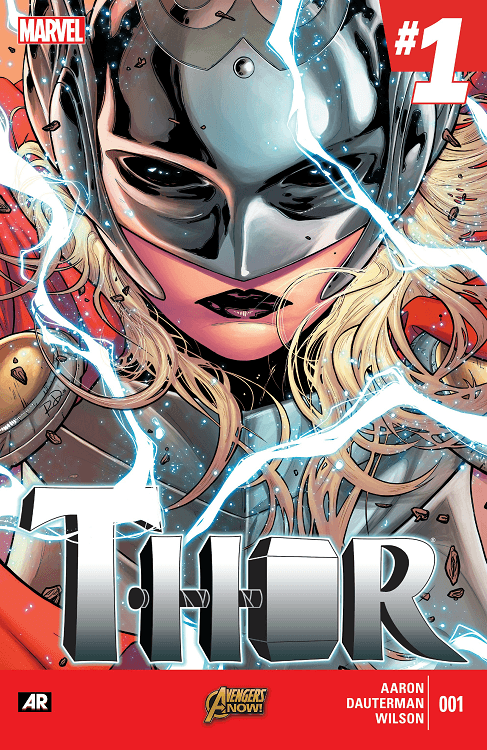 Let me just tell you right off the bat: I will miss Thor: God of Thunder dearly. Although I’ve always appreciated the character in theory, this was the first time I found myself so completely compelled to actually read a Thor series. But now that we’ve said a somewhat regrettable goodbye to Jason Aaron’s masterpiece of a series, it’s time to look forward towards bigger aspirations in the tale of Asgardia’s greatest champion.

Because it’s The Thing People Were/Are/Will Be Talking About when they talk about this book, it’s only fair to get this out of the way now: We see exactly one page of Lady Thor. Granted, it’s a little odd considering how prominent she is on the cover. And the promos. And the news. And this publication. We’re also given no clues concerning what Nick Fury could have possibly whispered to leave The Son of Odin in such dire straits. However, it’s forgivable because it reflects Aaron trying to tell his story untethered by the Marvel Hype Machine. Thor #1 picks up, in part, where the events of Original Sin awkwardly left us with Thor suddenly filed in the “Unworthy” category, denied access to his hammer. The story wastes no time in establishing that it’s a brand new day as far as the status quo goes.

We’re given all of the appropriate themes of misogyny and humility appropriate for the new premise we’re given. I mean, it’s just fun watching the guy have to be a person and deal with situations he can’t just smack in the face or outdrink. Thor has always been a character that’s at his best when forced to learn (or relearn) humility and climb towards his nobler self (I mean, come on, the original premise was Thor learning not to be an asshole) so it’ll be interesting to see his journey from here and how it ties into the destiny that awaits him according to the time traveling antics from Aaron’s previous issues. For an issue that’s really only tasked with establishing “where we’re at so far”, the action beats in this book are pretty strong. And although I’m not a fan of the returning villain we’re given, I have to admit Aaron has a great voice down for him, certainly much better than the one we saw in Thor’s last romcom…I mean “adventure” film.

And, of course, there’s the artwork. Although we got to keep Aaron on writing duty, we had to say farewell to the incomparable Esad Ribic. Ribic’s focus gave us some truly memorable, iconic moments for the character which was appropriate, considering it’s a comic book about a god. And now Cyclops artist, Russell Dauterman, has been given the monumental task of following Ribic’s work in this new series. Granted, Dauterman is NOT Ribic. However, that’s not necessarily a bad thing. Anyone who’s read Cyclops knows Dauterman has a talent for bringing a human element to the visually odd. In a series that so often blends fantasy and sci-fi, this is proving to be a welcome talent thus far. He also does a wonderful job of bringing the reader in close for more intimate, emotionally telling moments with our character. At the end of the day, so far the book proves itself worthy.

Bottom Line: It’s still got a way to go before we see it reaching the heights that God of Thunder did, but it’s off to a terrific start. 8.5 out of 10