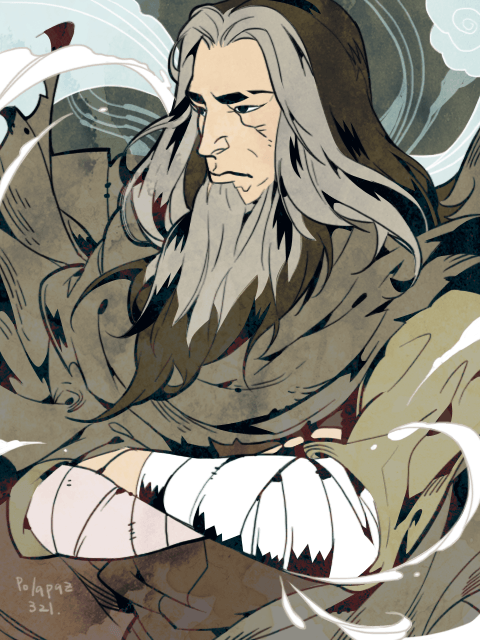 Ahead of every good hero, there is a memorable villain. We’ve seen the best of the worst folks to ever do it spanning across Avatar: The Last Airbender and Avatar: Legend of Korra. Now that the second installment of the Avatar series has come to a close, I just want to say that there’s one dude that deserves to have his jersey raised in the rafters for retirement. Enter Zaheer: The mutha fucking internationally known man of mystery…

The introduction of Zaheer was perfection from the get-go. We were hearing about this guy that already had a reputation that had Lin Beifong, Tonraq, and Tenzin shook without Zaheer even being a bender prior to Harmonic Convergence. Dude was so dangerous he had his own Riker’s Island as a prison. Zaheer was like an emcee coming out of hiatus and reclaiming his set, he basically went God’s Son era Nas on everybody. Will said it best, once you start hearing a dude dropping gems at opportune moments, its safe to say you should probably get the fuck outta dodge immediately. Especially if Henry Rollins is voicing the guy.

2) You Was Poppin Back When Aang Wore An Air Chaaaain, God Damn You Changed

I don’t know that we’ve ever seen someone take air bending to the level of offense that Zaheer has since Aang. Air bending was considered strictly defensive in most cases but Zaheer must have been an ECW wrestling fan cause he was goin Sabu on folks with his bending. It was to a point where I was shouting out, YOU NOT THAT NICE ZAHEER!” at certain moments. The creators said Zaheer obtaining air bending was like “giving a martial arts master a sword”. Well if the sword is synonymous with the rock in basketball, Zaheer was breaking folk ankles and sinking threes on’em till Tenzin finally calmed that noise down. Even then tho, the boy was holding his own. Zaheer didn’t have a lame fight scene with anyone, be it Korra or unnamed guard #4 & #5. Zaheer is that WWF Rock / CM Punk type of wrestler that can make his opponent look good and bring out their best at the same damn time.

Let’s not forget that Zaheer kept it murda music. We only got a clue that Airbending could kill back in ATLA series when Aang found his mentor Gyatso with them fire nation BODIES laid out around his corpse. Zaheer straight up showed us this shit ain’t just for play-play and filling balloons when he hit the Earth Queen with the anti-lamaze class / Fabolous track.

(Sponge Bob got no sympathy or chill for the Earth Queen)


Zaheer had a god damn squad man. Let just get that shit clear to begin with. He had Ming-Hua, a woman that went from 0 (arms) to 100 (water tentacles) real quick. Ghazan, who was the first cat we seen in the game bending them hot rocks aka lava… yeah, I repeat, lava my nerds. Where the fuck they do that there? Then P’Li who was the center for her college basketball team as well as bringing combustion bending back into the game. Fire Lord Zuko said, ” They can take down any bender in the game individually.

These cats the 90’s X-Men meets the Jordan Era Chicago Bulls”. They the definition of “Ain’t nobody fucking with my clique” in the flesh. Not only that but it turns out Ming-Hua was into passing the time with fan fiction of guards lives in jail, and Ghazan was mad down to earth. We found this out when Bolin and Mako were captured and shooting the shit. The squad isn’t comprised of evil people, they just believe in Zaheer restoring the natural order to disorder/freedom. We saw P’Li talking bout how Zaheer saved her from becoming a weapon and introduced her to true freedom… and also being secure enough dating a woman that can own him on the court. Look at these progressive ass “bad guys” man!. Y’all better recognize this squad not new to this.

4) Comin From The Mutha Fucking Void Side, Benders Wouldn’t Make it on This Side

We already know Zaheer got Guru Laghima listed as the greatest emcee of all time. I guarantee you, Guru Laghima mixtapes and albums in the serato of djs in Republic City clubs right now thanks to Zaheer. You know a villain on some other shit when he quoting obscure historical figures. Zaheer was listening to Guru Laghima in the car before battles like B. Rabbit in the Bathroom in 8 mile. Looking in the mirror reminding himself that the honorable Guru Laghima says, “Instinct is a lie, told by a fearful body, hoping to be wrong”. BARS! The most dope game part of all this is how the heroes were just writing off how hard he believed in Guru Laghima’s teachings and levitating from the earth legend (applying them to his own goal of freedom from regimes of course) as nonsense until Zaheer flipped the game on’em and summoned all that LAGHIMA…

They told Tenzen this dude was out in the world flying and even he couldn’t believe it wasn’t vegan butter. Tenzin had the look on his face like Zaheer was Allen Iverson (in his prime) for air benders and just dropped his 40 Bars track then proceeded dust off flying on the air nation skill tree.

What pre-lost his way Lupe say? “They said I was so finished, I told’em it show business”. When Korra had to go back and face Zaheer in jail up in book 4? LOOOOORT! Ironically that Emperor’s Soundtrack was knocking in my head as this cat was unveiled still levitating on another level above folks. Telling Korra, “Shit is hot up in the spirt world homie. Ain’t seen you there. You been cuttin a demo or what?” Korra tried talking that big shit but Zaheer knows ain’t no such thing as halfway crooks and put the fear of god back in her right quick.

However, we got to see the side of a “villain” that we almost never see once Korra tells Zaheer how his whole idea of granting folk freedom by merking the Earth Queen gave rise to a fascist dictator. We see Zaheer actually show remorse and then proceed to let Korra know she got the best of him, Zaheer tells her “your power? No limits kid. I done seen it”.
Zaheer is all about chaos, my man plays sonic and be collecting the chaos emeralds in record time. However, he puts that aside and helps out the fucking avatar, that he was trying to kill only 3 years ago, enter the spirit world.

He gets Korra through the pain he caused of what could have been and back on her world shit. Zaheer use to think the age of the avatar was done, he poisoned Korra with T-1,000 mercury, out-boxed her ass flying in an out for it to take effect, came in for the “take my breath away” remix kill strike and Korra still managed to put that earthly tether back on his ass. This deed Zaheer doing for her speaks volumes after that fight. This is the villain paying respect right here, this is Zaheer admitting Korra got the juice now.

I mean what the fuck we talking tho? We ain’t ever seen it done like Zaheer up in the villain game. This dude is a rare gem man. He complex as fuck, he was willing to kill for his beliefs and did so, does that make him a villain? Even if what he was fighting and killing for was freedom? It makes you question the scale of things. There is still so much we don’t know about him as well. However we do know the content of his character. There is a quote (from Batman Inc) where it is says, “If I’m to be judged by my actions but my actions can bring peace, does it matter if they are violent?”. I think that sums up Zaheer. All he was trying to do was give freedom (natural disorder/ chaos as he put it), thinking it would bring about peace. However, it didn’t turn out that way. Arghhh! This is the type of villains we need in the fucking game man. Also the Air Nation may have been left in the hands of Tenzin, and Korra did help bring the air nation back from extinction, but if bad publicity is still good publicity?… Zaheer put the air nation on the mutha fucking map. I’ma end it with Zaheer aka Void God remixing that Drake 6 God quote cause,

My bendin’ got the whole city in your way right now, So I don’t give a fuck bout what anybody sayin’right now