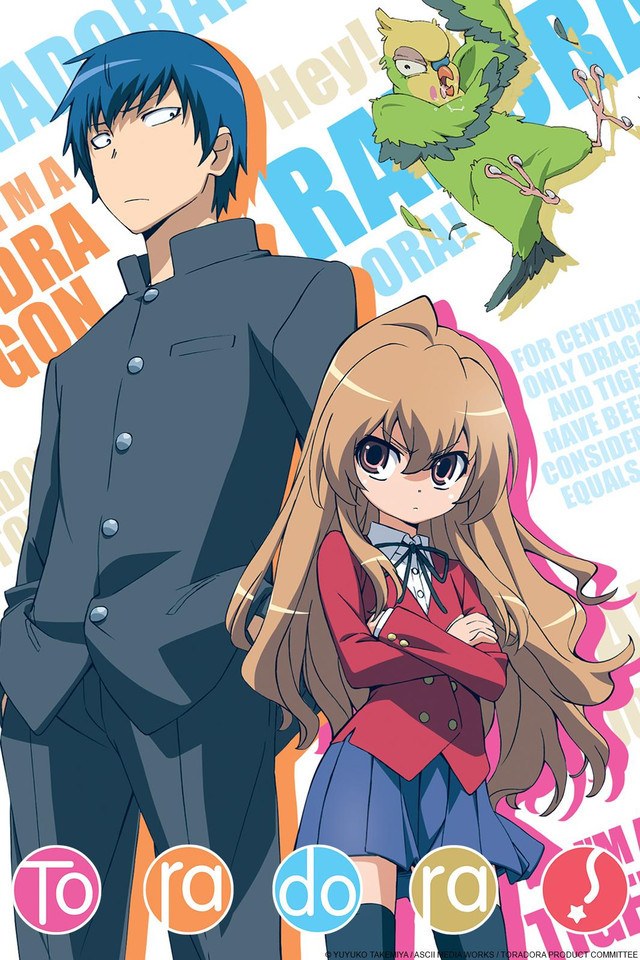 I decided to bite the bullet and start on a new anime series (despite not finishing Free! Season 2 yet). I needed something to fill the trash void in my heart, so I picked a mushy, syrupy-sweet anime, Toradora! This is a 25-episode slice of life/high school romance series from studio J.C. Staff which has given us Revolutionary Girl Utena (GOD BLESS THEM), Honey and Clover, and Excel Saga. Toradora! follows second-year high school students Ryuji Takasu and Taiga Aisaka as they scheme together to get with each other’s best friends, with disastrous results.

Right off the bat, Taiga pissed me all the way off. I personally despise the “cute little anime girl that looks like a doll but is lethal” trope, but here we are with another 20+ episode adventure with this same old bullshit in it. Her short stature, punchey fists, and fiery temper are constants throughout the rom-com, which juxtaposes Ryuji’s tender nature. But GOD DAMN TAIGA IS SUCH AN ASSHOLE. You guys, I tried. I did. But the shit she kept pulling throughout was just not cute. I dunno if this is how business is done in the romance genre of anime these days, but it was infuriating to watch. Taiga was incompetent, petulant, and rude as fuck. 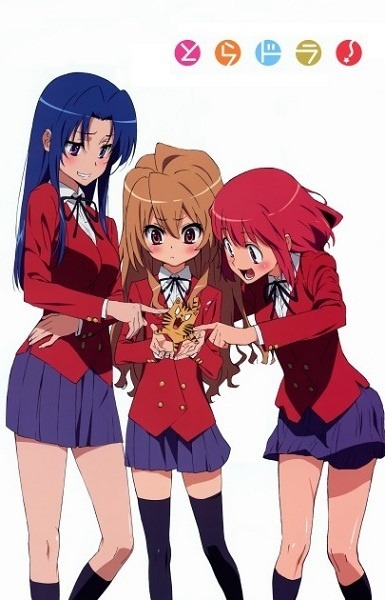 Of course, this was all a “cover” because inside she was truly a “caring” friend, but friends don’t call you shitty nicknames, physically harm you, and demand absolute obedience from you. Now, I can hear the fanboys come a-crying, and okay, okay, I get it — IT’S AN ANIME. That doesn’t mean it exists in a vacuum. Toradora! perpetuates dangerous ideals about toxic friendships in the guise of love. Taiga has obviously encountered unhealthy relationships in her life (i.e., her negligent father), but just because someone hurts you does not give you the right to willfully hurt other people JUST for the sake of asserting dominance.

All in all, this anime was a bit of a struggle for me to watch. The animation style was okay. The voice acting was pretty decent, and the dialogue had some great jokes here and there. The side characters (high schoolers) got a few laughs out of me. (Yay sophomoric humor!) The biggest reason I wouldn’t recommend this anime to anyone would be (can you guess it???) the overall composition of Taiga. They are one of the main characters, and they are terrible. The only time I thought she was halfway alright was when she slapped the shit out of Ami (who was being an ass).

That part was funny, but it didn’t save the “PalmTop Tiger” for me. 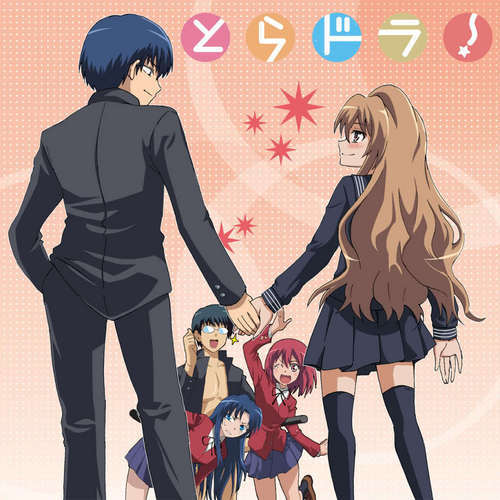 I will give the series props for addressing parental abandonment through Taiga’s interactions with her father, but I do wish they took it a step further to address how toxic Ryuji’s mother is (childish, dependent on their kid, unable to behave as an adult, etc.). How did these situations help form the personalities of these two characters? It would’ve been really interesting to see those issues worked through. Other than that one theme, I really don’t think anyone needs to see this. If you got the time, why not, but there’s better stuff to binge that doesn’t involve such an annoying main character.

You can find Toradora! streaming on Crunchyroll!