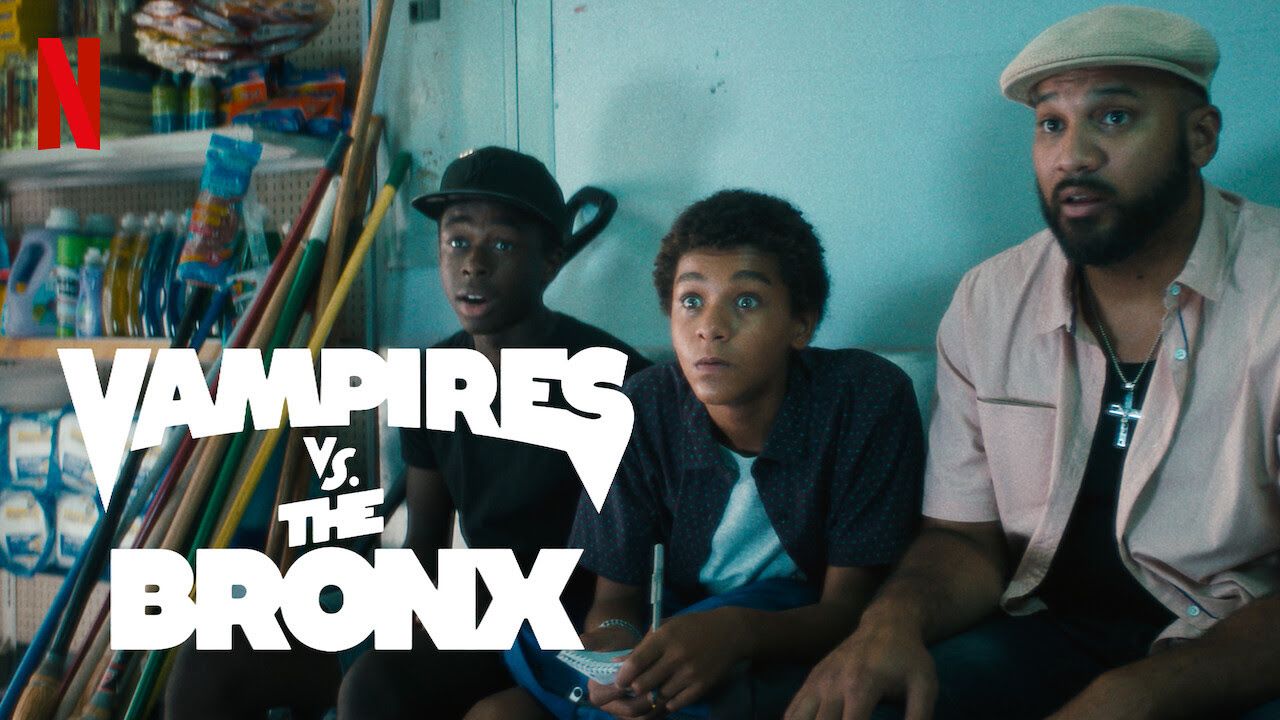 Vampires vs The Bronx is by The Bronx, for The Bronx, and will slaughter any invaders. An instant fan favorite, this film has so much heart and wooden stakes for the gentrifiers. At the core of this film is a sentiment that The Bronx is all about survival and grit, community, and straight-up Capicu!

If you are not a Bronx resident you can still enjoy this flick, but your heart might not yurrrr the same way. If you are from the city, you’ve definitely got buy-in but you might miss the little nuances that are so Bronx. Light spoilers from here on in.

Grand Concourse: (They Reminisce Over You)

The film begins on a dark and stormy night. Well not really it is dark, not stormy and it begins with…Zoe Saldana!? Yes, the actor known for her role as Gamora in the MCU plays a nail technician named Becky, taking the buyout from Murnau Properties.  I laughed out loud at that statement. Zoe Saldana, a Becky who owns Rebecca’s Nail Salon, is selling out! Realtor Frank Polidori played by Shea Whigham (Det.Burek, Joker) offers something around $50,000 to Becky to purchase her salon, as she celebrates getting out of the hood. All of this happens just after she finished up a late walk-in manicure for a white woman who has just moved to the neighborhood. She is a petite blonde woman chatting about how she got priced out of her old neighborhood and is so astonished by The Bronx; amazed at how ‘no one really knows it’s here’!

We find out real quick that the buyout is a front and our girl Becky gets slayed (I told you there would be spoilers). This whole moment sums up the feel of the film: Spanglish, white ladies backhand complimenting The Bronx, and gentrifying bloodsuckers.

We’re then introduced to our protagonist, Miguel Martinez played by Jaden Michael (Rafe, The Get Down) and is looking to save his local bodega with a block party fundraiser. While passing out flyers, we learn about his freshman year awkwardness, crushes on older girls, and his drive and ambition. Seemingly the leader of his friend group, comprised of Blerd Luis Acosta played by Gregory Diaz IV (Sonny, In The Heights) and Bobby Carter, (Gerald Jones, The Get Down). Things escalate quickly when Miguel sees a vampire attack on his bike ride home.

Kingsbridge: (Ain’t No Half Steppin’)

The Bronx spirit is strong with this one from the on-location shooting to The Kid Mero running a bodega! We see the dudes on the corner playing dominos and the variety of brown skin that makes up The Bronx. It’s hard to get that right, there are so many stigmas, stereotypes and narrow-minded thoughts of what The Bronx is, and this film does a great job of creating a portal into the truth about The Bronx.

The humor in each moment, the deadassness, the community, and the pride is a glimpse at the realness of The Bronx. I say a glimpse because it’s still a movie, and is still geared towards a family audience. Some deeper details are not included, like the amount of “F— outta heres” that should have been and the true beating of the villains would have been nonstop and hard-hitting. Them vampires wouldn’t have had a second to hit back.

The gang of kids all have their story, reflecting the micro and macro of issues facing The Bronx. We have our lil’ homie Bobby getting influenced by that hood life. Now, this trope seems over worked in many city stories, but it is a fact of young life. There’s the dude on the corner offering easy money, and the kids who are enticed. They either resist or get swept up. I appreciated this narrative, even though it had been done many times before. You can’t deny the ‘matter a fact’ aspect of it all.

I will say right now, the film needed more Rita. Rita, played by Coco Jones (a somewhat newcomer to the mainstream) is the “older” young woman and crush of our protagonist. Every moment that someone does not believe Miguel or “Lil Mayor” as they call him (which sounds like ‘Lil man’), this girl backs him up with some real nerd facts. Giving us the tea on why the vampire couldn’t be seen on the video and whatnot. Then we find out she’s Haitian too! This character should have busted out all the badassery that they set up for her. But they used her as a mechanism to bring other people in rather than give her the shine. It wasn’t a dealbreaker, but my heart yearned for more Rita.

But big ups for representing the real Bronx Blerds. Luis comes to the aide of his friend when he hears vampires are looking to take over their block. He comes with the ill knowledge on how to defeat the vamps but confesses he still needs to do some research. When they hit the books, they break out the real guns. Watching Blade in the Bodega and taking notes. ‘Nuff said.

The film uses what it has at its disposal to its full potential. Special effects at the B-movie level and absolutely perfect! A real cult classic feel, for sure.

The final stand off gives you Lyyyyfe. Let’s get this clear, I am a Bronx transplant, living here for 15 years. I’m not born and raised, but def Bronx made. When our antagonist said, “This sh–hole borough!” I yelled, out loud at the screen, “What’d you say?!” I was echoed quickly by one of the corner homies Andre (SNL’s Chris Redd), “Yo, what’d you say about The Bronx?” I was like, “THANK YOU!”

(Yeah, she hit her with a Timb!) One of the standout performances was the character Gloria, played by Imani Lewis and also known as Emcee Mocha Bands. Lewis can be seen in Netflix’s recent film by creator Rhada Blank, The 40 Year Old Version. Gloria is live at all times. Letting the Twitter, IG, FB, Snap Chat, and Tik-Tok fans know the real deal. She GOTTA keep it a hunnit (translation = 100).

When it comes down to it when the ish hits the fan, she threw the kitchen sink at ‘em and a Timb! She actually, physically threw a Timberland boot at the Vampire leader.

That, and the dominoes table being used as a shield (CAPICU!)?!? Took me right OUT. DEAD. And Method Man plays a priest! Good, clean fun.

The real story being told in this movie centers on gentrification. If you don’t know, for a long time many people felt as though The Bronx has to be gentrification proof. No one would want to venture that far, no one will forget the ‘Bronx is burning’ era, and everyone believes The Bronx is still a war zone. All of that is supposed to keep the gentrifiers at bay. But the real ones know money can’t keep anyone away. If there’s a rezoning there’s a way. Neighborhoods were being renamed as the ‘The Piano District’. Instead of SoBro being recognized as a decades old community organization for South Bronx residents, developers made it the hot, new name for the South Bronx. Where once we had vacant lots and factories, loft apartments and high rises are popping up. Darkened underpasses, where you used to have to walk in pairs were adorned with exposed wood facades and bright, inviting LED lighting. This all sounds great, but not when you know these changes are not made to benefit longtime residents for the betterment of your quality of life; but for the ones who don’t want to see the evidence of your past, your existence from before they moved in. Those are the condos you can’t afford and the million-dollar apartments you wonder ‘who can even afford to apply?’.

Vampires vs The Bronx is grounded in the fear of gentrification’s intentions and the innate desire to fight against those forces. The white woman Vivian, played by Sarah Gadon (Elisa Montgomery, True Detective) comes in to get her manicure, introducing herself to the locals as the ‘unassuming white lady’ that no one seems to know from whence she came’. And why does she says ‘bodeega’?

The closing of hood staples and opening of new stores with rash inducingly irritating hipster names was a great touch. Like ‘Bone and Thread’ (“I know, right? Is it a clothing store or a restaurant?”) and ‘Butter’ (serving artisanal small-batch butters and spreads)? Then I’m DEAD at the bodega offering a ‘Chopped Cheese on a Croissant’. You cannot help but laugh at it because it’s ridiculous and also accurate AF.

But the real message is of a ‘forgotten place’. The world has always believed The Bronx could be bulldozed, including the Mayor and Governor themselves, once upon a time. When the main villain says, “It’s so much easier to be somewhere where no one cares if you disappear.” I flat out could not hold back the hood tear rolling down one cheek. There was a time in The Bronx, and still is, where young women have disappeared and the cops have refused to do anything about it. Simply saying they ran away from home or deeming cases suicides without proper investigation. This is one of the more serious issues in The Bronx that Vampires vs The Bronx highlights and speaks more truth to power than I think anyone really understands.

For the movie to choose vampires, a blood-sucking horror villain, a primarily European one, and for them to be taking over the businesses and landmarks that The Bronx claims is an intelligent choice. To do it with humor is a Bronx choice. It’s an emotional choice, a strong choice. Even though this movie is just the tip of the iceberg of The Bronx, the pride is beaming throughout. As Gloria said, “You don’t want no smoke wit The Bronx.” And The Bronx always remembers.