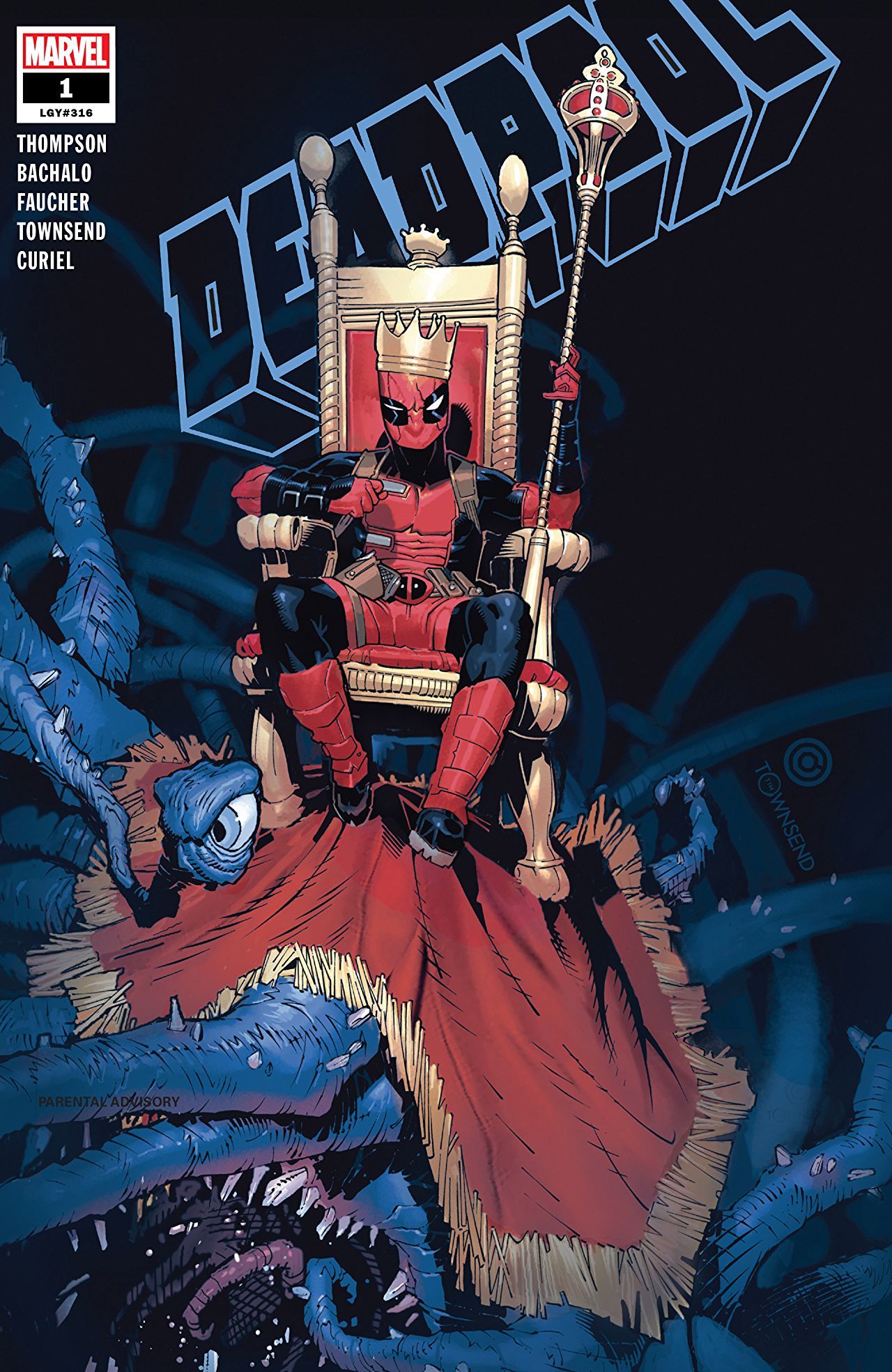 Nobody likes Staten Island. We’re back with Deadpool #1 so you know what that means, a new and bigger target. We begin with the Monster King, and we meet Wade already torn in half in the first few panels. As we see him slowly heal, notice the artistic direction taken across the flashback Deadpool provides for his birthday memory. It stretches across the rest of the first issue. Deadpool #1 is all about the “split”. What our priorities are versus what we want for ourselves and how sometimes the intersection does not prove to be easy to acquire.

With color, Bachalo used Deadpool’s highlights in the midst of black and white. Thompson’s introduction to the painful gray area when you can tell something is about to hurt before it actually does sets the stage for a beautiful inference for the rest of the issue. Deadpool #1 taught me: 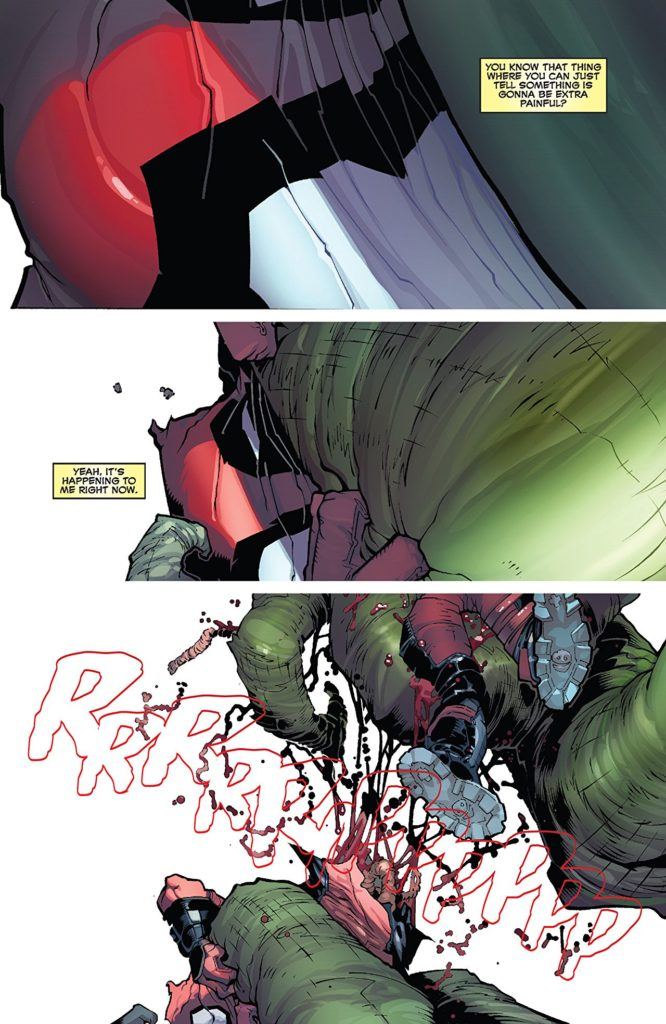 If there is one thing we know about Wade Wilson, it’s that he is impulsive. Often participating in grand gestures that would be seen as dangerous, but since his regeneration is impeccable he’s not always punished for his recklessness. In this issue the Thompson-Bachalo team attacked his impulsiveness through his humor, relationships and fighting style. Readers can sink into the emotions of Wade through chaotic art panels, that do not feel messy and displaced but rather reflective of his emotions in the situation. 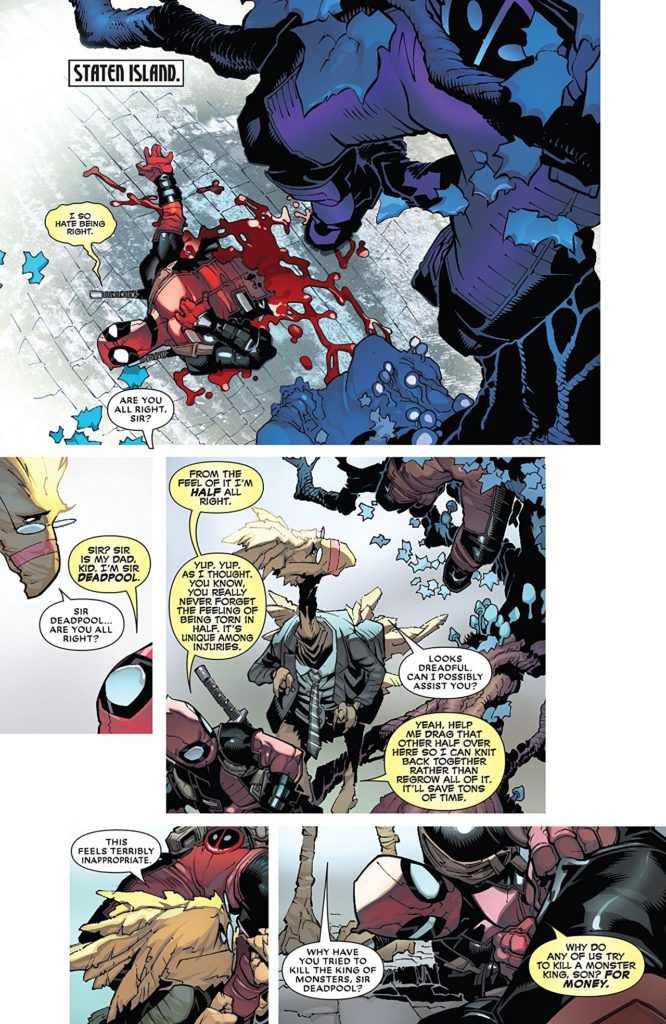 From his lonely celebration night to the search for excitement while taking on the responsibility of an empire, we see Wade digging himself into a deeper hole. At times it felt like trying to search for meaning in the midst of loneliness. He’s just pitting recklessness against his own desires and through the whole comic I keep asking myself —

Bast Almighty! Wade, are you okay?

In this issue we still get our saucy mercenary who doesn’t know the right time to shut up, the right basis of all good things Deadpool. What I hope to see in future issues is the different ways in which Wade handles his stoic emotions. We see it in the fight with the Monster King and we see it in the slow tear of an empire he took over, but what are other clever ways can we see Deadpool face his inevitable sadness? Deadpool #1 introduced the pains of regeneration. When you’re too numb and you’re trying to find modes of escape. I am excited to see what this creative team does with Deadpool’s humor as well as the construction of sadness that showcases the various layers we have yet to discuss.