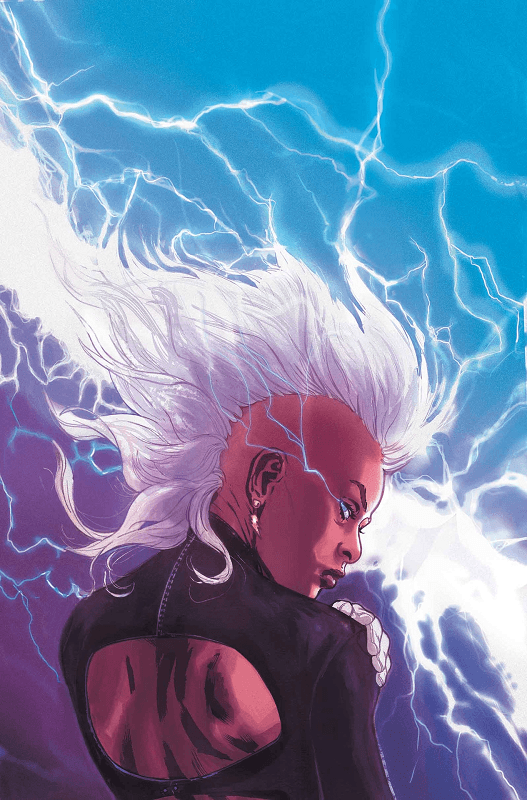 I have two confessions:

– When X-Men was released in theaters back in 2000, I had little detailed knowledge of the X-Men comic books or Storm’s portrayal in them, even if I had the very basic ideas of both. Essentially, I didn’t know enough to be outraged by how Storm was portrayed in that and subsequent films when they were released.

– I don’t think Halle Berry is solely to blame.

Lets not be mistaken, Ms. Berry is terrible as Storm and she shares a large piece of the pie graph for that. Not only is she miscast as the weather slinging goddess, but she also does little to nothing with the role to make it memorable, at least in any good way. I don’t really want to get hung up on the “how much does Halle Berry look like Storm” argument because I think most of us would rather have a good actor in the role then a 1 to 1 match of how they were drawn, as long as it doesn’t betray an important aesthetic of the character. This isn’t Zoe Saldana / Nina Simone territory folks. Even if I don’t agree with the casting of Berry for Storm, I can certainly understand it. Whether we want to admit it or not, Halle Berry was the most popular Black Actress on the planet in the late 90s to early 2000s. Lets not forget, when X-Men showed up in theaters, we were getting Jungle Fever, Losing Isiah and Boomerang Halle Berry. She had just turned in an amazing Dorothy Dandridge performance the year before. It wasn’t till after X-Men that we got Swordfish, Catwoman and Die Another Day Halle Berry (though to her credit, Monster’s Ball got her the Oscar in 2001). My point being, Bryan Singer went out and cast the most popular Black (and general consensus confirmed, beautiful) woman in film to play the most popular and beautiful black woman in comics regardless of what kind of fit it was. So, I’m sorry, I get it. Was he wrong? Yeah, he really was, but I see how it made sense at the time. Here are my five most egregious errors that the X-Men movies have made in handling Storm.

1. The Halle Berry vs The Role vs “What did she do to her hair now” problem.

Here is where I’m sure people want to push back, but frankly this much is true: Halle Berry is (or at least was at one time) a very good actress. Seriously. Now, she’s a very good actress that has done plenty of terrible films, but she actually has ability. Introducing Dorothy Dandridge, Frankie and Alice, Their Eyes We’re Watching God, Monster’s Ball, Jungle Fever…you don’t stumble into those roles without some chops. The problem with her as Storm is that because of her popularity, they probably gained some popularity pre-release, but that quickly dissipated once people saw the movie. Part of it is Halle not being very good in the film. Part of it is the atrocious writing for Storm. And part of it is how marginal a role Storm has been given. This was basically filling up your Ford Pinto with premium gasoline. Because of her name and rising star, there was an expectation for Halle as Storm that was never fulfilled. If you are going to have Halle Berry as a “major” character in your film, give her more to do. If not, give the role to somebody else with no expectations.

People forget why the X-Men Origins: Wolverine movie is named that way; it is because it was supposed to be a series of Origin films with Storm getting the next one. While that sounded like a terrible idea on the surface (and one of the reasons it never got made), I think I actually would’ve welcomed it just to let Halle stretch and try to do something with the role besides look worried, then raise her arms and make her eyes go white. But then, you’d have to do a story of this beautiful African woman with alpha mutant powers and you know…Hollywood. Speaking of which…

2. Storm was once worshipped as a Goddess and we shouldn’t forget that.

Every back story worth its salt (especially during her reign over Wakanda…I know, I know, sore subject) talks of Storm being thought of as a Goddess to her people and others because she possessed the godly ability to control the weather. And really, what’s more godly than turning clear skies to dark and vice versa? Even presently, there is still an awe for many people when Ororo is in their presence, that they are lucky to be witness to such divinity. Get any whiff of that from these X-Men films? I don’t think they should make everyone bow when Storm enters a room (I mean, I think they should, but I don’t expect it), but there should at least be some of those “Oh shit, you’re Storm, I am not worthy” moments sprinkled throughout the movies. Right now, she’s just homegirl at the weird school who can turn her eyes inside out.

3. Storm was once a master thief and we shouldn’t forget that.

One of the reasons people love Storm through all her history in the comics is that she is so versatile as a character. Goddess. Rogue. Lover. Rebel. Leader. Brawler. Yes, brawler. The movies have really missed an opportunity with Storm, especially with the fight scenes. With the pretense of the beautiful cover girl that is Halle Berry or how they validated it in the movies, I’m sure some believe that Storm is too cute to break a nail.

The reality is, Storm isn’t afraid to mix it up or get into a street fight. We’re not selling any delicate porcelain Storm dolls over this way.

4. That’s Headmistress to you, plebs.

Even if they failed to play up the Goddess aspect of Ms. Munroe, can we at least see that she’s in charge of some shit? Storm is such an afterthought in these movies, you’d think her power outside of controlling the weather was bouncing down some stairs with a very Halle Berry haircut. Not only is Storm a much more important presence in the Xavier School for Mutants than portrayed in the films, but she’s also led her own teams, headed mutant organizations and resistances. In the movies, she’s along for the ride in case the jet encounters heavy rain.

Look, I am the first to admit that I hate seeing love stories shoehorned into stories or for people to unrealistically be linked to love interests for the sake of getting a certain group of people to the theater, but let’s look at this from the movie producer side for a second. The foundation of the X-Men movies are basically built on a love triangle of Jean Grey, Cyclops and Wolverine (don’t get me started). Then you have the Bobby Drake / Rogue situation (still not getting started) which makes them more memorable than either of their movie versions probably deserved. Basically, Storm is sitting up in her room like Brandy, while the other less pretty people find love. I’m not saying you can’t have characters who are basically asexual or not attached to anyone else in an intimate way, it just doesn’t make any sense for Storm. When it comes to relationship status, she basically is the same as Professor Xavier without any of his respect, relevance or power. In the comics, Storm is rarely alone and is highly desired by those around her. So if you’re scoring at home, Storm, goddess, played by Halle Berry in the movies, not only has no interest in being involved with anyone, BUT NOBODY IS INTERESTED IN HER? Aiight. Admittedly, this gets tricky as her three most popular love interests from the books have been the Black Panther, T’Challa (IF YOU ALL GET ME STARTED I WON’T BE ABLE TO STOP), Nightcrawler (doable, though I would’ve liked a little more confident Kurt Wagner in X-2) and Wolverine (lesigh…we should be thankful for some things not happening I suppose).

At the end of the day, when the X-Men are inevitably rebooted with a different cast, lets hope our Goddess gets a little more VIP treatment. And you know, maybe a Mohawk.