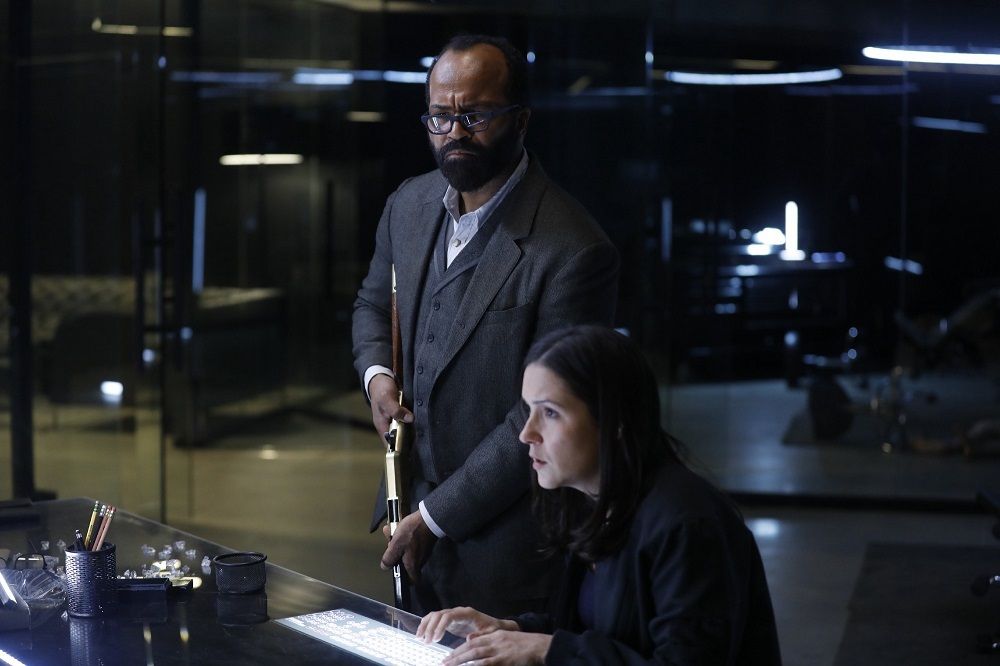 Maaaaan, listen. we back on that Alfred’s quiet contemplation with Blue Dress Dolores again. We pick up from that moment where you boy is like, yeah, you kind of scaring the shit out of me Skynet, so we might need to slow this down. He talkin’ about he’s gotta make a decision, but he doesn’t know if it’s his decision to make.

Actually no, fuck no. That’s not what the fuck we bout to do. At least, not D-Block in Dolores clothing. She’s like, actually Bernard, cuz that’s who the fuck you are, Bernard, stop your ass right there. Gotta love that D-Block did the “limit emotional effect” on herself too. She host-splained his ass and was like nah, it didn’t go down that way fam. He didn’t question if he should, he questioned if he was going to. Aka, the first part of that choice been made. Then she hit him with the Papa Delos test, we just gonna make sure your fidelity up to code. 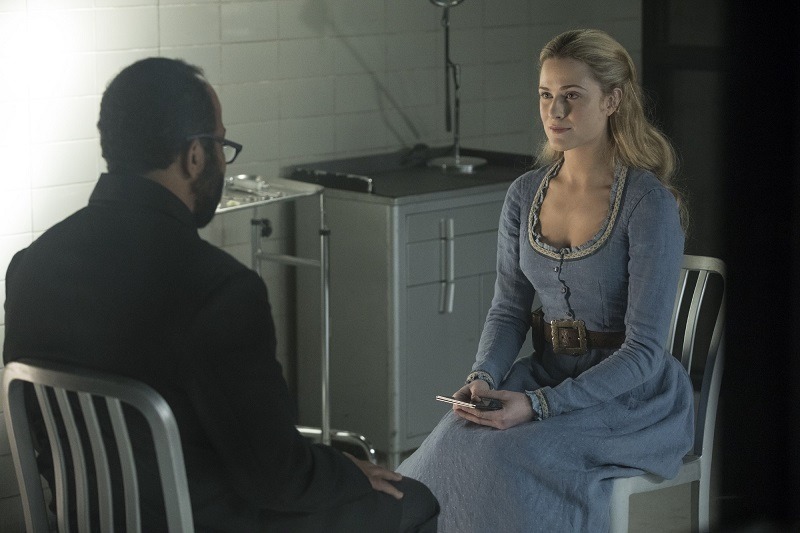 Fam, the fuck is going on? Did this shit happen? Was this a fucked up Bernard dream/backstory. Like…I need more…but we not gonna get it yet.

So that Teddy upgrade took. Your boy out here like T-1000 with a clear objective and no humanity left in him. D-Block is like, you’ve died so many times and— 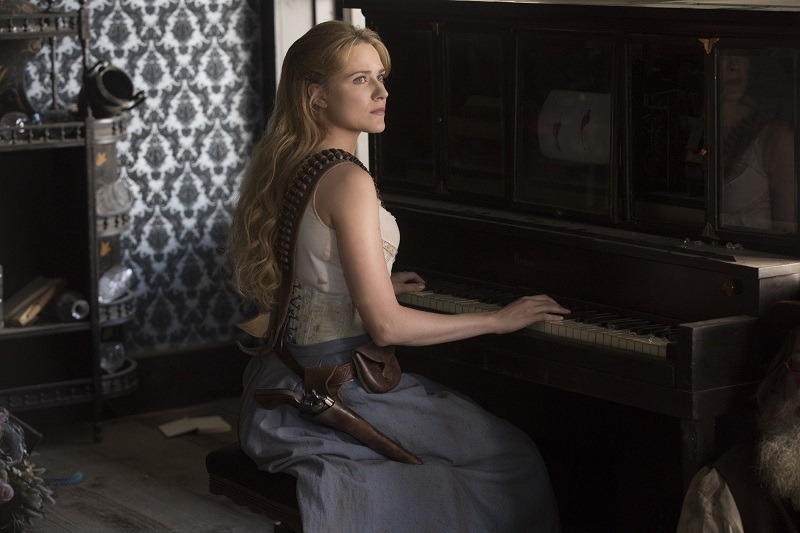 They by the train trying to get info from one of the recovery teams. D-Block wants to know where they can find her pops and he’s like, fam, as all the bruises and cuts on me show, I don’t fucking know. Teddy is like, yeah, he don’t know shit and it don’t matter. AND SHOOTS HIM IN THE FUCKIN’ HEAD. Yo, that wasn’t no cosmetic change on Teddy. Dude didn’t just get some new shaders. They done went Hollywood Hulk with this cat and turned him full heel. Even D-Block wasn’t ready for that shit. And if some impromptu violence got D-Block shook, then this shit not bout to get any better.

Ashley up in HQ looking at all the carnage when Charlotte rolls through. She’s got Abernathy, but Ashley still pissed he didn’t know what was going on. Bruh, he gotta let that shit go and try to make himself important moving forward. CUZ HE’S NOT IMPORTANT RIGHT NOW AND HE DON’T KNOW IT.

Delos is finally coming since they got the asset, but they gotta secure Abernathy. Which means, they gotta crucify this dude to a chair. I mean…could they at least turn off his pain receptors. Jesus.

It’s been a hard days night for Maeve who has literally been up slaying samurai all night long. All. Fucking. Night. Ayebody dead and Akane still over Sakura’s body. And then…cuts out her heart. Look, we just gonna assume this a tender ritual and not gonna get into the politic of cutting a muthafuckas heart out to return it to the homeland or some shit.

Maeve coming back to town to retrieve the rest of the New Narrative crew. She still going Professor X on these fools and making them merk themselves. She almost does the same to the leader Tanaka but your boy Musashi is like, nah. Your boy been talkin’ that big smoke, I GOT THIS WITCH. Akane wants Maeve to step in, but she like, nope, this whole fuckin’ thing is about free will. Gotta be able to choose, even if it’s death. Yo, this sword fight was legit. Le. Git.

Samurais Got That Work

Tanaka wasn’t no punk, but when Musashi grabbed his second sword, it was game over. Musashi Two Swords gave your boy the flurry, then, took his damn sword hand, yo. Musashi even gave him the courtesy and let that dude perform Seppukku, but as soon as he faltered, Musashi Two Swords did him the honor and took the head. MTS ain’t nothing to fuck with. 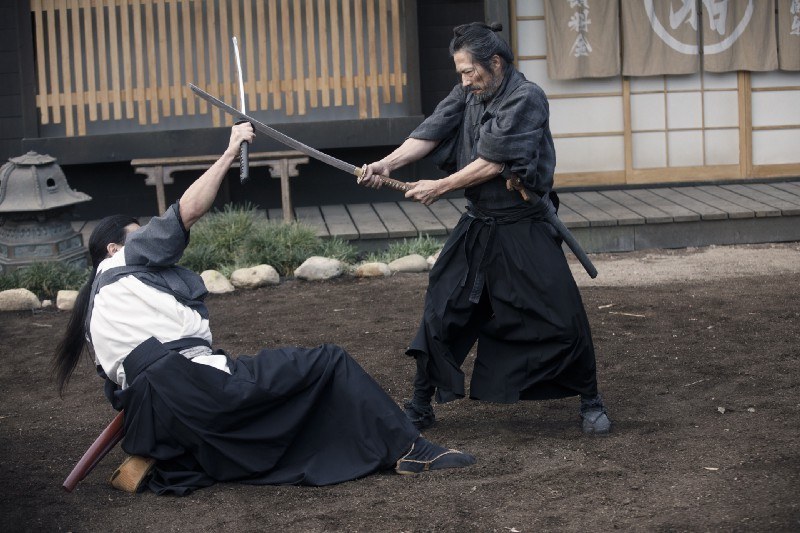 Got That Legacy in My DNA

William in Black and his crew still rolling through the hills and come up on a crashed caravan. Apparently, WIB ain’t talkin’ to his daughter Emily, even though they must have been riding for a while now. WIB is convinced that she’s a host and that Ford is still fuckin’ with him. Emily is like…you fuckin’ crazy, yo.

Emily proves she ain’t just fuckin’ around when she realizes that the caravan is a setup and shoots down the bandits before they ambush his crew.

Elsie, the only person still doing her job well and Bernard on the move. The enter another part of HQ and spoiler alert, more bodies. Well, host bodies but bodies nonetheless.

They get into the mainframe and see that the Cradle has been fuckin’ with the folks trying to hack in and fix the park. But there some ghost in the machine preventing folks from doing it, responding in real time. Bernard and Elsie gotta go to the source and see how this shit happening.

Maeve and the New Narratives finally arrive at Snow Lake. Where they can put Sakura’s soul to rest and also, as a side note, get the fuck outta here. But why Felix gotta be the one to test the escape chute with all the bodies at the bottom. Sylvester got the least amount of clout here, how he not the guinea pig for all this shit? Even the lowest white dude fam…

So, real shit, Snow Lake is kind of beautiful. Even if everybody here still draped in all kinds of blood born pathogens. They perform the ceremony for Sakura, but Akane lets them know they ain’t traveling with Maeve. They gonna stay here and defend the land when the colonizers come. Which is a shame cuz Akane and Musashi are pretty great characters (and let’s be real, non-white characters). Be a damn shame if we don’t see them again. Even Hector gotta pay that respect before they bounce. 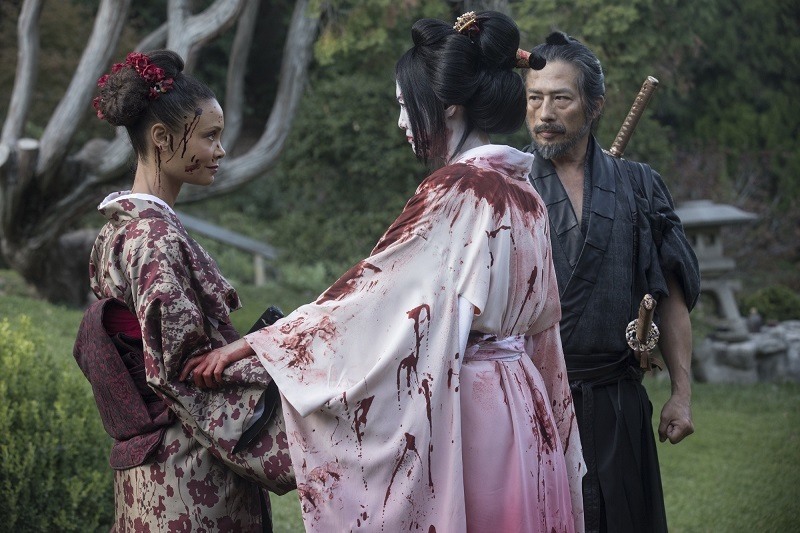 The Inheritance On Hold

Emily and WIB at the campfire and apparently, WIB doesn’t drink in the real world. Yo, your boy really did craft two completely different lives. Emily is like, yeah, I was done with you but then I was like, I could use some of this vacation time and see what’s what in the park. Go back to the Raj. Get my pleasure on. Which, WIB was not trying to hear that shit.

She goes on about how mom was always convinced that the place could hurt them. Welp. Emily didn’t plan on catching up with pops, but when shit went off the rails, she found her way to him. She always fucked with the park, but she recognized it as a fantasy, what it actually is. Which is why she is pissed off that WIB still bout this life. Then Emily drops those bars about how she came to find him cuz she ain’t trying to lose him like this. And also, that she was wrong to blame him for her mom’s death. Yo, real talk, action sequences aside, this scene was amazing.

The Emily character brought a gravity to this show we been lacking a bit. WIB asks if they head to the beach and forget about the park if they’ll be even and Emily says, “that will be a good start.” Which also means, holy shit, you might be able to have a relationship with your child in your twilight years. Sounds like a good deal…

…which is why it’s no surprise that when sun up happens, WIB and the crew is fucking ghost while Emily still sleeping one off. Just one fuckin’ host there still tending the fire. Emily is fed up yo. 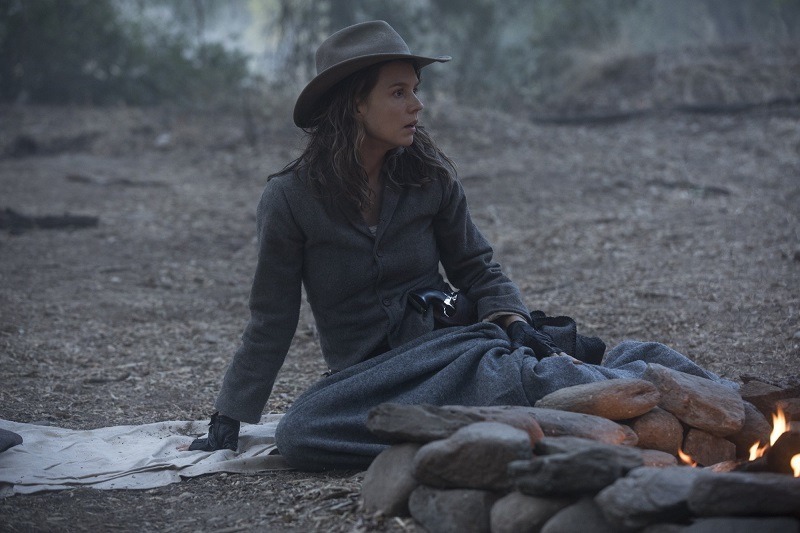 Elsie and Bernard arrive at the cradle and this is the hive mind of all the fucking host, active or not. Which is Skynet ascendance if I’ve ever heard of it. Bernard remembers that he brought some consciousness here before. Ford got the system on lock, even from here, so Bernard is like “put me into the matrix Tank. Gonna get to the bottom of this shit.” Bernard going into this shit with no anesthesia. Elsie is like, yeah, I can’t turn your pain off, then Bernard responds with the hardest shit.

There’s no time. Pain is just a program. 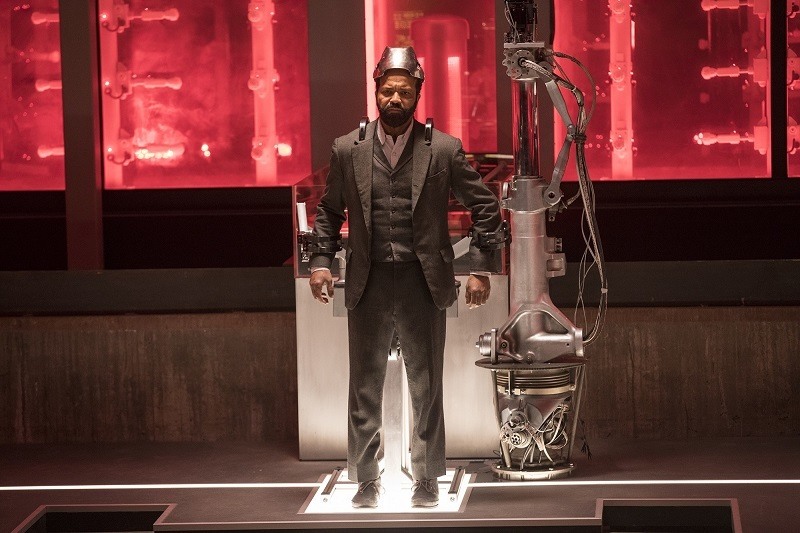 I say gotdamn. And just like that, Bernard is on the train, inside mother brain herself, riding into virtual Westworld. He making his way through town like this shit was day one. Everybody is pleasant. Dolores ain’t realized her D-Block evolution yet. Teddy ain’t murdering folks.

Ashley sees Delta team parachute in and these muthafuckas the real deal. They also ain’t fuckin’ with Ashley and just bypass his ass, name shaming and all that.

[Back] Home on the Range

Maeve and the New Narratives pop up on the planes, where Maeve remembers every inch of it. She this close to seeing her daughter again and Lee can’t help himself by patting himself on the back for getting them here. Hector ready to roll with her but Maeve is like, yeah, I got this solo fam, I’ll be back. And…this kind of feels like the last time they’ll see each other. Just sayin’.

WIB, minus Emily rolling through but they run into an ambush with the Ghost Nation. WIB ain’t trying to stand and fight, instead, they haul ass up outta there.

Maeve sees her home, you know the one where WIB once saved them, then murked them. She rolls up on her old house and sees, yes, her former daughter playing with a doll on the stoop. Man, this was heartwarming but you just knew the bottom was gonna fall out of this shit. Right when Maeve is finally making a connection with the daughter she’s been searching for, she here’s a “Hello” from behind her. Yo, this wasn’t Adele. This wasn’t Lionel Richie. This was the 2018 Maeve Model.

No Trade In Value

Of fuck nah, man. Maeve really turned around like, Who the fuck is dis bih?! Was for real so scared for new Model Maeve man. I thought Maeve was gonna hit her with the Code Geass and make her hang herself on the clothesline or some shit. I mean, maybe she was about to, but we know what comes in this narrative, yo. Ghost Nation BACK.

Maeve don’t even care about new Model Maeve, she just grab the daughter and JETS. Ghost Nation coming down on them but the New Narratives ain’t bout to let that happen. Hector, Armistice, and Armistice with the Dragon Tattoo start firing on the Ghost Nation. Felix wants to join in too but wobbly spine Lee is like, yeah, I’m good. He pulls out the phone cuz he tired of this shit.

They’re almost there, so Tyrannical Teddy gives Unnamed Black man number 1 a gun with one bullet in it talkin’ about “this the last of my mercy.” They leave him on the train car, which looks like its headed, full speed for HQ. 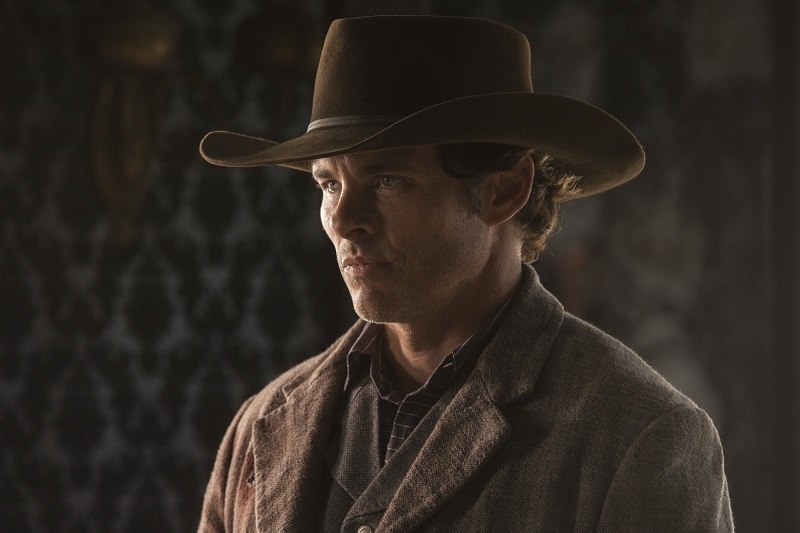 In HQ, they still can’t get into the systems online, but they at least got the map. Just in time to see the train. Headed directly for them. And yo, the train ain’t slow down for shit. That muthafucka smashed right into HQ with all the kaboom, fam.

Elsie felt the explosion but she can’t do shit while Arnold still in the cradle. He watching the town behaving normal, but he sees the dog…the dog from Robert’s old family. Which damn sure wasn’t usually in this town. He walks into the saloon, seeing familiar faces and hearing a familiar tune. And who on them keys? Who out here getting his old-timey on? Robert. Muthafuckin’. Ford. THE FUCK YOU THOUGHT THIS WAS?!

And all he got to say? 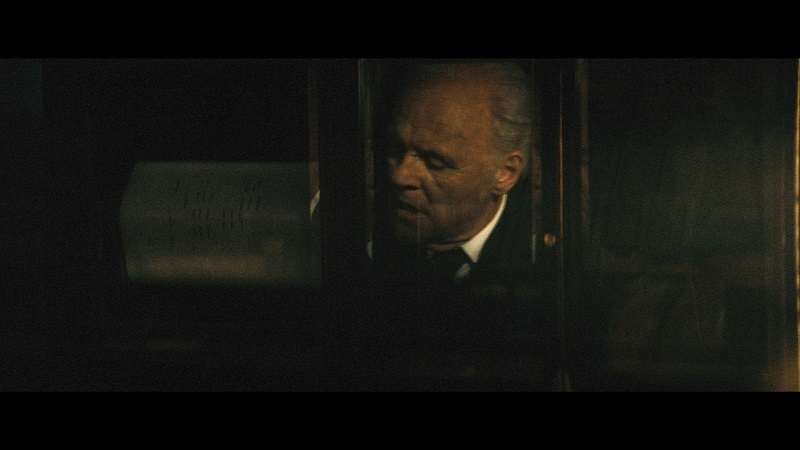