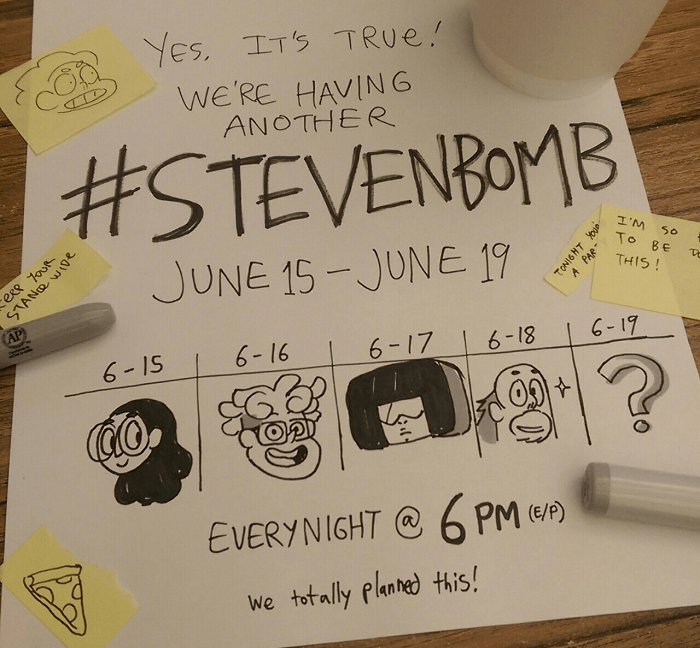 At 6 PM a few Fridays ago I walked into the door of my grandparents’ home and did something I never do: sat down immediately in front of the TV set and watched what was on, entranced, with my little sister. It’s mostly the difference in age, since at 11 she likes to watch the Misadventures of Quirky White People on the Disney Channel and I… prefer to skip television altogether. What made this moment different, of course, was the finale of that week’s brand new Steven Universe episodes.  While I tend to heavily identify with the maternal and neurotic character of Pearl, my baby sis loves wild and blunt Amethyst, yet somehow we both find ourselves enjoying the same material regardless. This gives me a chance to see how my little sister already absorbs the positive messages that Rebecca Sugar and the Steven Crewniverse attach to every episode, lessons I know I definitely could have benefited from at her age.

By now hopefully you’ve had time to catch up on and possibly recuperate from all the feels (although let’s be honest, one never heals from the feels, we only learn to live with them), but just in case: spoilers to follow! That being said, let’s take a look at our first episode. 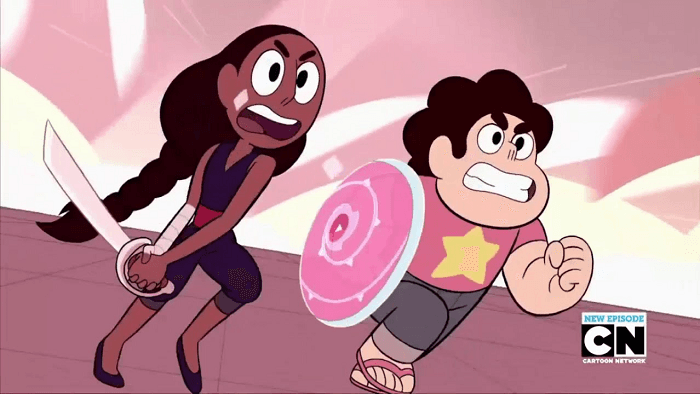 [divider type=”space_thin”]
“Sworn to the Sword”

Considering how the cartoon romances on TV at the time I was kid were either like Sailor Moon and Tuxedo Mask (heavy on the destiny drama, light on the communication), Muriel and Eustace (oh, hello abusive relationship), or throwbacks like Pepé Le Pew and NO-MEANS-NO-DAMNIT the Cat, it’s no wonder why franchises like Twilight or 50 Shades of Grey have done so frighteningly well. What’s beautiful about this first episode in StevenBomb is watching how Connie not only subverts these tropes by learning to openly communicate with a partner/crush, but to also realize that one-sided sacrifice can become forced, unwanted affection to the receiver. Too often young women (especially young women of color) get taught that romantic “compromise” means giving up yourself and feeling like you are “nothing” over and over again in exchange for a little bit of attention (or perhaps in Pearl’s case with Rose, praise and appearing worthy).  Additionally, Connie learns that authority does not equate with unquestioning obedience, a valuable lesson in personhood and asserting one’s identity that I think all children (and some adults) need. Also, let’s be honest, Omar’s already done a pretty good job of explaining why Connie’s a badass role-model in general. 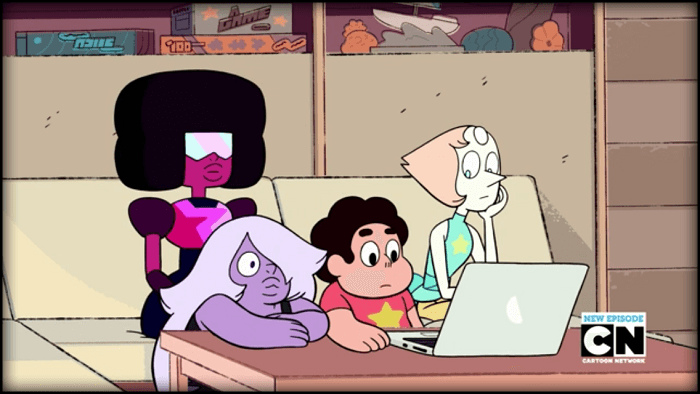 I’ve heard tell in the fandom that Ronaldo creates a very stark division between people and it’s easy to see why; while his dogged determination appeals to a Pearl like myself, it’s also what makes him obnoxious. That being said, I think that’s the point of his character and it’s what makes the very last moment of the episode, when Steven “likes” the video for what seems like an awful, cheap documentary, so sweet. Rather than dismissing the film as trash (and that’s all you could really argue against it since Ronaldo does repent his bias against the Gems in the end), viewers are shown that supporting what someone else is passionate about, even a little bit, makes a difference. 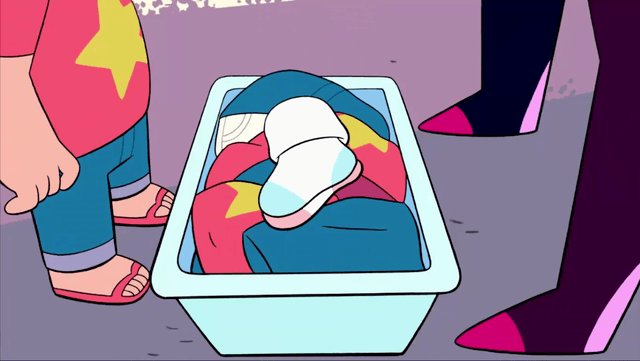 [divider type=”space_thin”]
“Keeping it Together”

Returning to the theme of relationships, it’s amazing how many portrayals of all kinds tend to equate “healthy” relationships with “perfect” ones. Even Garnet seems embarrassed at the very end, telling Steven she wished he hadn’t seen the fight between Ruby and Sapphire. Yet what I loved about this episode was watching two entities who care about each other very much encounter an obstacle and overcome it together rather than just breezing by it, though not solving the problem in one of those strange “everybody spontaneously starts giggling” ways. By “still existing” regardless if Ruby and Sapphire are fused, Garnet stands in for the understanding that strong bonds don’t just dissipate because of distance. Lastly, this episode also points out the fact that sometimes relationships need help from an outside source who can see beyond the perspective of the two involved. 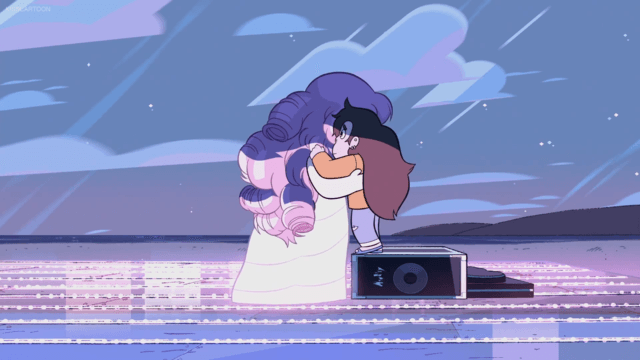 [divider type=”space_thin”]
“We Need To Talk”

Perhaps the most personally touching of the episodes for me, I feel like it’s hard not to read Rose and Greg’s conversation as a representation of interracial/intercultural relationships and how sometimes differences do cause clashes and misunderstandings at a core level. So saying, because my sister and I are both Blasian (she’s Filipino and I’m Vietnamese) I can’t help but also point out the painful though necessary moment at the very end when Greg refers to Connie as a human but not Steven. As a mixed kid growing up I rarely saw my experience mirrored in media, so to watch a slip like that (which actually happens all the time between different family members and the word “they”) makes me know that there are other mixed children who are able to feel validated in this hurt rather than alone. 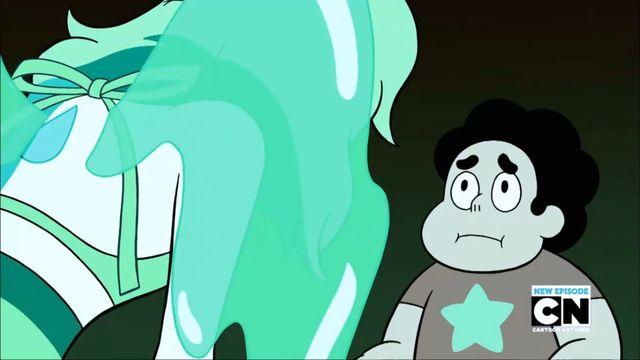 Like an echo to the first episode in this week (with a literal repetition of the phrase “just let me do this for you”), “Chille Tid” demonstrates that no matter how much you care, you can’t always save someone, especially if they don’t want the help. In some ways, I think Lapis’ position of fighting against Jasper as the fusion Malachite parallels many people’s struggles with mental illness and/or abusive relationships as well. Too often we’re taught as a culture to jump in and act as heroes without centering the survivor and asking what they want. What’s important is that while his tactics change to accommodate his friend, Steven’s support continues.

Although Steven Universe is highly creative, fun, and original, I hope that the Crewniverse continues to add these life lessons in their special non-preachy way. For now, my little sister and kids like her may just feel entertained, but I can rest easy knowing they’re secretly being equipped to become better humans, even if it’s just for 10 minutes at a time.