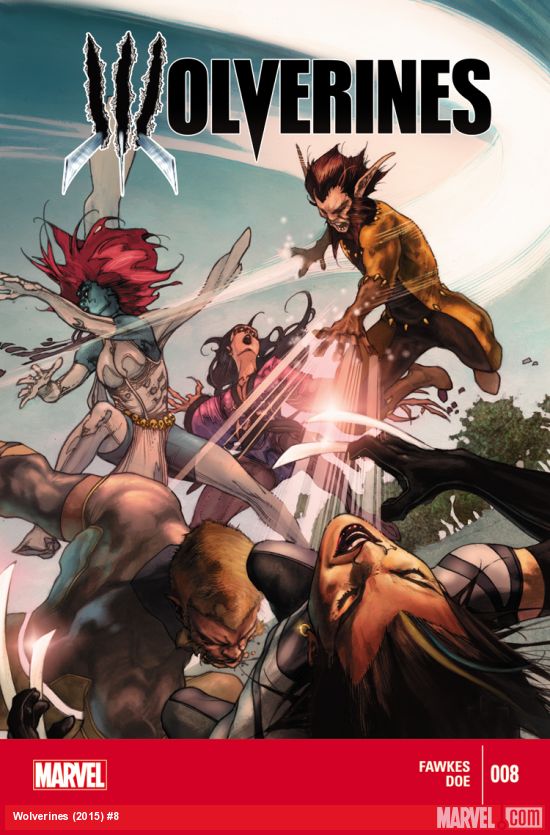 Resisting the urge to bash this issue, I’ll just call it what it is: complete filler. And the discouraging part is we don’t even know the plot it’s filling anymore. Wolverines is about the aftermath of Logan’s death, the hunt for his corpse, and two teams’ quests—the Paradise team fights for survival as they race against a kill clock, and the Wolverines fight for their freedom as they were taken captive by Paradise and forced to help them. Well, Wolverine’s corpse is with the X-Men, the kill clock was set to eternity, and the Wolverines seem pretty okay with their new family. Somewhere, a story arc was lost.

Wolverines #8 starts with the team looking up at an imposing figure:

“One of you killed Logan. One of you has to die.”

Except none of them killed Logan, so the whole issue is their trying to explain that to Logan’s old intergalactic pal Fang as they fight him. It’s the lighthearted “We have a funny misunderstanding” issue that’s not really funny, full of hacky jokes and nothing that progresses the plot. Instead of an issue that moves the story even slightly, we get an inconsequential character and panels of him punching X-23 in the foot.


[divider type=”space_thin”]
There’s nothing left to review in this issue because nothing else happens. It’s an action-packed issue full of nothing, like that person in your office meeting who talks a lot without saying a single useful thing. We leave off with Fang still in the picture and having taken Daken, who is the Jerry Gergich of this series. Sinister ripped his arm off and gouged his eye out in issue #1, he’s spent most of the series being taken care of, and now he’s being kidnapped from his own kidnappers to fight an ice giant, all while the rest of the Parks & Rec team collectively groan.
[divider type=”space_thin”]
At the launch of the series I was worried that it being a weekly would severely hurt its potential, but that worry had been forgotten until now. Most issues have managed to stay interesting while remaining relevant enough for the weekly release to be warranted. Consider the doubt to have returned, stronger and more worrisome than ever, as readers begin to wonder if they’re wasting their money on a plot that completely abandons any progression or sense of urgency. Hopefully Wolverines #9 moves back on track, but judging by this ending, I understand if you’re doubtful.