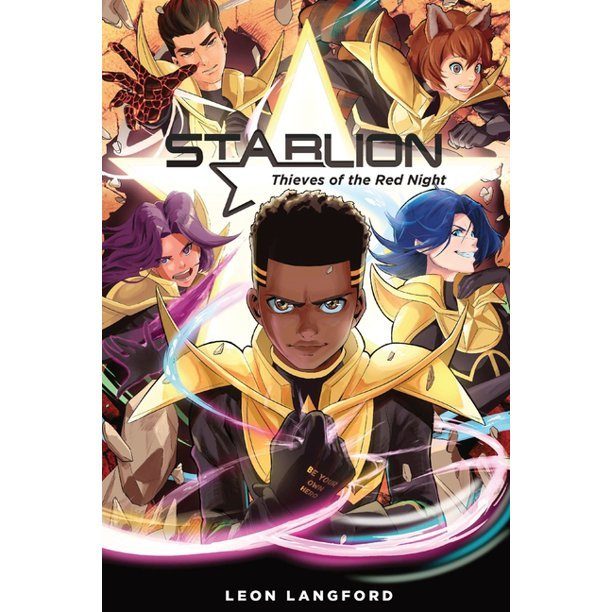 *Writer’s Note: The contributor of this piece knows the book’s author but is committed to giving a fair and honest book review. Because in this economy, ain’t nobody got time (or money) for anything less.

Buffy. The Charmed Ones. The little wizard boy written by that transphobic British lady. Who doesn’t love a good “Chosen One” story? You know the ones where an average Joe or Jane discovers that they’re actually a superpowered do-gooder destined to save the world? The trope of the reluctant hero struggling to juggle their new responsibilities with the mundane life they took for granted is well worn territory. But what happens when our underdog hero isn’t reluctant or chosen, but embraces their role with confidence, hard work, and unabashed Blackness? That’s what screenwriter and author Leon Langford (Hot Seat, Kontaxt) delves into with his debut YA novel StarLion: Thieves of The Red Night.

A City in Crisis

Released in 2021, StarLion: Thieves of the Red Night follows the exploits of 14-year-old Jordan Harris, a Black American 8th grader living in an alternate version of Houston, TX. In this world superheroes exist thanks to some humans being imbued with a bit more “stardust” than the average person (we’re all made up of the stuff actually). Jordan has the gift of gravity manipulation. He can take invisible graviton particles (a real concept) and can manipulate them for a wide range of feats, from running alongside tall buildings, creating concussive blasts, and more.

In this world, supes aren’t only enhanced humans, but they are revenue generators a la Homelander and The Seven team on Amazon’s anti-hero franchise The Boys. Like those employed by Vaught International, the major players in Langford’s universe also have toy lines, brand deals, and all the celebrity trappings a capitalistic society has to offer. But in StarLion, supes are united a shared banner much different that good ol’ American greenbacks. They’re united by collective trauma and grief.

Ten years prior to the start of the story, a villain of unimaginable power overwhelmed Houston in a cataclysmic event dubbed “The Green Night.” The epic battle royale left multiple heroes and hundreds of average Houstonians dead, including Jordan’s parents. Now raised by his older sister Khadijah, Jordan channels his grief by fighting crime as Houston’s version of a friendly, neighborhood Spiderman. But in the restrictive new world order that followed “The Green Night,” bureaucracy reigns supreme and vigilantism is a criminal offense. For Jordan, that means hiding the extent of his powers while simultaneously fighting crime in secret defiance of his sister.

Unlike Jordan, some of the superpowered choose to live ordinary lives, while others use their powers for villainy. Then there are those who attend special academies to become licensed heroes. Think X-Men meets Hogwarts, with just a tiny pinch of Euphoria (minus the drugs). When Jordan’s vigilantism catches up with him, he’s made an offer he can’t refuse: Go to jail or infiltrate one of these academies to root out an evil plot whose roots go far deeper than Jordan’s handlers realize. It’s life and death stakes on a grand scale, amplified by the most dangerous environment imaginable. High school.

Despite being a sci-fi coming of age tale, StarLion shines brightest when looking into the machinations of a non-traditional Black family in crisis. Jordan is a teenager testing his limits while coping with a unique set of identity issues. Meanwhile, his sister Khadijah navigates life as a young woman forced into a sort of single motherhood. Khadijah’s job as a cop further stokes her fears over Jordan encountering police, mimicking similar fears Black mothers have in real life. That stress is compounded by the earthshaking family secrets she’s been forced to carry as the head of their household. Author Leon Langford does a thoughtful, if all too brief, look into how this grieving family holds it together in a world drowned in chaos. These dynamics will undoubtedly be explored further down in the StarLion series as Langford builds upon the story’s emotional center.

A Distraction or Two

However, while StarLion embraces the idea of being special without being “chosen,” it contradicts itself with an overreliance on familial legacy for supporting characters. The story repeatedly reminds us which students are related to academy staff or descended from the “gods” of ancient civilizations. After a while, the endless references to Zeus and the Greek Olympians becomes repetitive, especially in a book where the main protagonist is Black American. Even Jordan suffers a bit from these contradictions but thankfully not by much.

Another misstep in StarLion lies not in its prose, but in its audiobook currently on Audible. Voiced by actor VonDexter Montegut II, the Audible version is an equally, if not more exciting read than the standard book thanks to Montegut’s nuanced portrayal of Jordan. But there are a handful of technical errors where a sentence may be repeated, or a revised take is played after the original one. These errors in editing are few but noticeable. Hopefully, they will be corrected with updates to the audiobook and/or as the series progresses with future books.

But despite its few missteps, StarLion still has plenty of achievements. Its examination of systemic racism, privilege, and genocide through the lens of non-traditional heroes is both clever and heartbreaking. Considering the real life whitewashing of basic history in our own reality, these undercover lessons in StarLion couldn’t be more relevant.

Finally, Langford manages to introduce his StarLion world with a level of writing that is both age appropriate and sharp. He doesn’t talk down to the primary 14-year-old+ audience, and the book manages to tackle other relevant social issues in a ways that are easily digestible for readers of all ages, without beating the reader over the head.

StarLion: Thieves of the Red Night is a delightful, fun, and at times emotional read and an excellent entry into what is sure to be an exciting book series. With his debut novel, writer Leon Langford crafts a lead protagonist who is exciting, flawed, and inspiring. It’s an excellent summertime read for young teens and adults alike.