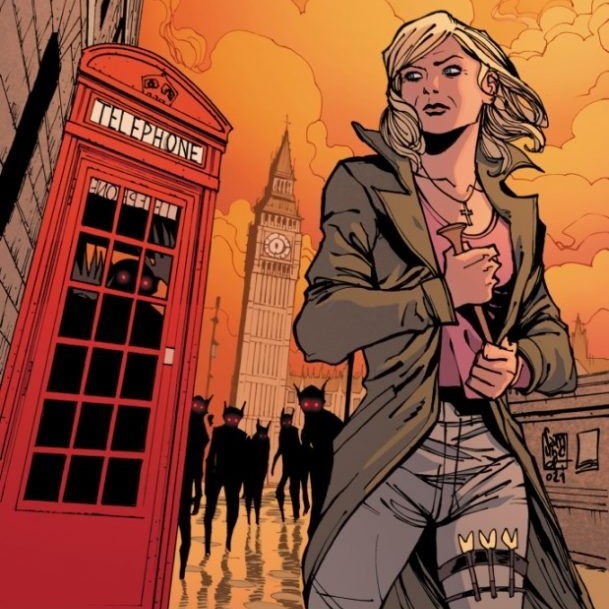 Last week we reviewed Buffy the Last Vampire Slayer, and this week Casey Gilly, the writer, and Joe Jaro, the artist, were kind enough to sit down with us and talk about what it takes to make a dark, alternative future for a beloved franchise.

Black Nerd Problems: So today, we get to talk about Buffy the Last Vampire Slayer, which is such a fun sentence. Where did the idea of doing a dark future Buffy comic come from?

Casey Gilly: Well, it was a combination of Elizabeth Brei, the editor, and myself. Elizabeth and I had previously worked together, and we really liked each other. She reached out to me and said, “Hey, we have this skeleton of an idea for an older Buffy who is dealing with some kind of an apocalypse. Do you want to take a crack at it?” And I sure did. So, there was a prompt, which, by the way, if any publishers or editors are reading this or listening to it, that is incredibly helpful for writers, to give us a little bit of a direction. And it just turned into what it is now.

BNP: Given how many iterations of Buffy have existed between the movie, the series, the original comic, and the rebooted comic, what were the challenges of approaching this new, alternate-reality Buffy?

Casey: I would say that my challenge is I am the demographic who grew up with Buffy. I’m in my forties. And I love the show, it will always have a very special place in my heart, and I do think that the fans of Buffy who have been there from the drop might ask themselves, “Why would I want to read a 20-year-old superhero? Why would I want to read somebody who’s a teenager? Why would I want Buffy to stay at this age?” And the way that I challenged myself was, “How can I keep her familiar and relatable and authentic to who she was then versus who she is now in a way where people won’t have to question, ‘Is this Buffy that I knew?'” In a lot of ways, it’s not. But I think that the whole team working on it has done a great job making sure that everything makes sense, that it feels like something that would be part of Buffy’s life, even the things that are maybe a little bit shocking or sad that you’ll see in future issues. I try to treat this very respectfully, because these characters are not mine. I get to play with them for four issues, and I’m really grateful that I do. I don’t think that writers should engage in fan service, but I think that you should engage in character authenticity. So that’s something that I truly challenge myself with every single issue.

BNP: To that point, out of all of the iconic elements that are associated with these characters, what were the key things you really wanted to preserve with old Buffy and the ones that you wanted to transform?

Casey: Joe, do you want to go first?

Joe Jaro: With older Buffy, I tried to make her familiar. You know that pulled back with the low ponytail. I tried to keep it grounded into that, just adding into what I think she would look as an older Slayer. Yeah, that’s pretty much it.

Casey: Joe, I love that you mentioned the low ponytail, because changing-

Joe: It’s her, right? It’s Buffy! Whatever hairstyle she has, her default is the low ponytail.

Casey: Something I really wanted to help transform was a lot of the styling choices made on the show that I would not have made. I think that our Buffy and friends dress way better. We’re not doing anyone dirty. We’re not putting anybody in weird, multi-braided hairdos. There are no corsets for no reason. And I love that that makes the show feel like it does, but that was one of the first things where I was like, “Mm-mm, not on my watch.”

Casey: The other thing that I was really excited to transform was this ingénue that Buffy had been. Even though she was tough and gritty and did what had to be done, there was always this heroicism and pureness in Buffy that I do not think is a sustainable quality in a Slayer. They are not meant to live forever. They are not meant to even really have long life spans. Buffy is the oldest that I think has ever existed and still been active, and I was so thrilled to transform her into somebody who grew and earned a critique of being a Chosen One.

BNP: Part of the premise of this comic is that vampires and humans have this tenuous societal thing going on, which is like, “We’re not gonna not eat you, but not gonna be so up-front about it.” And one of the interesting things about vampires is that they’re a metaphor for about a dozen different things. Particularly interesting is in the past two years, they’ve been a metaphor for death and disease. So, what’s it like writing a vampire story in the haze that has been 2020 and 2021?

Casey: I approach my vampires as a symbol of capitalism.

Casey: In a lot of ways, I thought about the consensual drain that we all take part in and what it’s like to have it be marketed, and made cute, and made funny, and integrated into our daily lives in this very insidious way. I am obsessed with vampire movies. I went and saw Lost Boys at a very young age without an adult knowing about it. They are such a formative part of me being a writer. And going into this catastrophe on Earth, we have to assimilate, there are people who take advantage and profited off of what happened to us in the last couple of years, and that was definitely what I fed into these vampires.

BNP: Alright, time’s running out. Just fire from the hip, favorite episode of the original series.

Joe: “Hush.” I love that one. I thought it had a great combo of action, horror, comedy. Definitely had a lot of comedy in it, for what it was.

Casey: “Tabula Rasa.” I think it’s a really great character arc that was pretty natural but still unexpected, and I would say that that’s an episode I definitely reference in writing this comic, is some of the things that happened in there, and the consequences of them. “Hush” is an amazing episode.

Joe: It scared me. Even as a young adult, I was like, “Ahh, that’s kinda creepy!” (laughs)

Casey: And I love every Halloween episode.

BNP: What do you hope that readers experience after they’re done reading the first issue? What’s the takeaway that you hope that they have at the end?

Joe: For Buffy, with any…there’s definitely purists out there, who…the fandom is very fickle. But I would hope that no matter how staunched of a fan you are of Buffy, they can dive into this more like, “Yeah, you know what? Maybe if things did happen differently, this is what would happen.” And I think Casey did a great job of grounding it into the lore, even though it is an elseworld story.

Casey: I hope that they are so charmed and annoyed and curious about her that they can’t wait to read what’s next.

BNP: I ask this question to everyone I interview, but what’s a piece of media you wish more people knew about? Not your favorite, or the most popular, but one you wish had more eyes on.

Casey: I have an answer, Joe, if you need a minute to think.

Casey: So, there is this Instagram account that I’m obsessed with called Rexy Studio, and they do puppets. They do just such cool work, I highly advise you all, go check it out. I’m not affiliated with them at all, but, rexy_studio on Instagram. They have a snake puppet that sings. Please go watch it, it’s so cool. I wish that they would blow up so that they can make more and more and more, just for me personally.

Mikkel: I have followed as we have been talking, and oh my god, the snake.

Casey: Okay, there’s a “Berries and Cream” song, if you all remember that Starburst commercial if you’re old like me. Mikkel, find it, it’s maybe 15 videos back.

Casey: My four-year-old is obsessed with it. The puppetry is so good.

Joe: Just real quick, I am not too proud to beg: me! Follow me.