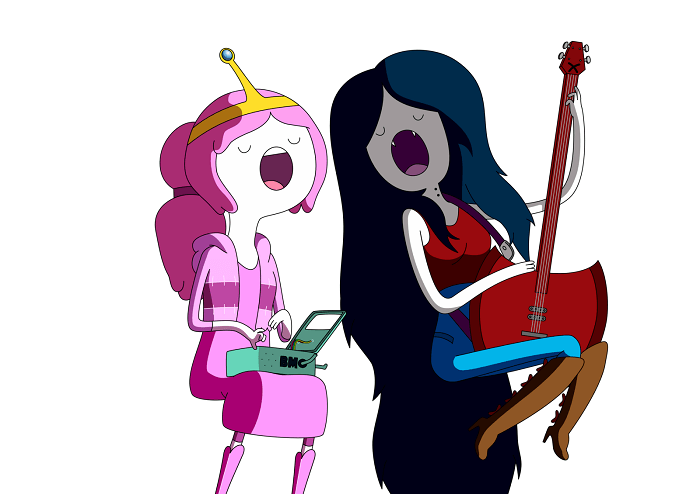 Now that we’ve gotten all that out the way, here are 5 very important female friendships in cartoons that you should pay attention to. The Crystal Gems are humanoid beings that go on adventures and happen to sometimes bring along a kid named Steven who is the son of their former comrade Rose-Quartz. I love this show and these ladies are a large part of that reason. Besides the point that these ladies are a labor of love by being cast on a show that is creator Rebecca Sugar’s first — Steven Universe is also Cartoon Network’s first show with a solo female creator.

The Crystal Gems are:

Pearl is the voice of reason within the Crystal Gems. She is the master of order and structure, and sometimes loses it when things go off the rails, which is often.  She has an arsenal of several staff-like weapons and summons them from the gem on her forehead. The best way to describe her and her fighting style would be Samurai-meets-Ballerina.

Amethyst is Crystal Gem’s resident wild child. Her weapon is a whip that she pulls out of her gem, which is located on her chest. She loves being unconventional, loud, and over the top. Because of this she often clashes with Pearl. She’s messy in more ways than one, in both her organizing skills and how she deals with most situations.

Garnet is Crystal Gem of few words. Her weapons are gloves that materialize on her hands when activated by the gems on her palms. She stands the tallest out of the three and can be seen as intimidating to some.  She’s the most level headed out of the trio and is admired for her leadership skills by both Pearl and Amethyst. 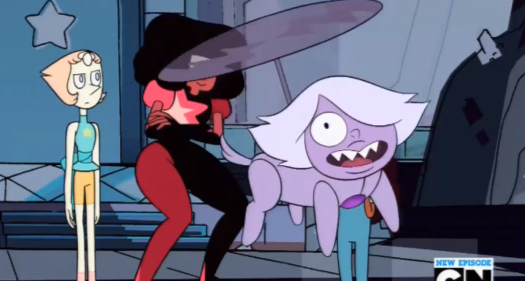 Princess BP and Marcy go back. WAY BACK.  The Princess who is at least several centuries old (Yes, Finn — she was lying about her age… don’t be rude, bruh) has forged a friendship that has had its ups and downs with the over-a-millennial-old Marceline.

Princess Bubblegum is the ruler of the Candy Kingdom whose love of science sometimes leads her down dark paths. Marcy is the wild child who loves playing the bass, and her playful nature can get out of control sometimes and be down right scary. BONUS: They apparently have  loads of fun together in the Marceline and The Scream Queens comic. HOLLA. Marcy and LSP never really had any gal time together… and my God, they had a field day together doing all types of malarkey in the more recent Adventure Time episode titled, “Princess Day.”   They do everything from vandalizing a castle to kidnapping a snotty Princess to grand theft auto. An episode not to be missed! “It’s all right. People usually assume that I’m daddy’s helpless little girl, but I can handle myself.”— Asami

Korra is our most recent reincarnation of the Avatar: she’s fierce, brown skinned, and a bit muscular. She’s also outspoken, brave, and everything I love (an attitude shared by most of us here at Black Nerd Problems) and everything dudebros seems to hate.  Asami Da Fictional Bae, as Will has nicknamed her, is also a force to be reckoned with: she was trained in serious hand-to-hand combat and is able to operate everything from automobiles to airships. She’s also the only character in the show to come close to a Beyonce-like hair flip.  These two came a long way, because they used to date the same dude, at different times but — long story. Ugh, yes, that guy, Mako. But Asami is no damsel in distress and she’s a valued member of Team Avatar. And Korra — well, she’s a beast. She’s the Avatar — master of all four elements, and then some. Together they go out into the world and eff things up, Step Brothers-style. These two do almost everything together…

…Go on drives (Asami actually taught Korra how to drive)… …survive the crashing of airships in more or less one piece… …and help the other relieve some stress. And ya girls are capable of mass carnage. Asami out here just destroying dudes with the Nintendo gloves (or the Kakashi Promoted Chidori glove as Omar got us hip to). And Korra? Pretty sure some of those Red Lotus guards crapped their pants in sheer terror when they saw her unleash fury in that season finale. If you’re a late fan to the series, yes, you heard that correctly: Beifong. As in Toph Beifong, the greatest earth bender on the planet. Well famillar with Lin since season one of Korra, we were introduced to the other daughter of Toph Beifong a lot later in the series. The formerly estranged half sisters made up and with teamwork, and had hands down had one of the best HEADSHOTS in a TV-Y7 show so far. Both of these women were destined for greatness. With the metal bending taught by their mother, Lin went on to become the Chief of Police that Republic City needed, handing out that tough love via metal bending cables, and Su finally settled down from a rather colorful youth and helped found the first Metal city, Zaofu.

That Beifong Academy got people performing on this level:

But in all seriousness, it is imperative that women are not only represented positively, but that women are also shown having support systems and female companionship. Male characters have Bromances and women characters deserve the same. Girls need to see themselves on screen and girls most definitely need to see female characters interacting with other female characters in a positive way. The female characters in these animated shows feature women with several different body types, women with interests that girls are usually pushed not to take up (SCIENCE! SLAPPING THAT BASS!),  women of color, women in positions of power, and some real fierce villains (…er,  villianesses? Yup, villianesses. Had to Google it to be sure).

Several, if not all of the gals mentioned are well written and multi-dimensional characters. While you may not like or be  familiar with all the characters included on this post, one thing is for sure: they’ve made a big enough impact to be noticed. Let that Girl Power flag fly victoriously in the wind, and anyone who disagrees can just get one of these: