At first blush, A Clear Shot, written and directed by Nick Leisure, is a straightforward hostage thriller. A group of men with guns will storm the lobby, fire into the air, yell for everyone to get down. What follows are terse and quick-witted conversations between robbers and the hostage negotiator in a psychological battle to get what both sides want. The hostage negotiator will repeatedly say that he doesn’t want anyone to get hurt, to which the robbers reiterate their demands. Hostages themselves negotiate whether to “do something” by way of intervening or wait for their hopeful rescue. A power struggle wages in the parking lot between the negotiator, S.W.A.T., and the “brass,” edging the negotiator closer to going rogue. You have seen that story before, if not many times, on major network television crime dramas and movies. Where you might hope A Clear Shot is a bait-and-switch, a Trojan horse that appears to be a generic heist that comes with a twist a lá Inside Man, you should know from the onset that A Clear Shot is not that movie. Your first impression is to be trusted, which isn’t to say A Clear Shot is a bad movie, but one for which your expectations should be accurately calibrated for you to enjoy. 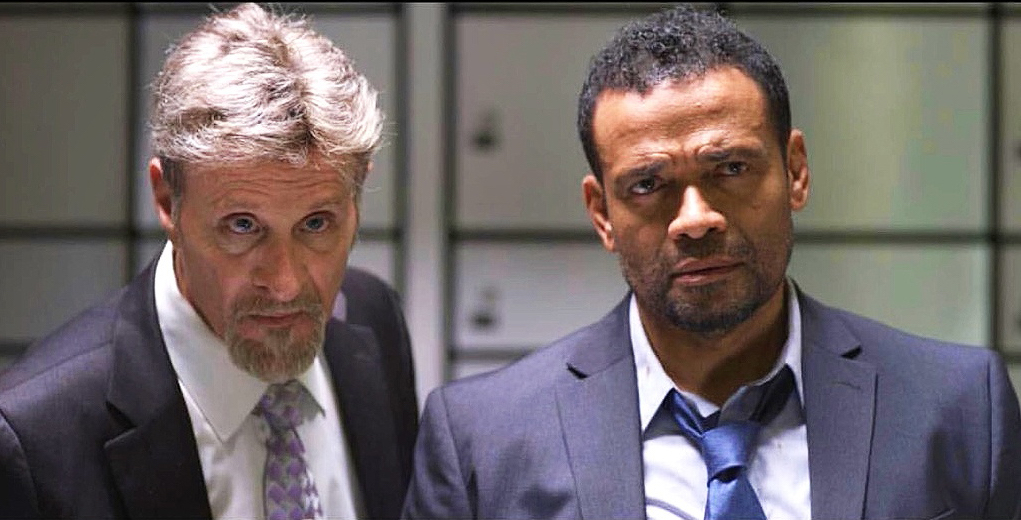 Starring Mario Van Peebles as hostage negotiator Detective Gomez, A Clear Shot is inspired by a true story of 1991 holdup by young Thai immigrants. The four boys range from a volatile hot-head who wants to earn his respect through violence to a crying, shaking member of the group holding a gun for the first time. It’s clear from the onset that these are not what you would consider smart criminals, but desperate idiots, as robbers demand millions of dollars, a helicopter to fly them to Thailand, and full body armor “like Robo-Cop” for their escape. Police recognize the type of robbers they’re dealing with, making for a precarious situation: it’s less about whether the robbers will get what they want and more about whether the conflict can end with no one physically harmed. The only thing more dangerous than smart robbers with guns are dumb ones, and this cannot be overstated, the gunmen here are portrayed as extremely young and stupid.

Hostages include store employees and a handful of shoppers, 15 hostages total not including the unborn baby of a pregnant mother. While most of the hostages are mute and nameless, a few of them hold an ongoing conversation for the audience to mentally role-play along, debating how to handle the situation against gunmen so clearly in over their heads. One of the hostages is a store employee played by Mandela Van Peebles, Mario Van Peebles’ son, playing the role of pacifist against a growing consensus from other hostages that they should attack the gunmen instead of waiting to die. Of the ones in favor of bum-rushing the gunmen, none are more badass than an old man who has faced death before in war and says the things we all wish we could say in a crisis, and as confidently. 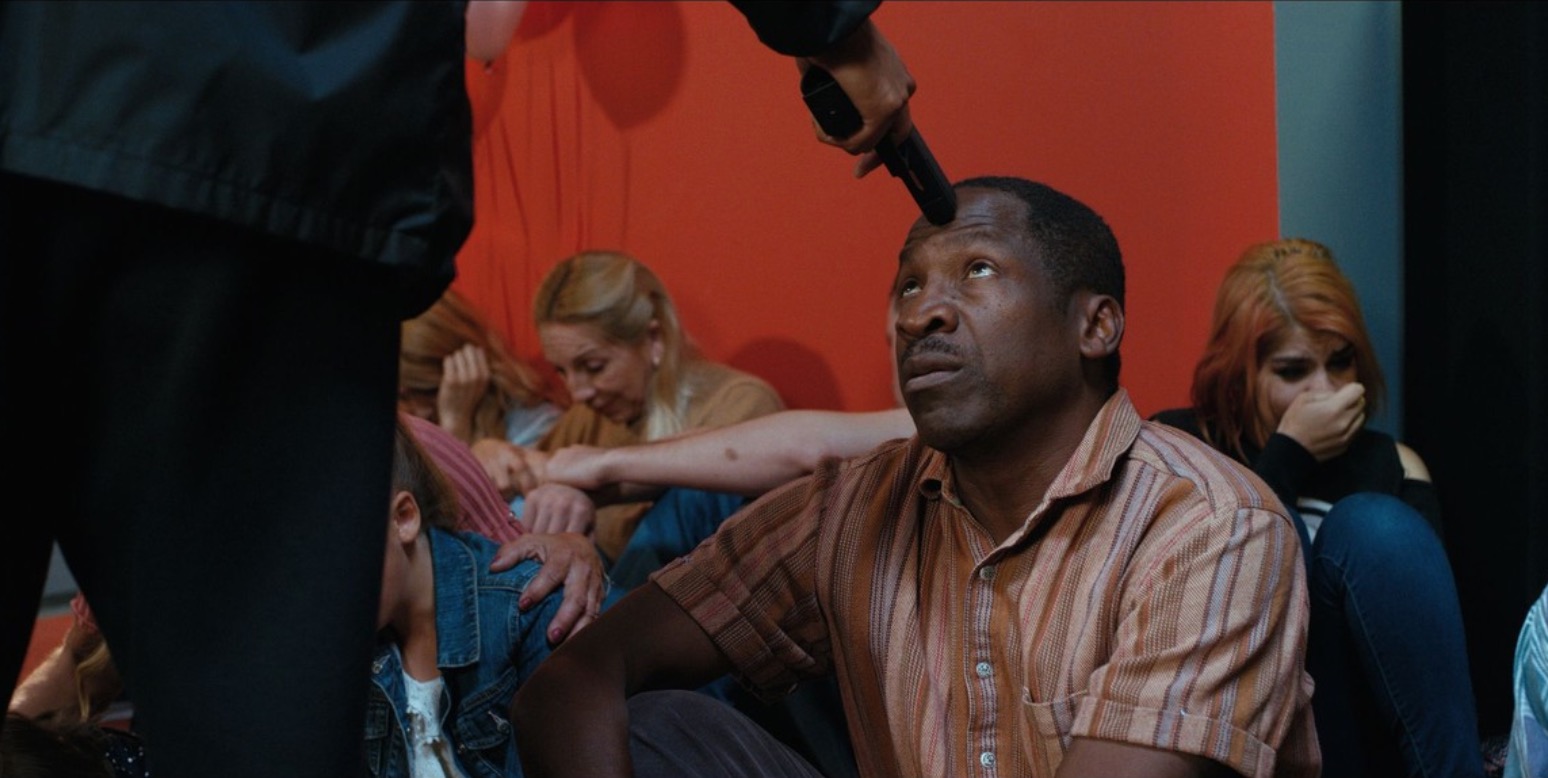 Outside the store are most of the clichés you could imagine, beginning with Detective Gomez himself who shows up with large sunglasses on a cloudy day, unshaven and tie loosened, a secret flask in his coat pocket for when he needs a drink. If you can forgive the clichés, you may be pushed beyond your breaking point with an inexplicable romance that brews under the surface of the conflict between Detective Gomez and an on-site woman police officer.

While the film is low-budget, it’s rarely a distraction. Little is needed to tell the story A Clear Shot is trying to tell, and so little is used. But between the cliché dialogue, witless criminals, and ham-fisted romance, you will likely find yourself asking what the film is aiming for at all. My best answer comes from a running theme throughout Detective Gomez’s negotiations: he’s Black and Mexican and has struggled in this country the same way the desperate gunmen have. We are given brief glimpses into the lives of the gunmen and how they have struggled, showing how they feel abandoned and unwelcome in their new country. The result is desperation, that sometimes desperation leads to this, and only someone who relates can best mitigate the damage of those whose desperation manifest in destructive ways. 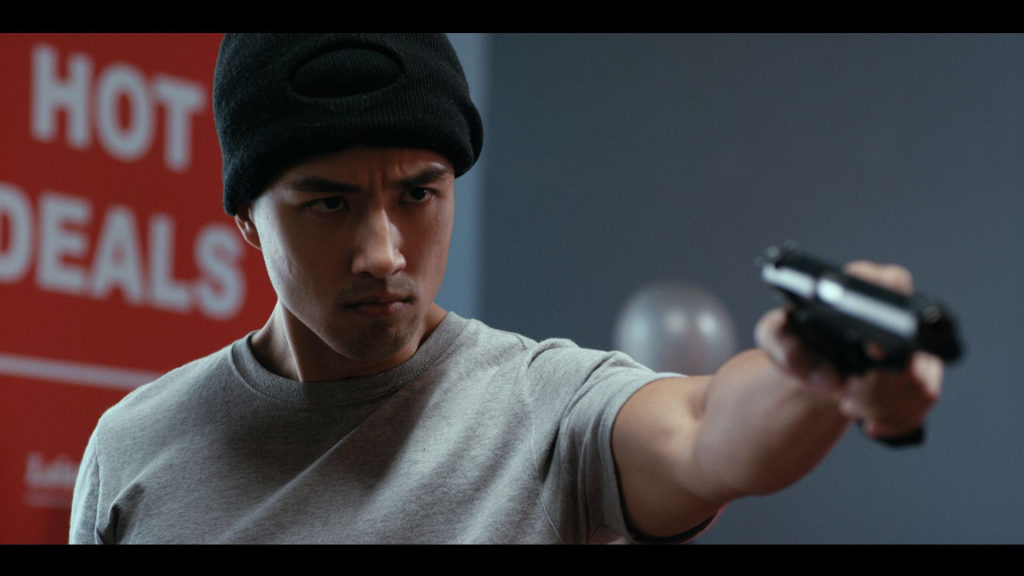 This may be giving A Clear Shot more credit than it deserves, if its action-star movie poster is any indication. Still, if you want an easy, paint-by-the-numbers hostage thriller to watch with your popcorn, there are worse options. For my time and money though, there are better options than an elongated episode of a cancelled CBS pilot.

A Clear Shot is now available for streaming on demand.