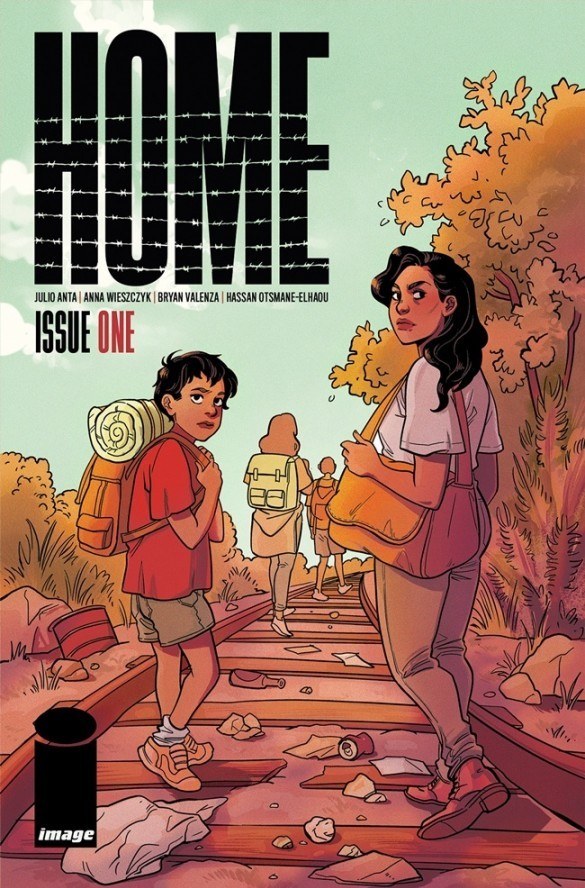 Don’t stop me even if you’ve heard this one before, but I just read a comic that examines the ramifications of a migrant having superpowers. It’s a sentiment that has oft been repeated in the media, none more iconic that Superman himself. That being said, that premise certainly takes on a very different light and context in 2021, especially given the context of the last half decade. Home is Julio Anta’s attempt to paint an accurate picture of the world, while also allowing for just enough escapism to be optimistic.

For the vast majority of Home, it is a very grounded and unfortunately very familiar depiction of news headlines we became accustomed to. Families put in cages and kids separated from their parents. And Anta’s narration alongside Wieszczyk’s artwork paint a very heart-wrenching picture. It a goddamn near dystopian book that hurts all that much more due to the fact that a lot of the text is essentially ripped from the headlines. Anta’s juxtaposed the politically laden rhetoric alongside Mercedes and Juan Gomez sympathetically just struggling to survive the hard travel conditions.

Wieszczyk draws these characters with such care and kindness and manages to very effectively convey the poor conditions the duo endured. They really help bring Anta’s allegory to life and make for a compelling story even before the fantastical elements.

We don’t get the inklings of the book’s superhero until the very end of the issue, which is fair given the limited series’ five issue run time. But you very much feel drawn into the story, and the added wrinkle in the last act will definitely hook you.

Home very much feels like a specific byproduct of the last few years. It is a comic that captures a very horrific part of modern history and does so with intent. Juan is another entry into a pantheon of asylum seekers with superpowers, and the fact remains that even though his story is just starting, we see the recurring trends of othering, of needing to be more, of just desperately wanting sanctuary, and being denied it. It’s a solid start, and I’m interested in seeing how it approaches both the human and superhuman aspects of the narrative.