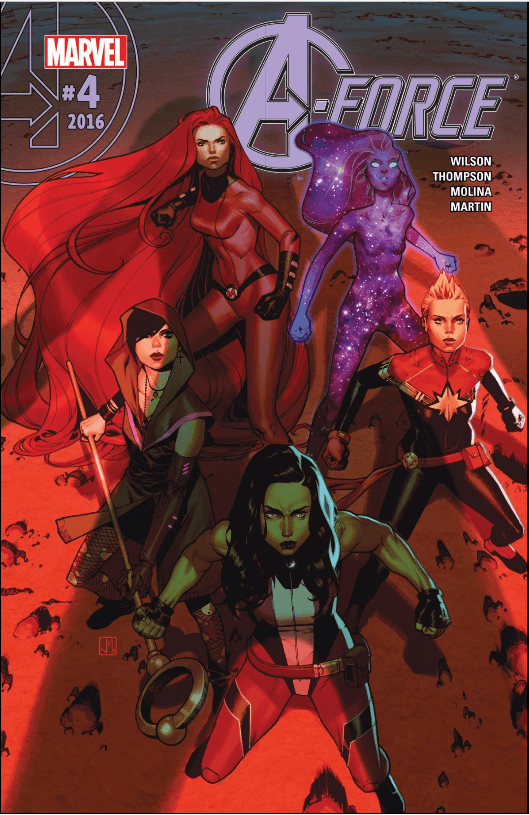 When we left Singularity, she was fighting Antimatter in the blue area of the moon, like any good superhero does. And she was losing, which isn’t usually how things go. Meanwhile, the rest of the team is trying to get themselves together with the help of the local scientist, Dr. Bell. 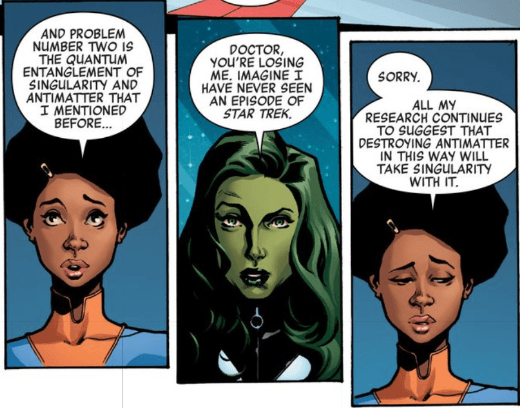 What is already apparent is that A-Force (though they don’t yet have that name) is a true team, no member could solve all of the problems on their own. Which just makes their constant banter more entertaining — while they are arguing, you know there is nowhere else they’d rather be. They also make time to occasionally pose dramatically. There are no less than 5 shots in the first half of the issue that feature better cover poses than most other comics out today, which is to say that Molina is a master of this art, establishing panels only to tilt them, slide them, then abandon them like a stolen car. Combined with the power couple of Thompson and Wilson, they know when to lay it on, and when to let it go silent.

Now the surprise is that the team settles this whole Antimatter issue by the time you get to the staples in the middle of the comic. (Yes, I read physical comics. I also write these reviews out long hand. Shut up.) The after-action meal is now a Marvel cliche. Having shared these kinds of meals with teams of all kinds, they always ring true for me. After so much physical exertion, there’s a certain amount of emotional overflowing that happens, and this team is no different. We already know that no one writes the vulnerable female hero like Wilson, and she brings that skill set to all of the women of A-Force: 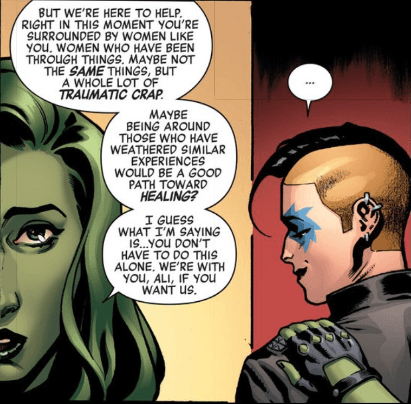 After this issue, Wilson steps back, as do Molina and Martin, leaving Thompson and Ben Caldwell in charge. I’m not worried about Thompson, she’ll take this comic in a great direction, but I’m so in love with the Molina-Martin combo that Caldwell and colorist Ian Herring are really going to have to woo me. It’ll be a new look, but if the preview covers are any indication, we’ll be fine.

For this arc though, there’s no doubt this creative team is at the top of their game. The action-to-dialog balance was perfect and the emotional tenor was strong. This is pretty much everything you could ask for in a superhero comic. My recommendation is that you should buy two, one for you and one for your best girlfriend.

9 Singularity smiles out of 10