Hey y’all! Another entry in A Nerd Girl’s Adventure for your pleasure! Last time around Leslie chronicled her adventures with Outdoor Afro so I figured I’d express just how much I love the California Science Center. I was a kid when this place first opened its doors and I make sure to try to visit once a year because there’s always something great and innovative coming.

I know Los Angeles and SoCal as a whole is known for its entertainment landscapes (I always have out of town and out of state relatives who want to see the Hollywood Walk of Fame- minus Donald Trump’s star) which can include the many museums out here but I gotta say you’re missing out if you don’t check for places such as this. First opening October 15th, this unique offering boasts 12,000 sq. ft of interactive elements about all the ends of outs pertaining to all the math and science that helped in the creations of the Pixar Films. I had a blast and had to cover it for BNP!

Noteworthy Tidbit for Accessibility: Each panel with an interactive element (something that kids can grab on to and play with) was low enough to the ground for the little ones to sit or stand at with ease. At one panel there were even step stools so they could reach. A really important feature was that wheelchair-using children and adults could also swivel to these panels with ease: this included the standard wheelchairs and motorized chairs.

I’m not sure if this was intentional to cater to autistic children but the first room of the exhibit is not brightly lit: it’s dimmed lighting with enough light placed in certain areas through the exhibit so you don’t feel like you’re stumbling in the dark. I can see how this could be useful for caustic children who need a break sensory-wise. At each section, there is re audio devices with recorded message about each topic (modeling, rendering, etc). Lastly, service dogs, wheelchair rentals and translated map inserts in languages including Spanish, Japanese and French are available. You can See other accessibility accommodations that the center provides here. 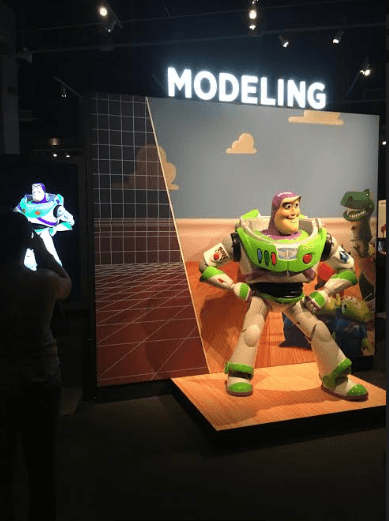 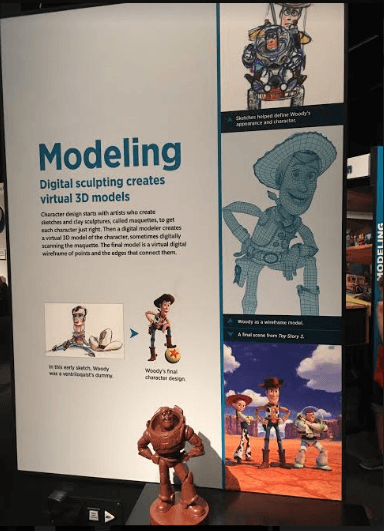 What’s NOT to be missed: A Photo Op with your favorite characters! Dory, Edna Mode and Wall-E are a few of the Pixar fan favorites that you are cozy up to and snap a photo with. Just remember the only rule for photography is similar to most museums: no flash. More than one character features two-tier inter-activeness: while someone is posing for a photo with Dory, another person could be manipulating the lighting in the background and experiment with how virtual lights enhance mood and believability. 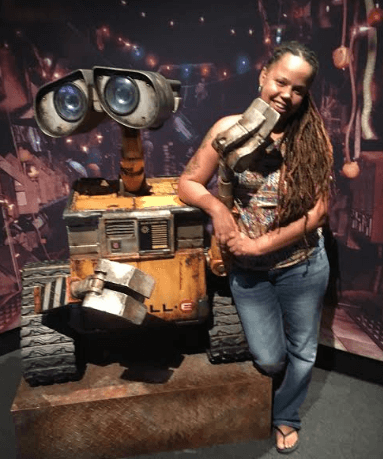 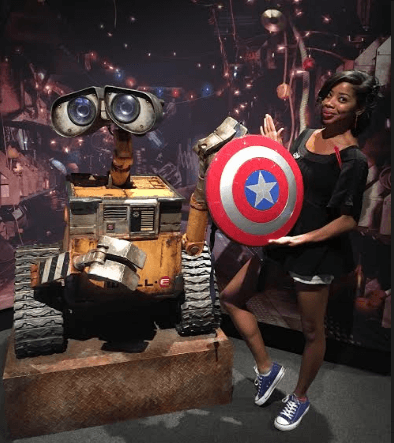 Tickets: Not bad for hour or so of learning and fun. Without the IMAX film, you pay under $15 for an adult ticket. Child (age 4-12) tickets are under $10.

Parking: Not expensive– just $12 for cars. Oversized vehicles are more. But if you’re hip to the area you can scoop out some parking on the street and nab it. OR just use a ride share app like Uber or Lyft like both my friends and I used.

Information you should know: BUY YOUR TICKETS IN ADVANCE. Buying them online is a suggestion too even if comes with a $2 processing fee. It beats going to pick them up and waiting in line. Tickets are timed so that only so many people are in the exhibit at one time so folks don’t feel crowded. You can spend as long as you want in the exhibit but once you leave you can’t return so make sure trips to the bathroom with the little ones are done and any other really important things are taken care of beforehand.

It is recommended that you allow 60 minutes to view the exhibition. You may have to wait in a short line behind some little ones (or adults–no shame, I got in on that action too) to sit at a panel and manipulate it or wait till someone is done taking a photo or too with Dory before you can get yours. You may want to double back and view a short video playing for something you missed. There’s somewhere around 50 interactive elements in this exhibit.

Skynet gave Pixar some money so you could make your own robot…? You can’t take it home and may have to fight to the death for a chance to make one #scienceofpixar

Giftshop: WARNING: The official Pixar gift shop once you leave the exhibit has NO Wall-E merch! As a big Wall-E fan, I was so disappointed and got to save money that day. Shame. I did see merch of all your favorite Pixar buddies from Buzz and Woody to the Monsters Inc. crew and beyond in the form of t-shirts, toys and backpacks. Never fear there were educational books, toys, and then some, as well as some books about Pixar’s history for the older readers. I have to mention that I saw sketching pads and even little animation kits that looked promising. For you FUNKO POP collectors there’s a small collection waiting for you that people were going through. If you’re a concerned parent or a frugal attendee needing to bring something home there was a nice little bunch of cheaper items starting with the sixty-nine cent pencils (No Wall-E, so I’m still salty) to key chains and notepads and pens with several different characters. Eating Out and other Local Places to Visit: The California Science Center has some modest dining options but if you some variety I’d suggest walking a block or two on an adventure for more. A Chipotle, Subway, California Gogi Korean Bar are just a few of the offerings nearby that can be reached on foot. The world famous Rose Garden is next door as is the California African American Museum and the National History Museum (DINOSAUR BONES Y’ALL!).

Pixar’s pipeline process from start to finish–from story and art to rendering. ✨ #scienceofpixar A video posted by @carebearsonfire on Oct 22, 2016 at 3:24pm PDT

Want an educator’s opinion? Glad you do, because I took a friend of mine who happens to be a Science teacher for middle school students in the Los Angeles area and I asked her a few questions:

Black Nerd Problems: As a science teacher, why would this place be ideal for field trips?

Salina G: Any chance for students to interact with media is ideal. Students happen to use, observe and be around different elements of media throughout the day so they are comfortable with it. Media also branches out into entertainment and it definitely has educational components. (Even if you use traditional film as an example: how many frames per second? How long is a particular sequence? What chemicals do I need to develop this film? What frames get edited out, etc?) Technology is certainly cool to kids. A Pixar film is enjoyable to kids. This exhibit gets kids thinking with questions like: “What goes into this film I love? Math and science play a part? What work goes into creating it?”

Also, I think it peaks interest into what careers go hand in hand with STEM. I remember being a child and thinking that the only careers available to those who had an interested in the sciences or math were being a doctor or working with chemicals somewhere in a laboratory. And honestly, that’s still most people’s initial thoughts about those fields. For those children entering the exhibit with a curiosity, I feel that this can help expand career horizons, help broaden what is possible and envision working a job that you love. 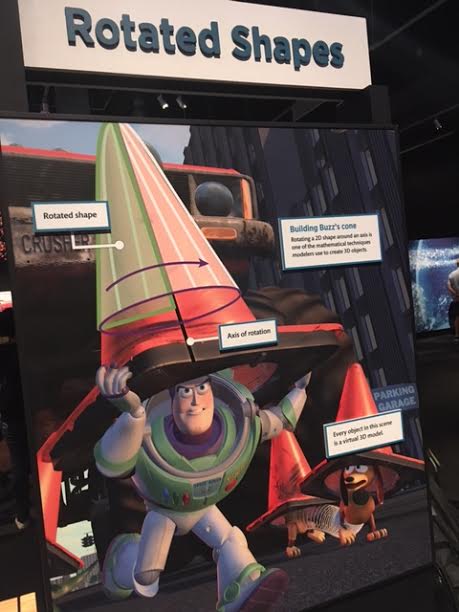 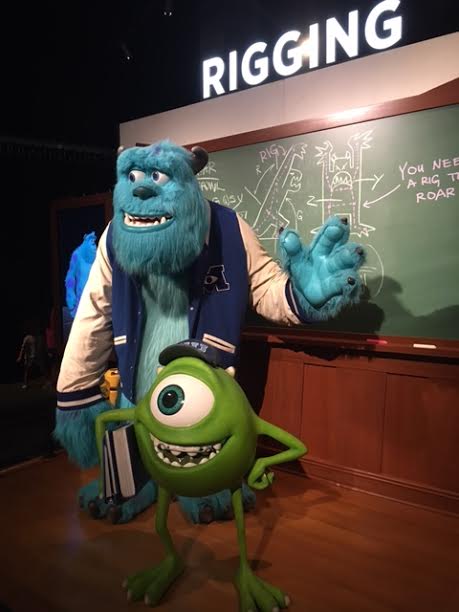 BNP: Any other thoughts on the exhibit, speaking not just as an instructor for children but also as someone who has taught some courses in higher education?

Salina G: I love the emphasis on the science! Science and Math are fundamental to everything! I really enjoyed the videos of people at Pixar detailing of what they do and for what film(s). I think we all really take for granted just how much work goes into these films and just how many technologies, engineering, and math (STEM) concepts go into them. Adjusting all the many details from eyebrows to mouth in Jessie’s (Toy Story) facial expressions to seeing how challenging mathematically stimulating Merida’s hair (Brave) were among my favorite parts of the exhibit. They really highlight important eras in the history of Pixar and help the younger attendees gain an idea of how things work behind the scenes.

Be sure to book your tickets for This exhibit is open through April 16, 2017. Need more incentive? Admission to Space Shuttle Endeavor is included when you visit The Science Behind Pixar exhibition.

Like this Nerd Girl’s Adventure? Catch up on the rest of the series! Know a place in the SoCal area that I should visit and write on in our series of “A Nerd Girl Adventures”? Drop me a line in the comments!