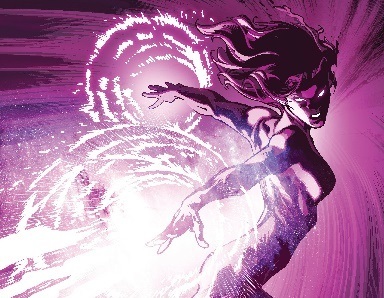 After last issue’s playful (and often serious) look at the present Beast’s conversation with the Watcher as he contemplated all the futures he may have altered, this issue we return to the story in progress as the team deals with the fallout of Jean Grey’s captivity and the departure of Original Scott Summers (Cyclops #1 coming next week, reviewed by muah by the way). The strongest element of this issue is in the very beginning, with the conversation between Jean and older (or Regular Aged) Summers. This is a relationship that could not possibly be more complex and yet it is very touching and realistic how they interact with each other. Sometimes the message is delivered in the blank space and in what isn’t said and this section does a beautiful job of that. And in case you were worried about this reaching absurd complexity levels, the resolution from Regular Aged Summers telling Jean that they can never, ever get involved is welcome, if it holds. With Kitty being so adamant about it, I imagine that it might actually stick.

The second half of the issue deals more with Laura (aka X-23) trying to leave the team. This isn’t bad, but its pretty heavily traveled ground with the loner mutant with claws and memory issues trying to sneak away from the team. Bendis is a genius, so one can only assume that when Iceman says he only new Laura as Wolverine Clone, that’s its with a wink and a nod since we’ve seen this behavior before. That is resolved in the end (sort of) as we get a tease from the new threat to the team. Though new may not be the right word for it as it SEEMS like we might get a recycled conflict, but we’ll have to wait and see.

All in all, a solid and sobering start to the next arc for this book, hoping we get something newer this time around.