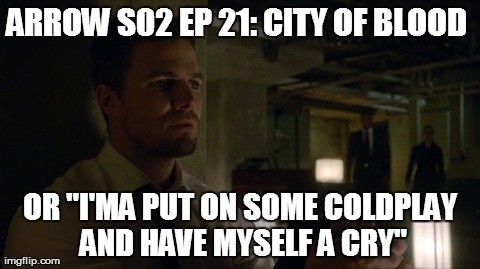 Last week we saw Slade Wilson give the Soul Calbur slice to Ollie’s Mom right in front of Ollie and Thea. He didn’t even give her the dignity of a Kenshin Himura stance either just went straight for the over kill.

So Slade done went and took out Ollie’s mom son? You take out Mom dukes?!?! naaaaaaaaaah Ollie aint having that. They held the funeral for Moria and Ollie wasnt there. He probably out getting his mind right. However, Isabel was there to drop some shade cause her ass was supposed to be dead but mirakuru is a hell of a drug, so she back at it on her

How you supposed to be dead but you at someone else’s funeral? Thats Baller. So Diggle and Felcity worried they run to Amanda Waller who of course got the hook up to where Ollie at. He at his other other hide out cause theres levels to this shit. So do we see Diggle and Felicity Walk on on Ollie doin crazy training, nah? How bout him just mad focused dishing out arrow after arrow?, nah? Well what kinda state is Ollie in when they find him?

…… for the entire episode. This is Ollie. I promise you. He did Tobey Mcquire proud. For real Ollie raised the bar on self loathing this episode.a good 79% of the ep is just sadness not even the way for revenge but like someone said my germs on his ice cream cone and he in his feels

When he needs to be bout his revenge. So now they had to get boring ass Laurel in the Arrow cave to give him the WORST any given Sunday “you can do it speech” of all time. She tells him how Blood and Slade are connected. Which gets Ollie back on his murda muzik and Laurel wanting to go in the field too…..why tho? like… you can’t law these villains to submission. Reeeeeeeeeeeeeelax homie.

It should be noted that Ollie was just letting eeeevery body from his barber to his dentist know he was that arrow in this episode as well. He straight up told Jason Blood. Blood was like “heh, shoulda known…”

Also Ollie needs to work on his plans cause his big idea at the climax of the episode him and laurel (you knew her ass was goin into the war zone just accept it) against all these super soldiers and he literally brings the roof down on all of them including himself and Laurel…………….

“And burying yourself under rubble was your plan A you say?…..”