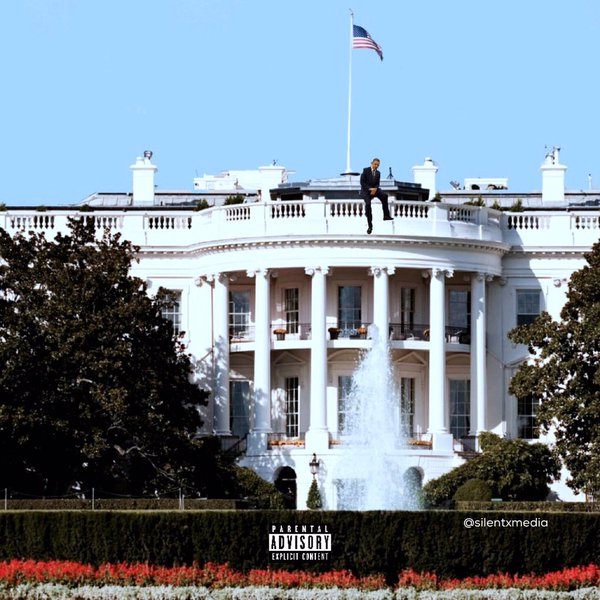 I’ve never been one to immerse myself in the world of politics. I always preferred to care from arms’ length because I’ve always found the atmosphere too stuffy. I hate the whole “Let’s use pretentious rhetoric to bury the fact that somebody fucked up or we’re about to fuck shit up.” Suffice to say, that wasn’t as much the case during Obama’s reign. So when I saw Larry Wilmore, Host of The Nightly Show, and avid believer in keeping it ? come to the stage at the White House Correspondents Dinner, my immediate thought was, “Fight or flight — what’s he going to chose?”

Meaning, to be Black on such a grand stage (on any stage, if we’re being real) you often have two choices: you can play it safe, or you can use that platform to the fullest and be unapologetically Black about it. Which doesn’t mean doing the most as much as it means having no fear in being real enough to tell it like it is. No sugar coating or preservatives; if we’re here to roast, then let’s roast. “What’s Larry’s play going to be?” I thought.

Oh? Ooooh, we ’bout to be Black as fuck about this? Larry Wilmore wasn’t giving a speech, he was playing Call of Duty and going on an epic kill streak. The savagery! Wilmore went for the media as if he were The Punisher. It was as if he was saying to himself,”one batch, two batch, penny and a dime” before letting the choppa ring. I felt like I watching The Raid 2 or Ip Man because each bar Larry dropped made shout, “ooooo-ewwwww” and cringe into myself like I just saw a henchmen get caught with a brutal two piece.

Wooooo! We got ourselves a roast, folks. Wilmore came out clapping for everyone, even Obama for his use of drones and leaving Guantonomo Bay open despite campaign promises to the contrary. What made it sweeter were the groans coming from the collectively white audience that grew louder and longer with each haymaker. Regardless, Wilmore wasn’t swayed by any of this and kept it a buck. It was great to see the formality thrown to the side for once, and probably the last time, to make way for straight real talk through jest (but real talk nonetheless).

[quote_right]”If the cost of this moment is a horde of white tear-filled think pieces, I’ll take it. I will gladly take it.”[/quote_right]I’m watching thinking “Good… Good” as the media sat on the end of discomfort about the way they’re being portrayed, if only once a year. The White House Correspondent’s Dinner is one opportunity a year we get to see if they can take what they serve… and they can’t. Which makes it all the more savory. Wilmore was opening their discomfort like an aged wine and pourin’ it out for the homies right on the podium. I’ma tell you like poet Jeffrey McDaniels told me, “If you can’t stand the guilt stay out the guillotine. If you can’t stand the rhymes, stay out the cypher.”

Wilmore, of course, concludes by putting jokes to the side and informing Barack how much his presidency meant to him, from living in a country where White America couldn’t accept a Black quarterback to lead a football team to seeing a Black man lead the free world. Wilmore could have left it at that, but as the ambassador of keeping it a buck, being on the largest platform he may never be invited back to after making it rain truth, Larry Wilmore left saying something I’d never thought I’d hear or see in my life time on a political platform:

“AND THAT ATMOSPHERE BE SO BLACK!” There’s an infinite amount of things to say about this (that will be said wrong in a number of White think pieces), yet the simplest thing would be how real this was. A gesture we say to one another in solidarity, behind closed doors, to be expressed on national television again probably for the first (and again, probably last) time ever? Yes. A thousand times, yes. If the cost of this moment is a horde of white tear-filled think pieces, I’ll take it. I will gladly take it. This was worth it. There’s no words able to put that moment into any translation for those that don’t get it. There are no words… but there are YouTube links to hip hop tracks.

[quote_left]”To see the President of The United States, a Black man, dropping all these nerdy ass references and Black vernacular is a beautifully uncanny thing”[/quote_left] And then there was the man of the hour. I know Wilmore followed Obama but it feels fitting to end on Obama’s segment. I say fitting due to Obama being probably the most charismatic president we’ve ever had, on some “Best there is, best there was, best there ever will be” Bret “The Hitman” Hart shit. To me, at least, it felt like Obama was never talking at you but talking with you when addressing the nation. We didn’t see him break character, as he was never playing one. Obama was who he was when he got here. If you doubt it, look back through eight years of him at the podium and you’ll find your favorite moment where Obama’s face said everything, often without him having to say a word.

Obama kept it a buck from day one, and it’s only fitting that at his last White House Correspondents Dinner we get to see the President of The United States loosen up the tie, step in the booth, look at Michelle as she drops the beat, then stare at the audience like…

Lawd, there wasn’t even a question of fight or flight with Obama. Dude got on the mic talkin’ that, “uhhh… Look’a here. I’m ’bout to uhhhh… tell y’all all about ya’selves right quick.” This was the Obama many of us continually wait for, when we can see the side of the President not having to address the people with news of another tragedy or mass shooting. We get to see him let loose on critics and pundits only once during this special time of the year. [quote_right]”It was Peak Blackness. Damn near perfect dark”[/quote_right]

I appreciate watching Obama get free. I’m a nerd n**** that grew up in a hood n**** environment. To see the President of The United States, a Black man dropping all these nerdy-ass references and Black vernacular (I will only be referring to 20’s as Tubmans from now on) is a beautifully uncanny thing. Obama stood in front of a room of white folk with arms wide open sayin’, “Aye, this is me” while getting jokes off. And in the culmination of all this, Obama thanked the journalists that uncover truth before perhaps the Blackest moment of all time, on the grandest stage, as Obama bid them farewell, and chucked the vintage LL Cool J deuce — a play on Kobe’s farewell after dropping 60 on his retirement day — for the most memorable exit in political history.

Ya mans and dem dropped the mic. *throws hands in the air and falls back into chair* For this, I live. What more can be done, yo? I don’t know much Blacker you want it to be, but this is it, baby. Obama pulled out the Black card, slapped it on the podium and said, “Charge it”. A college friend tweeted “Never seen so much ‘blackness’ at a political event of this significance outside of the Congressional Black Caucus in my life,” to which I responded, “It was peak Blackness. Damn near perfect dark.” I’m going to remember this as one of the trillest political moments I ever got to see in my lifetime. I’ll tell my children’s children about President Barack Obama and Larry Wilmore on Capital Hill in a room full of stuffy privileged folk being as Black as they wanna be.