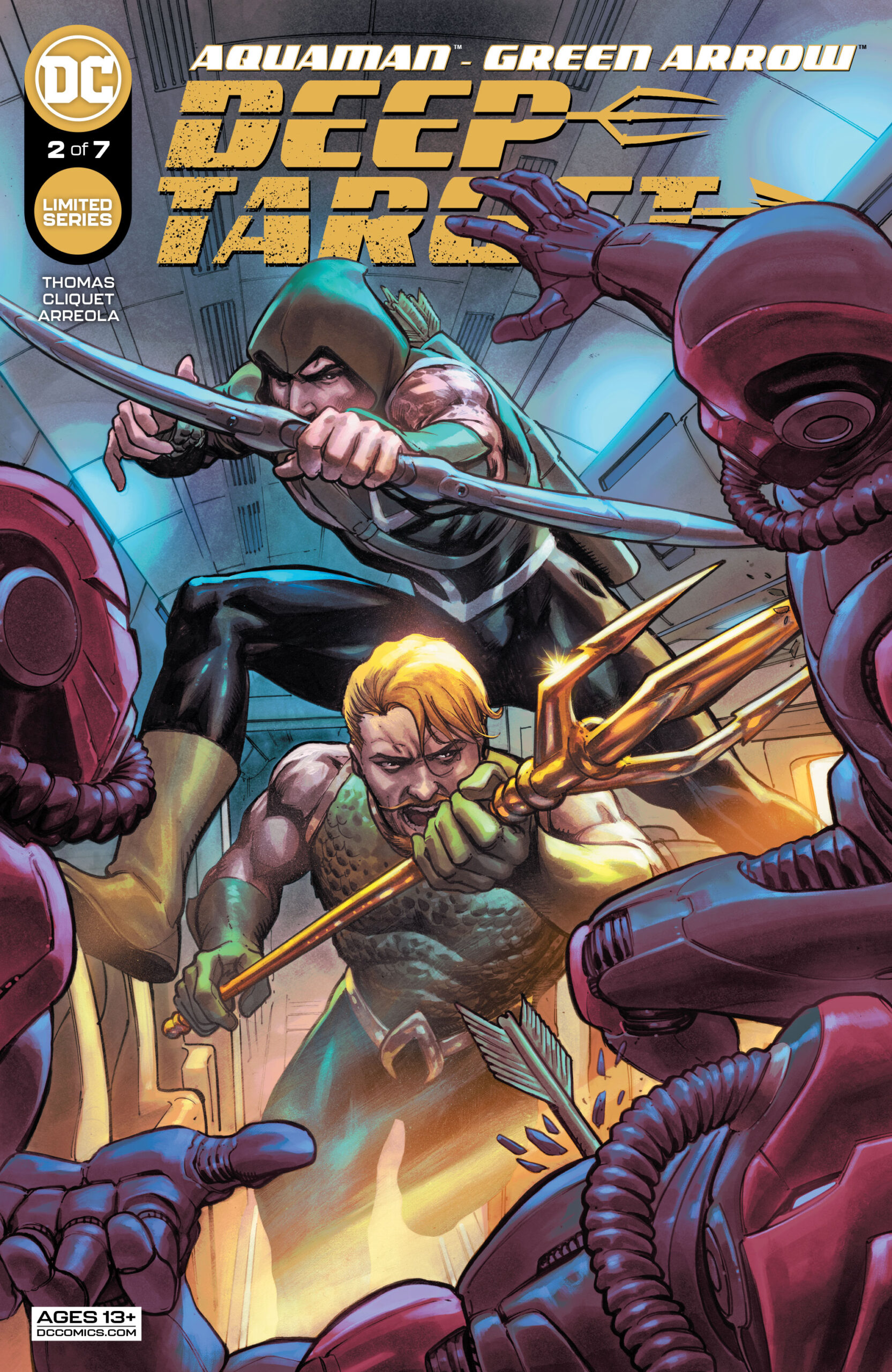 Aquaman/Green Arrow- Deep Target #2 follows our two blonde heroes as they fly in Oliver Queen’s jet to go to S.T.A.R Labs to figure out what happened to them and how they can reverse it.

An airplane is not the best place for someone who shoots arrows for a living and someone who needs water to be most effective to be when something crazy pops off.

So you know that means something crazy pops off, right?

The majority of this issue meticulously details Green Arrow and Aquaman as they fight mysterious masked goons who infiltrate their plane and try to bring it down. It gives Cliquet a wonderful chance to stretch and spread his wings (pun intended) and really deliver some beautiful and dynamic action. My favorite visual from Aquaman/Green Arrow- Deep Target #2 is without a doubt a double splash page where Aquaman spins his trident on the wing of the plane in an effort to block some incoming projectiles. This Aquaman may not be Arthur Curry, but he’s still about that life.

Obviously, if someone wanted to stop their plane from getting to S.T.A.R Labs, that means they don’t want them to figure out what happened to them and to revert back to normal, but the big question is why?

They have each other’s memories so they could still live their lives without compromising anything serious. Obviously for personal reasons, they want to switch back. But what’s the strategic value of them switching bodies but also remembering who they used to be? Maybe they weren’t supposed to remember. I guess we’ll see.

The one thing that continues to make me laugh about this book is that yes, these two heroes have switched bodies, and yes, they live very different lives in two vastly different parts of the world, but at the end of the day, they’re just two blonde-white guys at the top of their respective food chains who get a taste of what life is like for another privileged individual. It’s kind of funny. But I should stop talking about it like that because that makes it sound like I’m negatively critiquing it. I really do like this story, and I’m excited to see how it all unfolds and how they manage to switch back, but I’d be lying if I told you I didn’t laugh every time I see Aquaman & Green Arrow standing next to each other. I have a hard time differentiating them sometimes. It just adds a level of intrigue to the story for me.