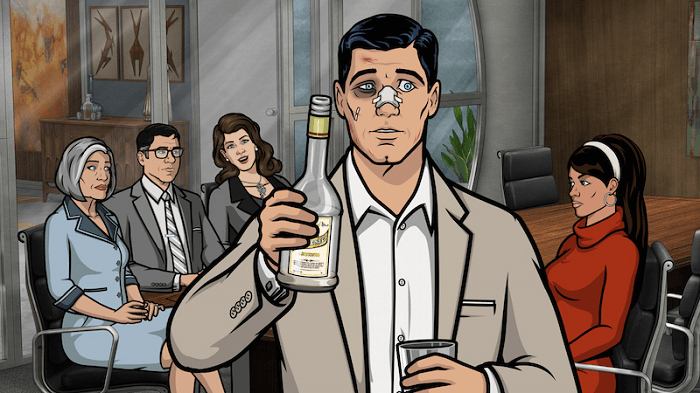 Like many Archer seasons, the first episode usually falls into the good-but-not-great range while Episode 2 often crushes it. This season is no exception. Still pursuing the notion of moving a linear story throughout the whole season like Archer Vice (season 5), Episode 2 begins with the revelation in the first episode: they were duped by a fake Veronica Dean who is now being blackmailed for the disc they stole from her. Whoops. So of course, the plan this episode is to get the disc back, still having no idea who set up the theft.

Let’s just put this out here plainly, the difference from episode 1 to episode 2 is that the jokes were funnier and hit more frequently. The visual gags were top notch and the written jokes were from very good to outright hilarious. Pam, Cheryl, and Ray spinning around in the office chairs or the audible sound of Archer getting an erection when Veronica Dean touches his arm are genuine laugh out loud moments. Also, I have no idea how they top the prank voicemail prank they pulled off in this one. It feels like the culmination of years of preparation.

Patton Oswalt lends his voice to Veronica Dean’s sleazy lawyer and he delivers the jokes and meekness in spades. The call-backs and references work as well, like the analogies to The Usual Suspects.

All in all the episode worked really well on multiple levels and was pretty funny consistently. I kind of expected another cliff hanger to lead to next episode, since it seems that they are doing a full narrative for the season again. All in all, great episode and hopefully, they can sustain that level moving forward in this 7th season.