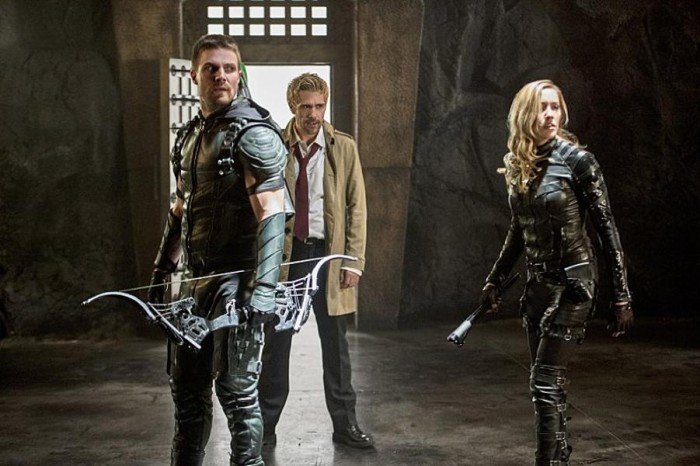 And you say Star City! And I say a whoooleeee lot more than just Star City!

I like to save the Flashback recap for later in the recap, but the relevance begins early, so let’s get into this. Oliver gets pressed by Conklin about the bag full of communication devices and spy things that he found by the cave. He keeps bringing up the point that everything was gravy train up until Oliver’s arrival and now supplies are being stolen and 2 guys have mysteriously walked into mines. He has no evidence linking billionaire mischief-maker to all of this, so the torturer redirects their attention to the blonde man who he actually caught spying on them.

DUN DUN DUN!! Welcome to our Flash/Arrow-verse, Constantine. The world of superhero television just flexed a little bit. Not bodybuilding competition levels of flex, but enough to get yourself a few hundred Instagram followers levels of flex. 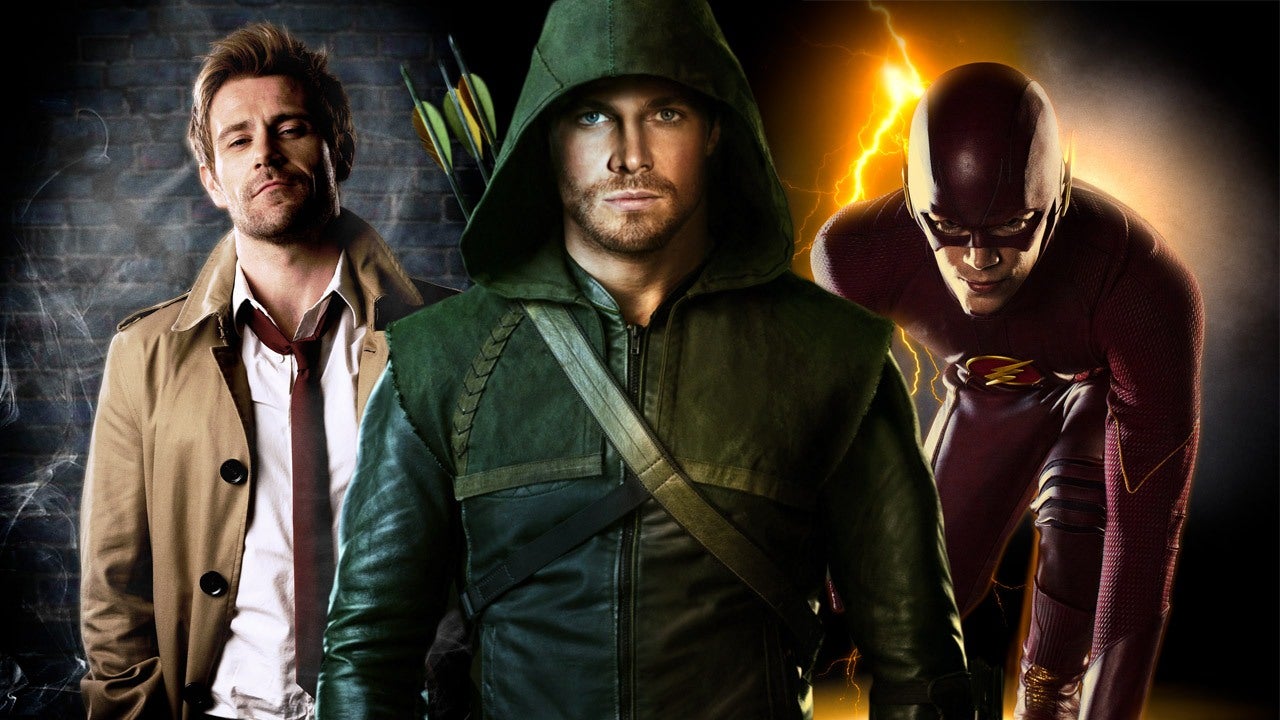 Constantine whispers a few words while Oliver, the torturer, and Conklin are distracted chatting, then is out of his cuffs with ease. He rocks one dude and holds Ollie up, then steals a truck. He makes Ollie bring him to some spot and Constantine begins to poke around until he finds some herbs. He says a few words, tosses the herbs in the sky and boom, a secret entrance appears.

They walk through some tunnels as Constantine drops a few preaches and speeches until he reaches the end of the tunnel and cuffs Ollie. Constantine goes to retrieve some magical looking artifact. Ollie shows he has some cuff escaping skills himself and as he walks into the room John is grave-robbing, he realizes the artifact is Indiana Jones booby trapped and saves Constantine’s life. Grateful for his life, John tells Ollie that he now owes him one. They walk away and Constantine explains that the thing they took was a grimoire, an ancient spell book and what he’s going to do with it is what he does with all the mystical things he finds. Keep them in a safe place, out of the hands of evil doers. John offers Ollie a ride off the island but Queen declines because of all the people he would be leaving behind. Right before leaving, Constantine decides to go full Houdini and transfers a tattoo from his body to Oliver’s, who then gets a nice punch in the face to cover his excuse as to how Constantine escaped. We pick up our present day coverage yet again, with some thugs up to no good. This time they’re harassing some nice waitress in one of the thousand alleyways Star City maintains for their criminal underworld to flourish in. Luckily Demented Sara is there to save the day. Umm what? By save the day, I mean shank the shit out of these criminals and demolish their existence then turn her murderous glare toward the waitress. It would’ve been lights out for her, but the cops pull up and save her from sure death.

Felicity is up at Palmer Tech dreaming up some nerdy hack fantasy when she stops Baby Cisco homie, Curtis, from leaving for the gym. She’s like, “Ummm, instead of going to change that thin dorky frame into a body that Mr. Fantastic could be proud to rep, how about you take another look at Ray’s USB message to me? Pretty please. Oh you won Bronze in the decathlon in Beijing?. Yea, zero fucks given. Can you hook it up?” He agrees and they notice that the recording is layered so he needs to clean it up.

Lance is visiting Darhk again. Darhk is throwing mad resurrecting Sara shade then tells Lance he needs a favor. Darhk wants Lance to gain access to the Federal Server Firm and plug some contraption into one of the computers. Righttt, because it’s not going to destroy the city or anything.

Ollie and Speedy are busy training. Always training! These two would’ve put Rocky, Colt, and Tum Tum to shame. Oliver compliments her on the political analyst she hired earlier. They contemplate his love for Laurel. Speedy tells him to realize who his real friends are.

Felicity gets a Crime Life Alert about some girl going “cray cray”. Turns out to be Sara out in dem streets going full attack zombie. They scare her off after rescuing the woman that Sara was ravaging. Oliver sees her and is shocked, then puts together the Lazarus Pit pieces reeeaaaalll quick. He beasts on Laurel, because why the hell not with her annoying ass. It is her fault.

Dig presses Lance about his partnership with Darhk. He pours his heart out then pulls the guilt card and says he had pics of his daughter. Then Dig is like, “All good. We gone use your ass to bring him down anyway.” They infiltrate the facility and infect the computers. Lance heads back to tell Darhk that the mission is complete. Before he leaves, he asks Darhk about Diggle’s brother. Damien Darhk is so surprised, taken aback, and baffled that such a mere mortal would ever speak out of line that he hits Lance with the real deal breakdown. He erased the record of a dead man. But why this dead man? Turns out they hired an assassin to kill Sargeant Andrew Diggle because he was into some real ass crime lord shit. Guns, drugs, the whole 9 yards.

Back at Felicity’s crib? She’s talking to Ollie mad intimate with 90’s R&B type tunes playing in the background. She sifts through her bag of tricks and finally reveals she has that message from Ray and was afraid to listen to it. Ollie somehow manages to spin this to be about him then they realize why Sara has been attacking these random people. They look just like Thea. Blood drunk.

Immediately afterwards, Sara pounces from nowhere, literally nowhere, onto Thea like an enraged jaguar. Pretty dope in-house battle ensues until Sara is about to finish her and Thea cuts that crazy chick with some broken glass and books it. Thea gets the Grey Worm laid up in the hospital bed treatment. She realizes Sara is going through the same bloodlust she suffered and Ollie gives us what we all want when he decides to take his frustration out on Laurel. He lets her have it too. Then out of nowhere, Laurel pulls some equality card low blow while arguing!! The violin music hums. She makes Ollie feel bad. We do not get the full blown beast session she deserves.

While laid up in the hospital bed, Laurel apologizes to Thea for bringing Sara back. Thea apologizes for killing her in the first place. It’s quite hilarious. Thea then volunteers to let Sara kill her in order to get her back to normal. Ollie pops up as Thea tries to sleep. He chats with Laurel outside her room. Inside the room, Sara is choking Thea out on the low-low. Ollie hears a crash and runs in to save her from the stranglehold. Sara straight up dives out of the (most likely crazy high) hospital window. She’d be dead. No doubt about it.

Team Arrow gets back to the new lair, and after some deliberations decide to use Thea as bait. They all hide and string Thea out there like a piece of meat to bait Sara so hard that she comes flying in through the windows like an indestructible iron eagle. She hits Laurel with the 2-piece real quick, battles Oliver, and subdues his broke ass for a minute then Laurel pulls out the Glock like she bout that life and is ready to end resurrected Sara’s life until Ollie hits her with a tranq.

Mr. Queen then proceeds to call his old buddy John Constantine, to cash in on that favor he owes Oliver.

Restoration of her soul to her body. He’s done the procedure once. Good odds of this working again. A few jokes about Oliver being surrounded by beautiful women go down. Few more are made. Dig is called and comes through. Now they are ready to go to this other realm and bring Sara back.Oliver steps in and asks Laurel if she trusts him. They both step in and Constantine lights a pot then begins to chant some other worldly vernacular. All three are transported to another world and go off on a crazy adventure to find Thea. They battle a few hooded men and put the hurt on them, then finally find her, trapped in a fountain by demons.

They’re finally embracing their crazy side!!!

Constantine handles the last minion as Oliver and Laurel pull Sara’s soul out of the pool of evil holding it hostage. Happens pretty easily. Kinda weak.

Back at the campaign headquarters Oliver is getting coached as Laurel arrives. She updates Ollie on Sara’s recovery and thanks him for the invite. They hug and make up. It’s sickening.

Lance pops up at Dig’s crib and gives him the option to remember his brother how he knew him, or how he really was. Dig goes with the truth.

Big nerd homie Curtis has been drinking mad energy drinks staying up all night deciphering the message and Felicity finally walks in to hear it. Ray is still alive.