And you say Star City! Let me just start this recap off by saying that sometimes I have to remind myself that I’m watching a CW program that had what it took. “Restoration” officially marks the first time I’ve watched Arrow and fully understood how this show can be so idiotic yet entertaining as all hell at the same damn time.

We jump off with the OG Arrow trio of Oliver, Diggle, and Felicity hunting down some ghosts. Ollie and Dig still on that untrustworthy flow. Dig tries to take down a ghost and gets blasted and put on his ass before Ollie can come help, so the perp escapes, but not before Dig extracts his cyanide suicide tooth. They bring it back to Smoake so she can work her magic.

She tries to work her friendship magic and get the guys to go out for drinks but Dig squashes that on some family man excuse bull. Ollie is fed all the way up and ain’t waitin’ on Dig to come around anymore. Only so much apologizing one man can do!

Laurel and Thea are down in Nanda Parbat asking Thea’s pops, Malcolm Merlyn, the new Ra’s al Ghul for help bringing Sara back from the dead. He busy putting in that Last Samurai work with Nyssa. 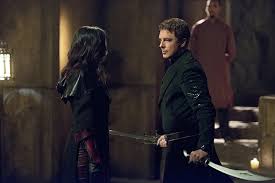 He finishes his steel sparring and hits these chicks with the neck breaking: “You fuckin’ serious? That shit hasn’t been done in ages, and even then that was only in Parbat legend. Not to mention, Thea wasn’t dead when they put her in to be revived and look at her tormented ass! Laurel, you down to force your sister to go through that, let alone Lord knows how much worse? Y’all really tryna have her go full zombie on a player?” Do they take his advice? Did anyone believe for a second that they were going to listen to the voice of reason? Of course not! They tell him they’re down with the movement. He proceeds to shut down any possibility of this going down and dismisses them.

Diggle returns home to find some guy lurking in his crib. To Dig’s pleasant surprise, he’s A.R.G.U.S. and passes Dig a pic and some info on Mina Fayad. He says that she flew in from Markovia last night and will tell Dig where she is when he knows. Next scene, Ms. Fayad rolls up to Damien Darkh’s lair and expresses her dismay with how good Team Arrow is. She presents her boy — tattoo card, knife throwing metahuman Double Down —  who shows off his wannabe Gambit deadly card-throwing skills on the guy he was partners with when Arrow and Dig broke up their crime party earlier. He tells Damien that one was free but killing Team Arrow gon’ cost ya a few dollas!

Thea’s talking to Ra’s al Merlyn about her growing passion for death and destruction and he tells her that the only way to alleviate the Lazarus Pit side effects is to fulfill your bloodlust with bodies. Straight up merk city is the only way to ease the pain. Thea looks at him dumbfounded then lashes out in anguish and swears that she won’t stoop so low as to kill to help herself. Malcolm Ghul seems to find the faintest glimmer of hope in his heart and tells her that first thing in the morning they can make their way to some mountain so they can find a sage that can help her. Meanwhile Laurel is pleading her case to Nyssa, but she’s like nah, I wouldn’t want to see my beloved like that. Laurel is all in. That’s about it.

Dig is busy on a solo stakeout when Felicity tries to reach him, she and Ollie are back at ArrowCave worried Dig is scoping things out, when he gets rolled up on by some dude. He holds Dig up, but Dig hits him with that quick reversal and beats him down. Ollie takes on the card knife-throwing Double Down, deflecting card shots and utilizing his environment like Captain America.

A shootout ensues on Dig’s end then the bad guys break out. Oliver gets overtaken by the tattoo blade-blasting abilities and runs away, through a wall. Yes, I meant to say that. He runs away from the battle, overcome by tattoo card fear, jumps into a garage door-type wall and lands on the hood of a parked car on the other side. It was quite comical.

Back at ArrowCave, OG Arrow Squad is getting the Poke Center healing treatment when Felicity goes BAWSE lady on ’em. She tells them about that both running up in battle without Robin by their side and catching those individual fade sessions. She straight up locks them in the basement and makes them hash their bullshit out. I’m not gonna get into the details. This is The CW we’re talking about here. They kindaaa see eye-to-eye but Dig still needs a little more time to trust the dastardly fiend.

Felicity gets herself a Cisco (from Flash) in the guy who’s job, and his employees’ jobs, she helped save last episode. She recruits him to analyze the card they found/were stabbed by. Later in the episode the Double Down tattoo meta attacks them both. Felicity picks up an automatic weapon and proceeds to buck off an insane amount of shots at will until homie bounces. She does save the day. Respect.

Ollie and Dig are investigating when Dig lets Oliver in on the fact that the woman he has been hunting, Mina Fayad, just arrived last night. She killed Diggle’s brother and most likely sent the metahuman to kill them. Its his first real lead in 2 years and he’s dead serious about catching and probably murder-death-killing this woman.

Darhk is busy threatening his employees, letting them know he that failed murder attempts don’t sit right with him. He decides to give Fayad and the meta a demonstration. And by demonstration, I mean he asks the meta to kill him. Double Down obliges. He tosses a tattoo card blade at Darhk and Darhk hits him with the slow motion.

He kinda has some swag about him in this scene. He displays his powers and the card, showcasing his superiority, then as we all anticipate the meta’s impending death, Darhk sends the card flying in the throat of Mina Fayad.

ArrowCave: They’re hacking the universe searching for Fayad and can’t find a trace of her. Then PING. They have a cross street. The duo is back? Maybe. They go out, find Fayad murdered, and aim towards the final battle with Double Down. They track him down and shoot an explosive arrow at his car, like that’s normal, but he gets out and attacks them with a few flying razor cards. He gets bodied by one of those wrap-up bolas and is subdued pretty easily. The best outcome of this whole thing is:

Back in Nanda Parbat, Thea is dreaming of a brighter day when her dark senses go off and she wakes up to two cats trying to murder her. What proceeds is the deadliest swagged out flawless victory in TV history. Thea woke up and massacred these men like the sacrificial lamb. And it was as glorious as TV death can get.

End of the episode is near so you know the ridiculous scene levels are about to rise tenfold. Thea packs up and prepares to bounce out of anger and the utter disgust of her father, when Ra’s al Guhl rolls up to try and console her. But let’s keep it 100. We all knew they had to bring Sarah back in time to get this Legends of Tomorrow show to pop off. But that’s none of my business doe. I’ll just continue to sit here and sip my tea. Anywaysss Ra’s is like, “YO. I’ll do it. In order to make things right with you, I’ll bring back Sarah.”

They put that gross, super-blonde, skeletal Sarah into the pit and out rises some deep, dark, demented version of her former self.

She’s attacking people on some zombie mode shit. I don’t know how the writers plan on turning her back into a crime-fighting heroine, being that she came back from the DEAD and should be wayyy more evil than Thea, but who knows. This show has started to shed its cautionary shell and take a few more risks in the meta human world and magic realm. Oh yeah, Nyssa destroys the Lazarus Pit, soooo that flash forward we saw in the premier? True.

The flashbacks we get this week all involve Ollie in his new mercenary guard role and this woman who he has been giving the horny eyes to on the low. Somebody has stolen something from the mercenaries so they round up the slaves. They tell them to fess up who stole their ish. Nobody steps up and the first bullet flies and the first body hits the ground. Next sacrifice. Right before the 2nd bullet flies, the girl who Ollie has the down low hots for admits she’s been stealing the pain killers for the workers, who are being worked too hard! They’re not having it. They line her up for death and Ollie steps in and requests to kill her and get rid of her where no one else will see. The boss allows it, but sends a guard to make sure the good deed is done. Ollie lures the guard into a land mine and let’s the woman go. I don’t know if the woman’s billionaire shipwrecked hate earlier in the episode got to him, but Mr. Queen is risking a hell of a lot helping this woman. He’s living the good life!

Felicity the female hack gawd getting her phone hacked? Nah, shit don’t add up son. No way she’d just be nonchalantly complaining about her phone actin up and not investigating on what’s really good. Gotta be that Ray Palmer revival. Only person out there who could probably hack Ms. Smoake and have her brush it aside like that.

Oliver Queen, I thought you were running for mayor. What happened? Oh you just forgot? Decided your friendship with Dig was more important than the city all of a sudden? Yeah tell your writers to get their shit together.