Season 4 of the OG superhero show promised to finally deliver the man most DC fans know and love: Green Arrow. Not The Hood, not Arrow, not the vigilante, but GREEN ARROW. I must say, the show did a good job of setting up this final transition and should have a full season to dive into and flesh out the billionaire playboy turned island captive turned vengeful son turned murderous vigilante who has finally transformed into a believable and viable hero for Starling City.

Where Are You Now?

The season premier starts off with a fake out flashback. It’s Oliver Queen running through trees on his purgatory island Mowgli flow, buuuttt it’s not the island, it’s his Pleasantville morning jog. He and Felicity Smoak are doing exactly what they said they would: living a calm, relaxing, enjoyable suburban Ivy Town life. They went full cuffin season.

Ollie and Felicity are in couples’ paradise talking to their friends about enrolling the kids in school before they’re even born, because the wait list is that long. Welcome to being  a family man Ollie. 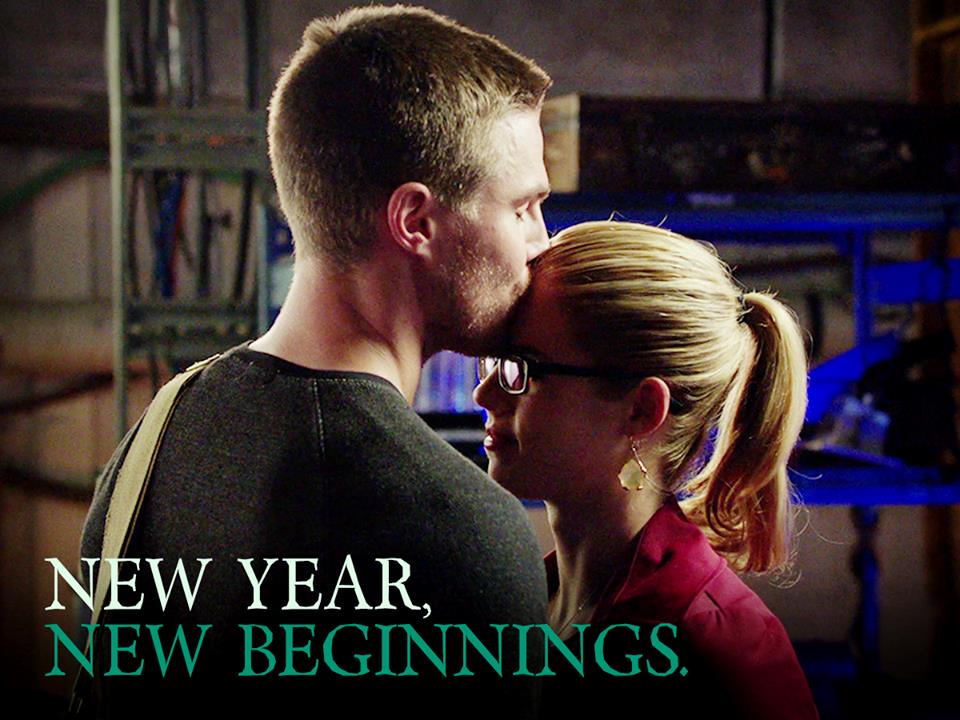 Back in Starling City, Diggle, Speedy, and Canary are trying to foil some gang’s attempt to hijack a truck’s cargo. They fail miserably and shoot back to headquarters. These dudes who call themselves Ghosts are running the city. Laurel wants to ask Oliver to return but Dig is embarrassed they couldn’t hold it down in his absence.

Assistant D.A. Laurel Lance is meeting up with a bunch of men and women in suits, so you know it’s real. The city is broke and they need something to make things better. There’s a joke about throwing a Flash Day like Central City did on The Flash this week. They love that Easter Egg ish. Hal Jordan sighting anyone? Out of nowhere, a blonde haired creep (that we know is Damien Darhk) walks in and goes off on a super evil cryptic tangent then tells the room to say goodbye to all the people they love. How long we gon’ wait for the plan of this season’s big bad to go into action? A week? A few days? A few hours surely. Nope. Next scene the D.A .gets poisoned while talking to Laurel. It was actually pretty comical, besides the fact that she’s probably dead.

Doors blow off at the police station and armed men take over as Captain Quentin Lance puts his tail between his legs. Canary flies and saves the day a whole 2 seconds before backup arrives. Lance took a slug at some point in there. It’s game time.

Ollie and Felicity are sitting at a fancy table indoors. Oliver excuses himself to hype himself up so he can be ready to pop the question, and suddenly the doorbell rings. It’s Thea and Laurel who tell Ollie about the horrific conditions the city is under, the Ghosts terrorizing everyone and, more importantly, that they need a hero. Marriage saved by the bell.

We get a bit of real flashback info on Ollie and Amanda’s story. They’re sitting at a bar. Amanda thinks Ollie is scared to go home and tells him he needs to embrace who he is. Let the darkness run its course. Ollie gets dizzy and faints. As he drifts off Amanda tells him to remember that she’s trying to help. I actually like what they did with this scene. Amanda is one of my favorite minor characters on this show and I’m glad they are handling her properly. Later we see that Amanda sent Ollie back to the island. But why?

Back at Arrowcave, Dig finally sees that the ladies have gone and retrieved Ollie from couples’ getaway and he’s PISSED.

I meannnnnn, son did kidnap his wife and almost put his baby in harm’s way, so I might not trust a man after that either. They clear that air then Felicity chimes in that she just hacked into KORD Industries and they ’bout to detonate some nearly nuclear cluster bombs that will level the city. Dig said he’s gonna ride for the city.

Ollie starts shouting orders and the team just stands there looking at dude like he’s stupid. He realizes he doesn’t call the shots anymore… but he’s still got Smoak… THEN he realizes that she’s been helping the team behind his back and I guess he’s mad? Now that I think about it, she was super gassed to go help when they came to retrieve them from couples paradise. Nerdy adrenaline junky?

Turns out, she’s been lying the whole time!! Well not lying exactly, just exchanging secret emails with the team and using phantom injuries and illnesses to go assist, because she’s been bored while he gets his Gordon Ramsey skills up. Not to mention that she’s so good at hacking and being awesome.

I don’t know which way to go on this one. The sympathetic side or she’s triflin side?

Dig and his wife have a nice moment where he is surprised when she says something favorable about Arrow. He doesn’t know how she could be so not pissed only 6 months after being kidnapped by him. She tells him that Arrow doesn’t always make the right choices, but he did what he thought he needed in order to defeat Ra’s Al Ghul. Man up Dig!

Ollie (sans costume) is out with the team at Damien Darhk’s super villain lair, spying on the mastermind running this operation of terror. Darhk is talking to the man he put in charge of the cluster bombings and seems to be getting more and more heated, until he reveals that homie screwed up and he’s about to unleash some ungodly destruction upon him. He touches the guy’s chest and his face starts to turn Joffery wedding purple as it appears the life is being drained out of him. The gang finally feels like maybeeee it’s time to do something about this. There’s a big shootout and they get some near dead guy to reveal that Darhk plans to blow up the new train station.

Ollie and Dig have a dramatic conversation while snooping around at the train station. Dig basically tells Ollie he has no heart and storms off. Laurel and Quentin Lance walk in and split up. Q stops by the Shit on Ollie Train and tells him the city turned to garbage when he donned the hood and he’s a monster and Ollie is all like, no, thats not who I am anymore. Then the big question gets dropped. Then, who are you?

Oliver goes back to Arrowcave to sulk. He doesn’t want to be the dark person he feels he needs to be fight the darkness consuming his city. Smoak puts on that seductive librarian charm and convinces him that he can be a different person. Then she reveals the new costume. A nice forest green, how it’s supposed to be.

Dig and Ollie track down the train being hijacked. Arrow does some crazy Shinobo, parkour somersault from Dig’s van onto the train. Queen takes a few bodyguards out and finds Darhk. He fires off an arrow, then a few more and Darhk stops them all..Matrix style.

Back at Arrowcave, Ollie tells the team that he believes it’s Donnie Darhk pulling the strings. We knew that though. What we didn’t know was that Ollie would go on tv to broadcast a transmission that he is no longer the dark vigilante he once was. He wants to be a sign of hope. He is now Green Arrow.

Turns out Quentin Lance is working for Damien Darhk. He has Lance under his finger for some undisclosed reason. I always knew Lance was a snake.

Oliver and Barry end the episode standing in front of a grave six months in the future. Ollie asks Barry to be left alone, so he flashes out of there. We’re left wondering who’s buried six feet deep and who is responsible for this tragedy.

Fun episode filled with a lot of suspense and surprises. Didn’t blow anyone away with the action, but Oliver finally donning his official Green Arrow costume was more than enough to earn this episode plenty of high praise. I also need to give this episode a particular shout out because it rarely happens on a CW production. The violin music soft scenes were pretty damn good! The conversations between Queen and Smoak while on vacation, not to mention their debate to return or naa were convincing. Diggle really showcased some real deal emotion when talking about or to his wife.

This could and should be Arrow’s culminating season. All the pieces are in place. I expect tons of mystic battle sequences, dramatic introductions, exciting encounters, intriguing crossovers, a little less death, a whole lotta action and DEM BOWS.