In the anime world there comes a time where we need to sit down, grab a nice Paopu fruit, and enjoy a great show. You ever wanted to kill your teacher? Well if you said yes then you’re in luck because Assassination Classroom is the anime for you! You might even get some pointers on how to pull of the dirty deed.(Disclaimer: Blacknerdproblems does not condone killing your homeroom teacher but gym teachers are fair game)

Assassination Classroom is a manga that started in 2012, with an OVA in 2013 and finally a full fledged anime in 2015. The story revolves around class 3-E which is basically the reject class of the school where students are placed due to bad grades or just by being delinquents. Here they are discriminated against and treated unfairly by the other students and teachers of the school. Coincidentally this class gets chosen by the government for the task of assassinating an octopus-like, talking creature before he destroys the Earth. Oh, but the catch is that he wants to teach that specific class because he just wants to be a teacher. No big deal.

Because the class couldn’t continue calling him an octopus monster they instead gave him the name Koro-Sensei(a pun on “korosenai”meaning unkillable and “sensei”meaning teacher). Koro-Sensei has the ability to dodge bullets, regenerate limbs and travel at mach speeds, mach 20 to be exact, which provides some hilarious outcomes to assassination attempts such as him grooming the students or just ignoring the assassination altogether.

The things that really make Assassination Classroom special are the characters , most notably Koro-Sensei himself, who is hellbent on improving his students anyway he can (including helping them find ways to kill him) because of the way they’ve been treated. The students are in an isolated classroom on top of a mountain with no air condition and no connection to the main school campus. The students who are sent to 3-E become depressed, shunned by the school and society in general. The school system is made so that the reject class is the throw away class while the other classes are given free reign to ridicule them. Koro-Sensei has a passion for wanting to teach this class, for reasons unknown in the anime so far, which gives depth to his character and makes you want to know more about him.

The way he cares about his class is something that is unparalleled and his teaching methods are on point. He’s also a candidate for best teacher of the century. Each character in the class gets their own little moment to shine which is something to praise this show for because it never forgets anyone all the while including more than ample character development.

This show goes from comedy, to action, to a little bit of drama seamlessly with the way its narrative is structured and will make you fall in love with it the moment you see Koro-Sensei’s squishy face. So rejoice! For Assassination Classroom is here and is ready to kill you with it’s charm, pun always intended. 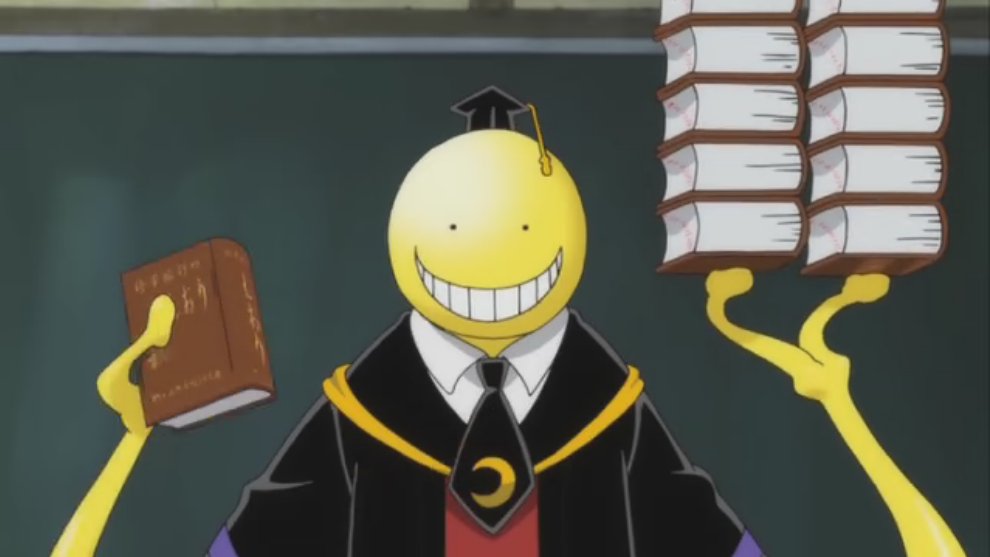