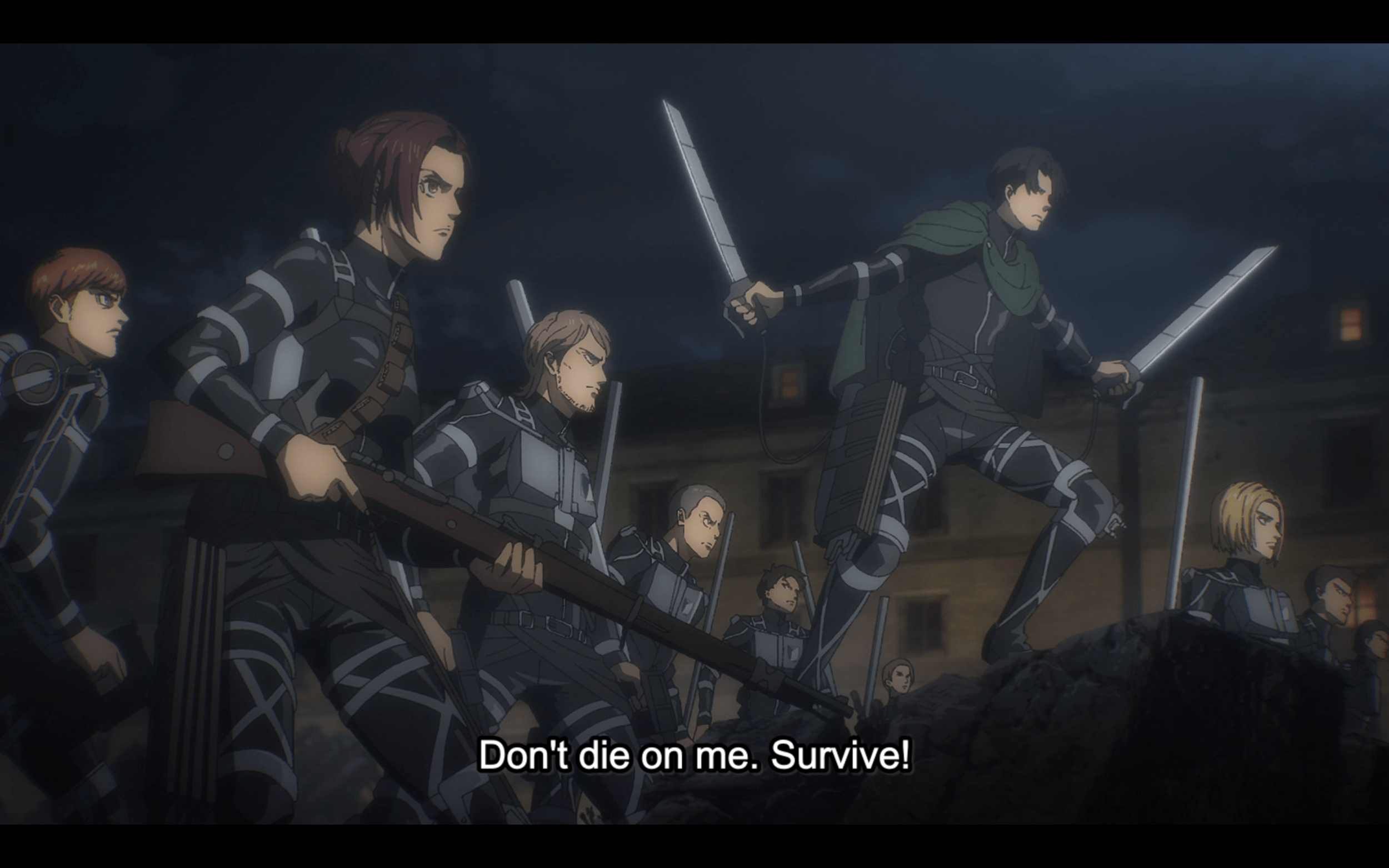 Where we left on…

Here’s the deal, Omar and William were minding their own business on a Sunday evening when they noticed Attack on Titan was trending on Twitter. Whut? So they dropped everything, watched the newest episode, then went directly to the booth to talk that shit. As you can imagine ALL the spoilers for every episode of Attack on Titan this season (through episode 66).

William: Look here man, last time we seen this Titan on Titan violence, Ayebody was five years older, Eren done went Jay Reed in 2 Deep in Walter Reid Hospital and gave Reiner the facts of life before he leveled the theater district. Warhammer Titan came out and fought Eren to a standstill, but then Mikasa came through with the Asparagus colored Thunder Spears and helped Eren capture the Warhammer. But Omar, please tell me what the most elite acrobatic squad was doing while this went down.

Omar: THEY WAS RUNNIN THROUGH MARLEY WITH THEY WOES! YOU KNOW HOW THAT SHIT GOES! And if you don’t, it goes one shot one kill for any and every citizen of Marley that happened to be in the streets. The entire Survey Corps out here dressed up in black-ops edition Nike gear, black Timberlands, and no ski mask cause they want everyone to see who’s licking shots up and down the whole block. I’m talking more gunshots than a Freddie Gibbs track. I’m talking more gun bars than any rap battle you’ve ever seen. I’m talking more gun smoke per capita than Cable’s hyper combo finish from Marvel vs. Capcom 2. Meanwhile, Levi (per his usual M.O.) had Eren’s back covered. Literally. Beat the face off the Jaw titan. King shit.

William: I just want to say off rip, I am here for any and all rematches. This feels like old-school boxing, where you never got tired of seeing the same heavyweights fight each other. Sign me up for this Levi vs Beast Titan II. Though, it was the equivalent of the Tyson v. Spinks, where Spinks got his ass knocked out in the first three minutes and NEVER FOUGHT AGAIN. But still. I’m here for it. But…I’m getting ahead of myself.

I was heartbroken when them PDs (Paradis Devils) started getting shot out the sky man. They were using the big boy bullets on them dudes. Cart Titan really splattered some of our folks on the buildings man.

Omar: Cart Titan’s turret got everybody feeling Team Marley feeling real ‘legs up on the coffee table’ type comfortable. Got them PDs doing Star Fox, StarCraft, and Star Trek evasive maneuvers in the air to dodge bullets. Man, Marley thought they were up 15 points before halftime and got control of the whole fight. Beast Titan calling out Levi by name like, “I ain’t concerned with Emo Eren. BRING. ME. LEVI!” Jaw Titan, Cart Titan, Beast Titan, out here lookin’ like the Detroit Pistons Bad Boys era.

Meanwhile, they didn’t know their Navy was playing a round of Battleship with that boy Armin. Sorry, let’s give that man his appropriate title: that Colossal Big Man Titan Armin. Armin literally flushed all these Marley ships royally. Then straight sauntered forward like he didn’t just turn the ocean into a kiddie pool and stomp out all their whole fleet. I know Armin on some other shit now, cause he stomped on them ships like they were legos and ain’t felt a damn thing. That’s how I know that boy was war ready now.

William: ARMIN ROLLED UP LIKE HE WAS ROWING ACROSS THE RIVER STYX BETWEEN THE BOATS MAN, COME ON. I was like, my dude got the hood all low in the rowboat like he taking souls to the other side. BECAUSE HE WAS. Maaaaaaan, that boy said don’t let the growth spurt fool you, I’m still on my devastating tactical strategy game.

But yo, can we talk about Beast Titan really, REALLY trying to call out El Capitan Levi? What in all fucks man? Did this dude not see The Last Dance documentary?!? Does he not know what happens when you call out Jordan like that? He takes that PERSONALLY.

I bet Levi even put some money down on this shit too. Give me $1500 eddies on the survey corps to win outright? What odds you got for the Cart titan? Over / Under she kills four PDs? Ugh, that’s my fam, but I believe in smart money, so give me the over. Oh, Armin versus the ships? Give me the poiiiiiints.

And what happened? Beast Titan turned his head for like 4 seconds and Levi cut that boy down like he was pruning a bonzai tree. And ain’t no ripping you out of the frame this time. He planted the blade in his cheek like he landed on the moon, then shoved that grenade in his sinuses. I am UNDONE.

Omar: That’s all Gilliard’s (the Jaw Titan) fault too. He had one job. We all heard the instructions for said job, “Guard the Beast Titan’s nape”. The Cart Titan even told him his job. Man, the Gilliard saw Armin goin’ splish splash with their armada in the deep end of the pool, felt a way, left his post, and the Levi turned the Beast Titan into a fucking bison burger. AGAIN! Had the Cart Titan and its turret backpack working overtime till Sasha ‘it’s bullet time’ Braus hit a fucking beautiful gunshot from behind the three-point arc that went through one of the gunner’s head.

Sasha out here embarrassing this titan with nothing but a fucking musket. The fucking, “Hear ye, Hear ye”. To make shit worse, Jean came from over her shoulder and the slide with all the energy of Fast and Furious: Tokyo Drift before firing a rocket at the Cart Titan’s whole ass face for the assist. THEN THE WHOLE PARADISE DEVIL’S TEAM RAINED DOWN THE NUKES ON THE CART TITAN! Somebody needs to start a “DE-Fense” chant for the home team, yall. They selling jerseys out back.

So let’s recap: Beast Titan became a bison burger and the Cart Titan got the skirt steak flambé temperature with all the seasoning all because Gilliard out here getting emotional. The Jaw Titan was runnin’ his jaw, runnin his legs, then looked back and saw his team on the ground with a white sheet over their bodies in a matter of twenty seconds. I’m not saying these Marley Titans blew a lead, I’m just saying it might be time to consider new management. We gotta review some contracts after this, you know what I’m saying?

William: Oh, no, they blew the fuck out that lead. This is like when the small division schools dominate their division and then beat ‘big name but average skill’ teams in the tournament. Then they’re in the Sweet 16 and everyone is like, ‘Hey, don’t sleep on SE Wisconsin Valley Tech now, they could make a run’…and then North Carolina steamrolls them by 46 points. Marley was talkin’ all that shit and got ran for their titans, their legs, their ships, their jaws. Omar, how you get ran for your fuckin’ jaws, man? After Mikasa did the Jaw Titan like Obi-Wan did Anakin. Eren was like, “Oh, your arm, you don’t need that shit.” Then used his fucking teeth like a Swiss nutcracker.

I still can’t get over this brutality man. Just to be clear: Eren put ol’ girl who was the Warhammer titan in the Jaw Titan’s mouth. Then squeezed the Jaw Titan’s head like he was making a fine Titan wine and that dude’s head was a grape. Until it fucking liquified the War Hammer Titan’s body. AND PROCEEDED TO DRINK HER LIKE NECTAR. My hand did not leave the imaginary pearls around my neck for about five whole minutes. I can’t. I couldn’t. I almost didn’t.

Omar: Man, this battle looking done for the Marleyans but that boy Jean got a Kobe Bryant mentality cause he said, “Fuck yall at home celebrating for? What yall anime gaspin’ about? The series ain’t over. Game ain’t done.” Right as he went to finish off the Cart Titan. This little kid Falco Grice coming in blocking the kill shot tho. Man, Jean had his jump shot poised and ready to release that missile, thought about it for a second, and said, “fuck them kids” and sent that shit flying. Listen, it looked like he may have missed subconsciously on purpose, or maybe the steam from the Cart Titan knocked it off course. Either way, I’m proud of that man cause he was not wrong… Fuck that kid.

Aye. Aye. Aye! Don’t you get mad at me saying that shit either! Jean kept them casualties down to a minimum for as long as he could. Out here trying to be a decent man in an indecent time. He ain’t tell that boy to step in. Mind you, Falco had plans to be the Armored Titan and attack them again after the fact. Way I see it, these is two muhfuckas that need to be dealt with getting dealt with by the same damn missile.

Yall can say I’m wilding, I’m just keeping the same energy.  These muthafucaks ruined the exterior and interior wall decor for them island Eldians. Mikasa talkin’ bout some, ‘Eren you killed civilians, children, and shit you can’t come back from’. Far as I’m concerned that Tybur’s speech was hate speech. Ayebody cheering caught them repercussions early.  So, It was ‘fuck these folks’ before the time skip and it’s still fuck these muhfuckas after the time skip too. It’s only been 6 episodes, I know I ain’t attached to these kids. I’m not saying it’s right, I’m just saying, Anakin Skywalker told us and showed us that these younglings can get it too.

William: I say this as a proud father: Fuck them kids man, and I hope their ghosts get eaten by Eren too. They gave us the first four episodes in Marley and listen AoT, I appreciate the worldbuilding, but if you think for a second that I’m taking any of these little race traitoring bastards over my Paradis Island Devils, you out your fucking mind. Survey Corps till I die, bury me with my maneuverability gear and two thunder spears crossing my chest like a sarcophagus.

But before we bounce, it looks like we got another rematch coming. Eren with new warhammer powers vs Reiner with the Doomsday armor on. Who you got fam?

Omar: Reiner betrayed the crew and you know what happens when someone does that. They gots to fucking go. Mans gotta get deaded. This is street shit now and Eren gotta put the hammer to’em. Literally. Oh, y’all feel bad for Reiner cause he’ss having trouble living with what he did? That guilt eating him up? Woooord? *nods* Okay. Eren can help him by sending his ass to Bertholdt for the therapy he needs.