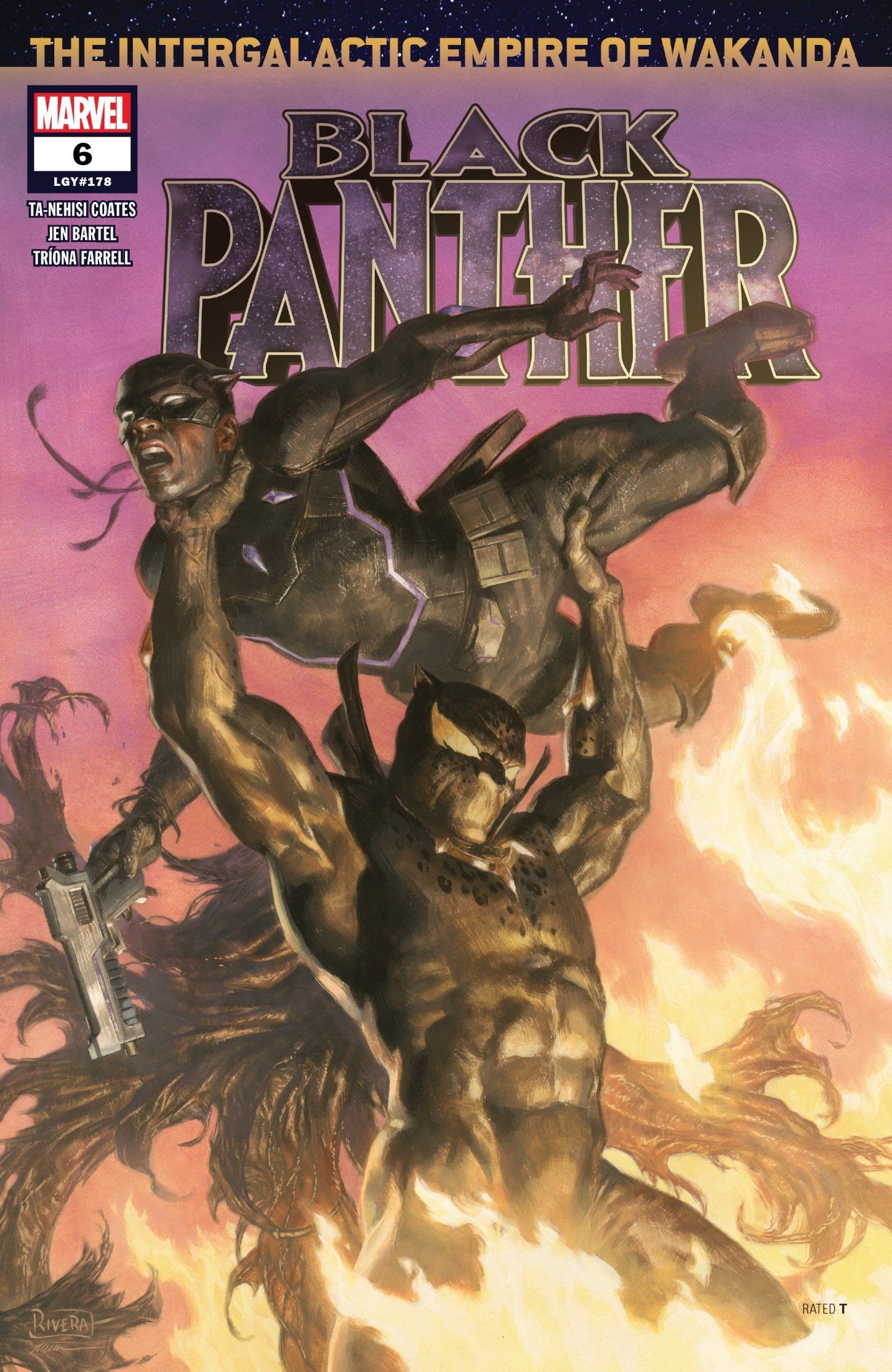 Six issues into the saga of the “Intergalactic Wakandan Empire,” BP scribe Ta-Nahisi Coates reveals the origins of Emperor N’Jadaka’s power and ascent to the throne. After five issues of focusing on T’Challa and the Maroons, the series turns its gaze to the dark side, and believe or not, the Klyntar (symbiotes, folks!) and the Orishas themselves play an unexpected role. 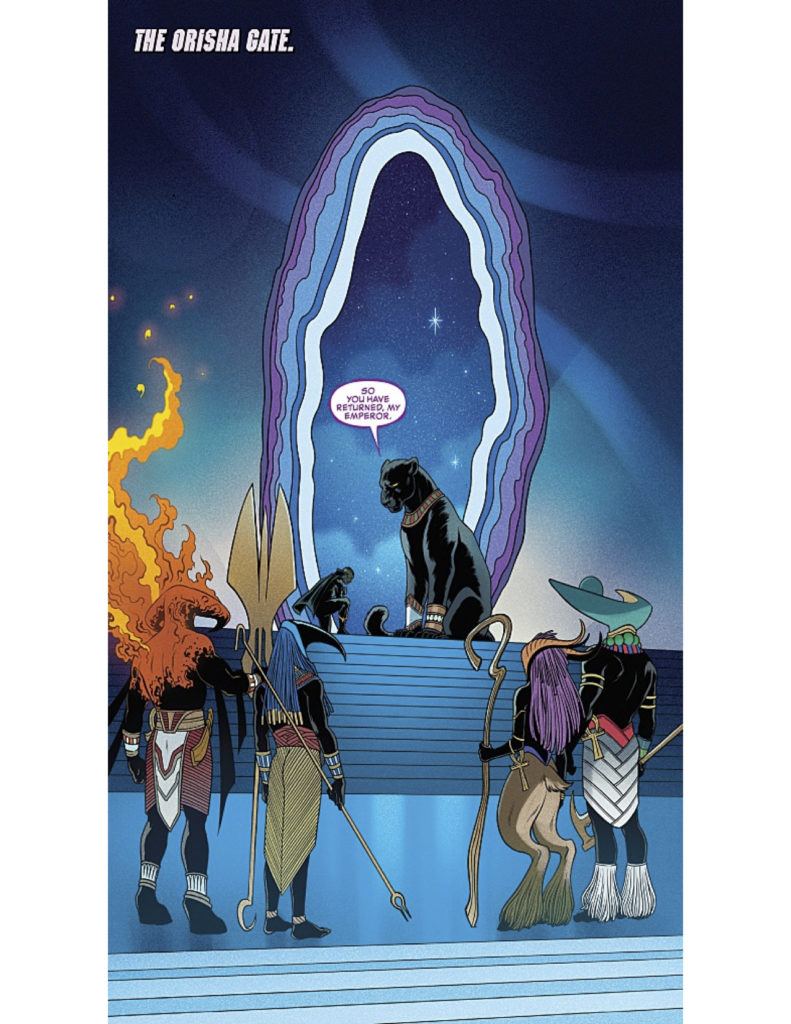 Pan-African spirituality, mythology, science fiction, and the Marvel Universe collide in the most beautiful and tragic ways in these glossy pages. Emperor N’Jadaka (that’s Killmonger for your new jacks) travels to the Orisha Gate, the portal to the realm of the Wakandan deities.  He seeks an audience with Bast, panther goddess and spiritual center to the Wakandan Empire, because he fears that T’Challa will usurp his rule and become the true avatar of the deity.

“Conquest was the only defense.”

Bast herself recounts the rise of young N’Jadaka, an idealistic mercenary with hopes of protecting the empire through expansion and preventative aggression.  His ambitions are almost thwarted by a jealous king who realizes that N’Jadaka’s name is chanted and praised more than his own.  When the king turns on him, N’Jadaka and his followers are driven to find allies in a species almost driven to extinction  – the Klyntar.  The symbiote species (the Venom, Carnage, Scream, et al. family tree) binds with N’Jadaka, endowing him with the power necessary to become “a soldier no more….but one who seeks godhood himself.”  His ambition and vanity, however, do not end there.  Just as the young upstart turned on the previous Wakandan leadership, N’Jadaka turns on the goddess herself. 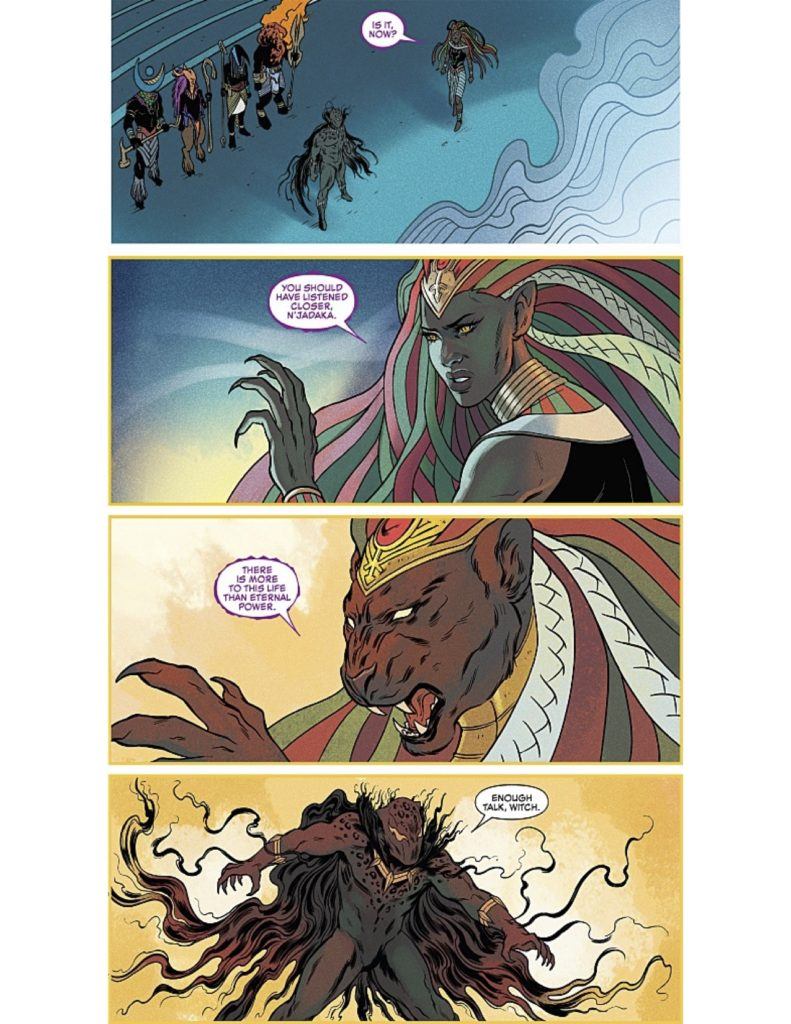 Issue Six is an epic return to form for Coates’ Black Panther run after the previous issue seemed to take a narrative and emotional step backward.  In giving this reality’s N’Jadaka a complex backstory involving both the Wakandan gods and the Klyntar of Marvel mythos, Coates flexes his confidence in crafting comic book stories that are emotional, political, and fantastical without becoming too heavy handed.  Jen Bartel fills in on pencilling duties, allowing for a stylistic shift that captures the looming feminine prowess of Bast and the internal fears and desires of N’Jadaka.  Whereas series regular Acuña excels in crisp, science fiction operatic adventure, Bartel brings her own vibrant and fantastical visuals to an issue where humans and gods become one. She renders the fight between N’Jadaka and Bast as clean, kinetic, and tense panels, highlighting the feline qualities of the two combatants.

At this point, we can assume that this midpoint in the “Intergalactic Wakandan Empire” saga is building up to the battle royale guaranteed to shake several galaxies – T’challa vs. The N’Jadaka.  Gods, mortals, and symbiotes beware.