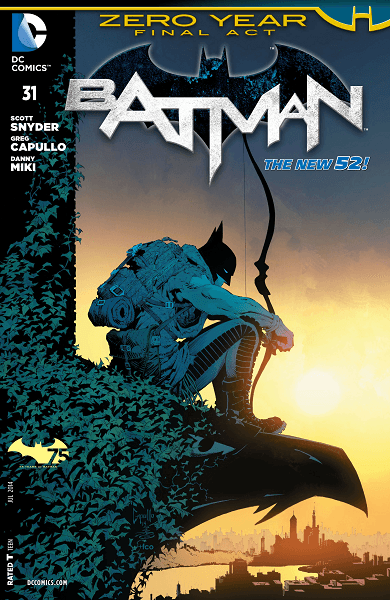 As the “Savage City” run of Zero Year continues, Batman and his allies are pooling their resources to put an end to the Riddler’s grip on Gotham City. The result is a bold plan to turn Nygma’s smarts against him with the possibility of rather fatal consequences. Snyder does a great job of conveying how bad things have gotten in the city without making the book an overall downer. I wrote a blog article once about how the way Batman has been written in recent years makes him seem entirely too invincible and omniscient. I mean, it’s understandable that the attraction of the character is that he’s a guy without powers who contends with alligator-men, evil space demigods and earns the respect of Kryptonians and space cops with magic wishing rings. But at a certain point, how many steps ahead of EVERYONE ELSE do you need to be before it basically becomes a superpower? I can’t stress enough how refreshing it is that this is a version of Batman that break those chains. Snyder gives us a Dark Knight Detective who makes mistakes, shoots from the hip, leaps before he looks with a smile on his face much like Daniel Craig’s James Bond. We also see Bruce Wayne as a young man who is overcoming a brand of PTSD via flashbacks and nightmares.

I’ve mentioned this before, but it is STILL astounding how much credibility Snyder has returned to the Riddler. This is a villain who has been everything from Selina Kyle’s throwaway sidekick to a vigilante detective over the years. Zero Year has been a redemption round of sorts that has brought Edward Nygma back to truly diabolical greatness that we haven’t seen since the animated series from the 90s (look for the episode “If You’re So Smart, Why Aren’t You Rich?”). Greg Capullo deserves a lot of the glory for delivering top form artwork this month. His action beats pull off a great marriage of fun and intensity all in one visually arresting package. The Bat-stans will be talking for years to come about that one time Batman single handedly fought apex jungle predators basically nothing but his wits.

Bottom Line: Zero Year has been breathing fresh life into the Batman mythology and this issue has done NOTHING to stop that. If you’ve ever been a fan of Batman, you need this book in your hands.  9.5 out of 10.