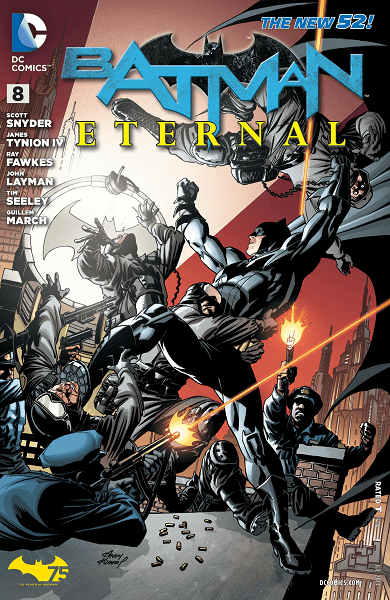 Batman’s having a pretty good week between Scott Snyder’s latest installment in the final chapter of Zero Year and this week’s issue of Batman Eternal. This seems like a really fun game among writers passing an ongoing story from person to person, picking up where the last person left off, putting a different take on narrative as they go. Though there has been some questionable turns on artwork, this book has mainly been a winner.

Issue 8 has Tim Seely handing the scripting baton off to John Layman this time around. His handling of the script is very fluid and a lot less chaotic than what we’ve seen the past couple of weeks. This week, the Penguin/Falcone war has Batman working overtime all over the city. Saying our hero has his work cut out for him is an understatement. Whether it’s by land or by sea, the man’s got places to go, people to see and faces to rearrange, hammering the point home that the underworld still isn’t safe in Gotham no matter how bad things have gotten. Though Batman juggling his struggles with organized crime and the police is a focus, much of the story centers around GCPD new guy, Jason Bard. Throughout the years of Bat-mythos, we’ve always seen some of the crime element from the man-on-the-street level, but it’s usually from people who have lived there most of their lives, jaded by their overexposure to it. As Bard finds himself still getting his bearings, seeing the city’s woes (a couple of which are within the department itself) from a fresh eyed outsiders perspective makes for a surprisingly good read. Meanwhile, this also leads to a very satisfying showdown between Batman and the police under the leadership of the cartoonishly corrupt Commissioner Forbes. Layman even finds a page or so to masterfully squeeze in the last known whereabouts of Stephanie Brown through a well placed flashback. Depite the musical chairs game this title plays with the artwork, Guillem March’s pencils handle the overall aesthetic theme of the artwork very well. It’s almost the best I’ve seen from series thus far. The best highlight (aside from his depiction of Carmine Falcone) is probably in the first few pages that show us Batman’s hard night’s work taking on criminals all over Gotham.

Bottom Line: For all the material and characters it juggles, this week’s Eternal is a really strong, well paced one that might just be the best looking of the series so far. 9 out of 10.