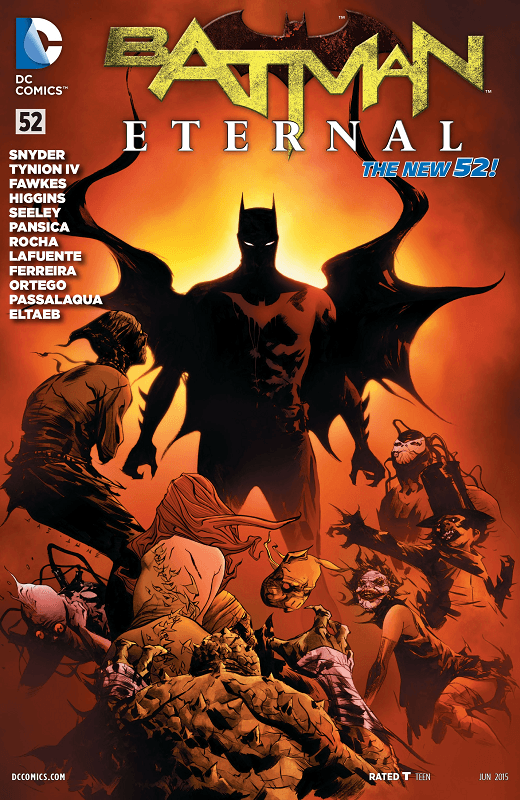 I’ll be upfront right off the top. I’ve been convinced for some time that any year-long event DC puts out is destined to be a letdown. 52 left me wounded like a jilted lover. A compelling year long saga without the Trinity and it all amounted to…well, I’m still unsure about what happened at the end. The point is I’m more skeptical when something has more buildup than usual. So part of me was ready for Batman Eternal to let me down.

This final volume has been so ridiculously spot on, truly capturing the scope of the mystery menace that has been looming over Gotham all this time, it felt like the big finish would have no choice but to fall short of its own aspirations. However, I am pleased to report that any such fears can be erased now. The lion’s share of the book is dedicated to the final showdown between Batman and the real power that took the leashes off of Gotham’s meanest. It really does invoke a great deal of the themes that Scott Snyder has established since the beginning of his tenure working on the Bat-verse. James Tynion IV delivers a script that sings of hometown pride and what Batman’s legacy means to the people of Gotham. Meanwhile, things wrapped up surprisingly neat with the rest of the Bat-family, Selina Kyle and even the super shaky “redemption of Jason Bard” plotline. This issue and, really, the series as a whole did a great job of telling Batman stories in a light we haven’t seen much of in a while. Instead of the usual narrative we’ve come to know where Batman overcomes all on his own through sheer force of will and his preparedness in the face of absolutely EVERYTHING, the story leans hard on the history of Gotham and the resilient spirit of its people. 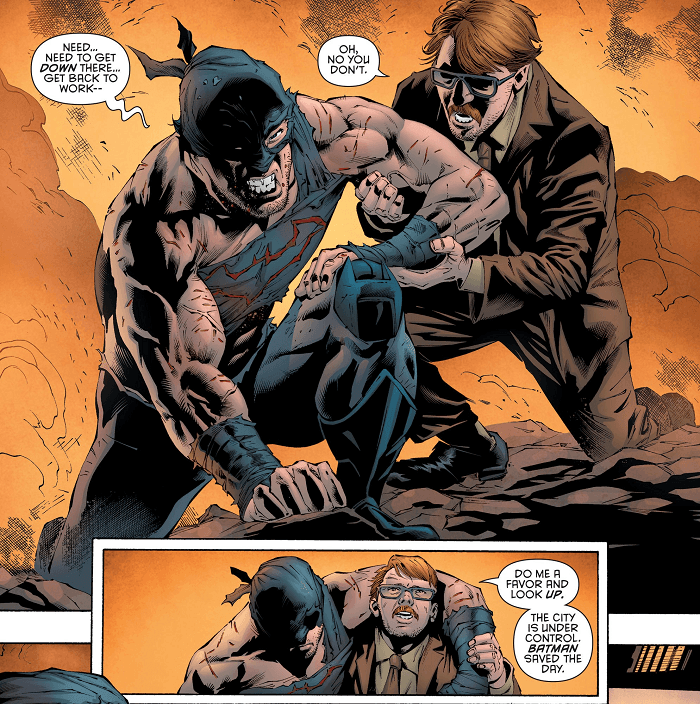 As I mentioned in one of my first reviews of the series, everything about Eternal reads as a love letter to Batman’s beloved city. Meanwhile, the artwork is a fucking Murderer’s Row of good talent. The lion’s share of the linework was done by Eduardo Pansica and Julio Ferreira and it was a spectacular sight to see. The final fight is a departure from the usual premeditated, precision battle and is ultimately just a knockdown, drag-out street fight. It’s a thing of beauty to see Batman foregoing all the hyper analytical Sherlock Holmes shit to get down and dirty. There were quite a few other artists with smaller contributions, but the ones that deserve the most notable commendations would probably be Guillermo Ortega and David LaFuente. Despite there being so many cooks in the kitchen, it all gelled together quite well in the end right down to the obligatory Batman/Jim Gordon post game debrief.

Bottom Line: It wasn’t perfect, but it was a somewhat sentimental (for Batman) blockbuster ending worthy of all the first issue (and preview in Batman) teased originally. I’m going to have fun reading this over from the beginning. 9 out of 10.