One of the oldest cliches is probably one of the most true ones. War is Hell. 75% of Beasts of No Nation, based upon the novel by Uzodinma Iweala is an all-expenses-paid trip through Hell. Netflix’s first feature film is a curious one as it follows the story of (eventual) 14-year old Agu, a rambunctious kid who watches his family gunned down in front of him by a corrupt government-sponsored army. Agu escapes the gunfire into the jungles of West Africa only to run into something far more treacherous.

It’s here where Agu’s story merges with a guerrilla warlord, the Commandant, played by Idris Elba. It’s funny how the previous 15 minutes of the film, detailing the beginning of the war and rebellion in Agu’s town, does not prepare you for the immediacy of his inclusion into Commandant’s army [quote_right]Elba could very well be one of the best actors over the last fifteen years[/quote_right]– Commandant’s adolescent boy army. The story continues to follow the development of Commandant’s army and the degradation of the boys enlisted in it. The drama moves from town to town, focused on taking back the capital, a destination special to Agu as he believes that’s where his mother and sister are. 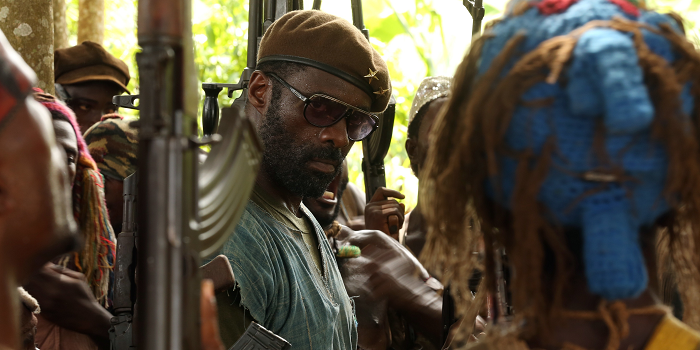 This might be Agu’s story and Abraham Attah’s debut performance is very strong and rife with potential, but this is Idris Elba’s show. He is magnificent as the perhaps the most visible villain in a movie that is saturated with them. As with any good villain, Elba’s Commandant is charismatic and commanding on screen, both relatable and repulsive in his speeches to the boys and actions. The performance is complex and engaging in a scenario that has very few straight lines. You won’t ever forget what kind of a monster the Commandant is, but you are often put in the position of empathizing with the plight of giving the boys some kind of agency when they stood helpless to watch their families and loved ones slaughtered.

Of course, war has the potential to make men less than human, so the exponential damage done to a group of pre-teens and teenagers is even harder to watch. Elba is often given a lot of credit as a great actor and being highly sought after (well, usually), but he may still be underrated. Elba could very well be one of the best actors over the last fifteen years, and this performance only strengthens the claim.

And you will watch all the horrors as acclaimed director Cary Fukanaga is behind the camera to navigate us through war torn West Africa. Everyone can show violence on a visceral level these days, but Fukanaga excels at showing the true barbarism that accompanies the violence. It is hard to watch without being exploitative or indulgent. It is, essentially, a new heartbreak in every scene. I’m not sure if it was harder watching Agu’s first kill or his comfort with his tenth kill. Because of the environment we’re exposed to early on, every time women enter the frame, we know the worst can and might possibly happen. Agu’s transformation from harmless and carefree trouble maker with his family to hardened killer that resembles an African-child version of Full Metal Jacket shows that certain circumstances can corrupt anyone. Especially those that don’t have much of a choice.

As far as Fukanaga’s work, it is visually amazing in the colorful tragedy he paints. Many of the camera shots of Agu are narrow and almost claustrophobic, which gives the illusion that even in this large world, Agu is mostly inside his own head and its ever-changing state. In relation, Commandant is almost always surrounded by boys in many of the sprawling shots with few selected close ups unless they include another young boy in the shot. This tells you everything you need to know about his relationships to boys, which is almost exclusively harmful. 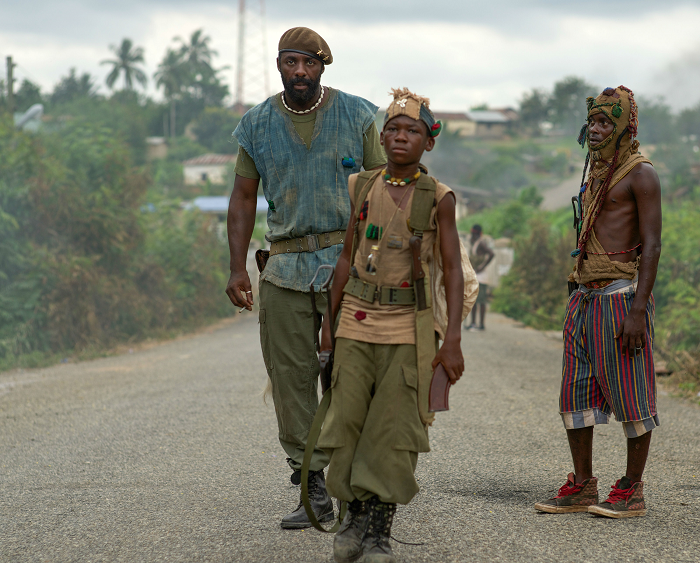 While most of the movie focuses on the war, I would be remiss to not mention how much joy the beginning of the film gave me. The boys, not in school because of the insurgency, but not yet in harm’s way, are carefree and unapologetic in ways we don’t often see them. For all the stereotypes about the social environments of West Africa, it was beautiful watching the boys do their “Imagination TV” performances for the soldiers or watching Agu’s brother dancing in their room. It is, of course, all a set up to the devastation you’ll experience when the war starts in earnest, but I appreciated the film starting with that kind of celebrated Blackness. 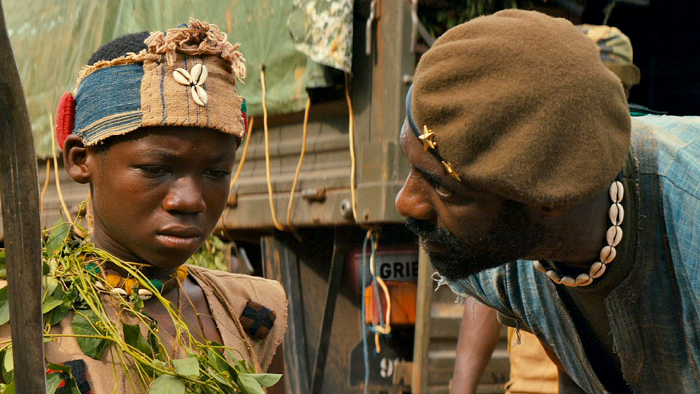 There is no redemption song in Beasts of No Nation, or silver lining. The film shows that the casualties of war can go further than body counts and territories gained. The demoralization, abuse, and trauma that Agu suffers is center stage under the guise of possibly Elba’s best performance makes this a tough, but rewarding watch. As this is Netflix’s first charge into feature films, they have set a pretty high bar for themselves.